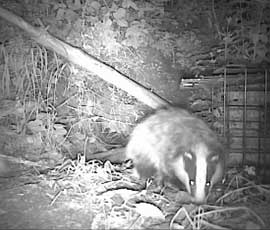 The vaccination programme is part of a wider effort to tackle the disease in England and began in the spring. But in some areas of the West Country, vaccinations have been delayed by four weeks after continuous rain.

An NFU spokesman explained that vaccinating badgers was heavily dependent on the weather because of guidelines on animal welfare.

Badgers cannot be left confined in traps if the weather is bad enough to put their welfare at risk.

“If traps are set at midnight, it could be up to six hours before an animal is vaccinated and released. So we have to watch the weather carefully and postpone trapping until we can be sure it will be dry enough to go ahead,” the spokesman said.

Other than the welfare of the animal there are additional complications.

“Because we revisit traps over many days and weeks it really disrupts the land. The ground is in a bad way along our access routes to some setts,” the spokesman said.

“On this evidence it is difficult to see how vaccination would work as a lone strategy to control the disease,” he added.

In Wales, too, a vaccination programme is underway. Unlike DEFRA, which has proposed to use vaccination in conjunction with a badger cull, the Welsh Assembly Government is relying on vaccination as its main thrust to eradicate bovine TB.

Wales’ environment minister, John Griffiths, said: “The vaccination programme is aimed at developing a degree of immunity to TB within the badger population. We believe this will reduce the risk of transmission from badgers to cattle.”

The official start date on a 288sq km area of south-west Wales was Monday 11 June but vaccinations began as part of training six weeks ago. In that time just 275 badgers have been trapped and vaccinated.

NFU Cymru deputy-president Stephen James commented that badger vaccination was laborious and expensive and would not solve the problem of TB on its own.

“Vaccination is just one of the tools needed to tackle the disease but it won’t cure badgers that are already infected. So in the trial area, which is heavily infected, it cannot possibly eradicate TB,” Mr James said.

The NFU supplied the video below showing a badger entering a trap, pre-baited with peanuts and left open for a number of days, prior to setting for capture..