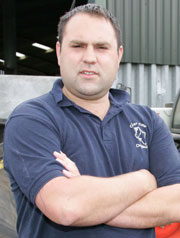 Calving has started at Dewsbury. Oli and the team has 270 cows to calve over the next three months, with about 200 in the next six weeks. Cows are out at grass most days, although a large amount of rainfall recently has prevented this from becoming an everyday occurrence.

In Lincolnshire, we welcome back Mike to the team after a year milking cows in Leicestershire. Mike will be joined this summer by his girlfriend and former middle-year student Laura, together taking the job on of day-to-day management of the herd as we hope to calve 350 this next autumn.

The main issue for us at the moment is cell counts. There is nothing more depressing than throwing 500 litres of milk a day down the drain, especially as not so long ago we were using a large amount of milk powder. But, of course, most of the calves are now weaned. One idea we had for this milk was to launch a rival to “pro biotic”, called “pro antibiotic”, we could certainly offer this in two ranges, clinical and sub-clinical.

On persistent cows, we are going to dry off early any in calf and cull the ones not, an interesting observation is that as of the end of January 50% of the main herd was PD positive. However, only 10% of the high-cell count group were.

Employee of the month was hard fought over in January, with a bent bale spike and a smashed tractor door. My personal favourite was when one of the students noticed the red leg bands on an antibiotic cow were covered in gypsum dust, so spent five minutes cleaning them for easier identification – well done… until she promptly put the unit on the cow. Team Harper gets the award this month.