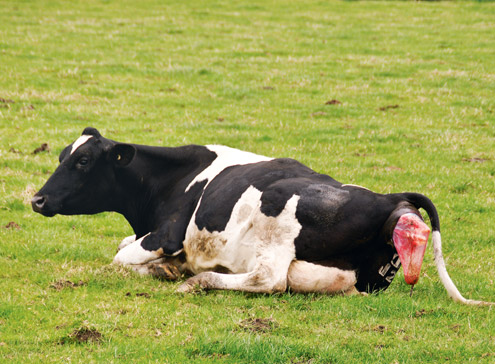 Neospora caninum, as the name suggests, is primarily a parasite of dogs. In most cases infection is asymptomatic although, particularly in young animals, it can cause an ascending paralysis and encephalitis that is usually fatal.

Even without symptoms, vast numbers of infective oocysts can be shed in the faeces.

Cattle are a secondary host for this protozoal parasite, with its role in causing abortion first being identified only relatively recently.

It is now, however, one of the most commonly diagnosed infectious causes of bovine abortion in the UK, although the cause of the majority of abortions, even when they are reported and investigated, remains undiagnosed. Abortion is not, however, an inevitable consequence of infection.

How does infection occur?

Cattle can become infected with neospora in one of two ways. The first is by inadvertently ingesting dog faeces containing a heavy burden of oocysts.

The role of foxes in the transmission of this parasite continues to be debated, but there is currently little evidence that this is significant in the pathogenesis of the organism.

The second is by vertical transmission – calves born to infected dams are highly likely to be congenitally infected with the organism. Horizontal transmission from cow to cow is not a feature.

Currently there are no treatments available that will eliminate the parasite from infected cattle, so infection, once established, is considered to persist for life.

Nor is there any vaccine available that will prevent infection. Effort must therefore be focused on preventing animals from becoming infected.

Dogs can become infected by eating infected bovine material, particularly aborted foetuses and cleansings – hounds fed on such material may constitute a particular risk to cattle.

So removing such material from the farm environment and disposing of it hygienically is important in breaking the lifecycle of the parasite.

It is also important to try to prevent dogs defecating in areas where cows might be put at risk of ingesting the faeces, for example in feed troughs, along silage faces or particularly in concentrate stores from where the faecal material may be distributed amongst a large number of animals via the mixer wagon in a TMR.

Control within groups of cattle presents a different challenge and currently relies on trying to identify infected animals and manipulating breeding strategy so that animals that are likely to be congenitally infected are not retained as herd replacements.

Within the dairy industry this has essentially been portrayed as a “breed-to-beef” policy. However, where dairy cross heifer calves are sold, either actively or inadvertently, to be used as replacement suckler dams, this will simply move the focus of infection from our national dairy herd into our national beef herd.

The major challenge remains the identification of infected cows. The health status of breeding bulls seems immaterial given that adult-to-adult transmission is not a feature.

ELISA testing can be carried out to screen blood samples for antibodies to the parasite, but antibody levels fluctuate widely and infected animals frequently have circulating blood antibody levels that are below the limits of detection.

To maximise the probability of correctly identifying an infected animal it is recommended blood samples for testing are collected during the period around calving.

Serological investigation into the health status of young calves has been advised in the past with a positive result – indicative of either in-utero challenge or colostral antibody transfer – being interpreted as confirming calf and maternal infection, but this is no longer advised.

Examination of material from aborted foetuses can, however, be useful, particularly testing foetal fluid for antibodies to the parasite and histopathological examination of foetal brain to confirm infection in the dam.

Once confirmed infected, a cow should be considered infected for life and although negative results should be interpreted as just that (negative rather than confirming the absence of infection), efforts should be made to breed herd replacements, perhaps by the increased use of sexed semen, from test negative dams. This, of course, can present real challenges in high-prevalence herds.