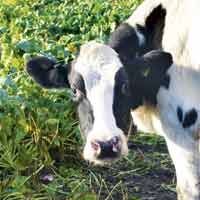 Out-wintering a herd of dairy cows, feeding no grass silage and providing shelter in cubicles with no sides and only an “umbrella-style” roof, would be a system in which few dairy farmers would have confidence.

But at a time when modern cow systems focus on all-year-round housing and complex complete diet rationing, a Cheshire farmer is bucking the trend.

John Cottle’s 200 Holstein milkers are thriving on a regime that has abandoned winter housing. Bought-in feed costs have been slashed at Birchenfields Farm, near Chester, where he’s achieving a herd average of 8700 litres feeding only maize silage and allowing cows to strip-graze stubble turnips from October until March. The herd, which is paddock grazed in the summer, maximises milk production from forage on an extremely low cost system.

“The land is free draining, light and sandy and we’ve got 110 acres of grass around the farm. In the summer we paddock graze on a 12-15-day cycle and offer buffer-fed maize silage – both self-feed and in troughs. In the winter, cows strip graze 15-20kg of turnips a head a day at around 18% dry matter,” says Mr Cottle.

Current figures show more than 4900 litres of milk are produced off forage with a concentrate feed cost of 4.6ppl. Based on a 24ppl milk price, the herd is producing a margin over feed of £1712 a cow – at least £220 a cow above the UK average.

The unconventional system evolved several years ago when the farm started growing kale for strip grazing until after Christmas. But a switch was made to fodder beet and the extended grazing system with the out-wintering gradually took over.

Having to bring cows in for milking on dark winter mornings is considered to be only a minor drawback of this low-cost, simple system that’s producing an excellent margin from hardy, healthy cows – and reducing the amount of slurry that has to be stored and spread into the bargain.

“The cows lie behind the turnips during the winter or come back to the farm and use the open-sided cow cubicles, but a lot prefer to stay outside all the time. We feed the maize silage all year round and add rape meal when we ensile it. We’ve increased the rape meal so every cow gets about 2.25kg a head a day – we’ve done that so we can marginally reduce the amount of concentrates we feed in the parlour,” says Mr Cottle.

The cows have constant access to stubble turnips and the electric fence is moved about two yards a day. The turnips, maize and rape meal meet the needs of the first 30 litres of milk, with concentrates fed above that level of production to a maximum of 7kg. Cows eat about 45-50kg of maize silage a day.

The outdoor cubicles were designed by Mr Cottle and are completely open – apart from the roof – because it was clear to him his cows preferred to be outside rather than in. Even though cows are grazing the stubble turnips in the winter, dirty udders aren’t a problem.

“General cow health is very good – rolling cell count is 150,000 (below average on comparable milk yields) – and foot problems have improved since we built the new outdoor cubicles.”

Dry cow management has been reviewed in recent years and now it’s the only stage of the cow’s year when she’s fed any silage. The 40-day dry period sees cows given ad-lib big-bale grass silage, plus 10-12kg of maize silage with 2kg of specifically formulated dry cow nuts.

“It’s given them extra fibre and energy because we were hitting some sub-clinical acidosis problems before calving caused by the intake of ad-lib maize silage. There was a lot of energy and starch going in, but the diet was short on protein.”

Andrew Holland of Shropshire-based Ontrak Nutrition says that while the Birchenfields Farm system is unconventional, its success should trigger wider debate on a host of management and nutritional issues.

“What’s happening here could provide some innovative options for other dairy farmers. Those who have believed the only way forward for their business was to become more intensive and house cows all year round may now re-consider if they’ve got light land that will support cows outside during the winter.

“But a feeding system that relies solely on maize silage is radical to say the least – yet it’s extremely successful. So where does that leave us in terms of how we’ve been valuing grass silage and the overall forage needs of the cow?

“This system shouldn’t be regarded as a one-off. It could well be a blueprint for the future for other dairy farms. It’s ironic that at a time when issues surrounding the intensification of dairy farming are so topical, here we have the complete opposite – and it’s working, and it’s profitable,” says Mr Holland.

He admits that according to traditional nutritional evaluations of a cow’s forage requirements, this is a herd being fed a diet with inadequate fibre, too much starch, too much sugar and low on protein

“In any other situation the immediate reaction would be straightforward – let’s buy a complete diet feeder and get some grass and some straw in the mix. But here we’ve got a maize-driven system feeding 6-7kg of cake and with cows giving up to 55 litres – so you have to ask why?

“There’s no doubt this is a system that doesn’t match any of the computer software on cow nutrition. It blows holes in a lot of the benchmarks nutritionists work to, so we’ve got to look at the reasons why it is working and what implications it can have on farms that could adopt similar systems – or even those who don’t want to out-winter, but want to consider a higher dependence on forage maize,” says Mr Holland.

He believes other farms feeding 45kg of maize, 15-20kg of fodder beet and topping-up with concentrate in the parlour would soon have an acidosis problem.

“But here the cows are on virtually self-feed maize which is promoting cudding – and even the maize being fed in the troughs is direct from the clamp so it’s in a “raw” state and isn’t being chewed up in a diet feeder. This isn’t like the forage soup you see being fed on some farms.”

Mr Holland says the typical analysis of any maize silage sample will produce an NDF of around 38. But from his experience with eastern European dairy units he believes the NDF values of these forages is being underestimated.

“Different analysis techniques have suggested that the NDF is 10-12% higher than we think, so there’s a lot more fibre going into these cows – plus there’s the maize by-pass starch and the sugar. In our UK cow diets we’ve always had an issue over not being able to get enough starch into our cows without running into an acidosis problem. But get starch into the rumen and it starts to fire cows up to make maximum use of the forage with maximum milk protein production – this gets cows in calf – and that’s why it’s working here.”