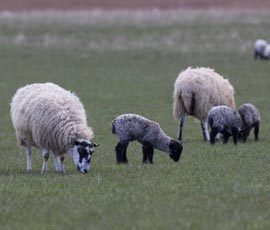 Key figures from the farming industry voice their support for the continuation of Farmers Weekly‘s Stamp Out Lameness Campaign.

Controlling lameness has been a constant challenge with the weather conditions in the past 12 months. The Stamp Out Lameness campaign really helps by giving sound, practical advice on how to reduce lameness and it is good to see it continue.

Lameness in sheep is a nationwide problem with considerable welfare and financial implications. There is a definite need for the industry to work together and ensure there is easy access to appropriate advice and information in order that the number of lame sheep in the UK is reduced.

Quality Meat Scotland backs the Farmers Weekly Stamp Out Lameness campaign. Sheep lameness is a worldwide problem and a severe drain on the farming industry. Aside from the welfare implications for the affected animals, the wider impact of lameness includes loss of productivity, reduced reproductive performance and weight loss.

HCC welcomes this important industry initiative to reduce lameness in the UK sheep population. All flocks will experience some degree of lameness, but the important thing is to recognise what is causing the problem and know how to treat and control it. Further information on this and other health issues is available on the HCC website.

Through adopting the five point plans at FAI we now have a lameness incidence of less than 1%. Farmers don’t have to accept sheep lameness as the norm and as an industry we shouldn’t. Getting on top of the problem makes sense as it reduces labour inputs and maintains welfare and profitability.

There’s huge benefit to be derived from adopting the five point plan by improving flock health and reducing labour. We have a duty of care to our flock and also to improve public perception of sheep health and welfare.

Farmers can’t be criticised for having a health problem in their livestock, but they can be criticised for not doing anything about it. In too many cases foot-rot is something accepted as being part of keeping sheep. The five point plan for eliminating lameness outlines practical steps for farmers struggling with lameness; improving sheep welfare, improving productivity, and reducing time wasted when problems get out of hand.

Sheep production plays a significant part in the management of the 160,000ha of grazing land on National Trust farms across England, Wales and Northern Ireland. We welcome the effective systematic approach to tackling sheep lameness promoted by the Stamp Out Lameness campaign. This will provide long-term benefits to welfare, husbandry and productivity.

The RASE is delighted to support the Stamp Out Lameness campaign which promotes the five point plan to reducing lameness in sheep. The plan brings science together with practical on farm application to help reduce lameness. This will not just bring financial benefits to farmers, it will make a major impact on a significant welfare problem and can only improve our public image.

Controlling lameness has been a constant challenge with the weather in the past 12 months. The Stamp Out Lameness campaign really helps by giving sound, practical advice on how to reduce lameness and it is good to see it continue.

Duchy College’s Healthy Livestock project has targeted the control of sheep lameness on its 18 south west monitor farms, reaching more than 2,500 sheep farmers. A survey showed 52% of them became more aware of lameness issues with a further 22% making substantive changes to reduce lameness. We fully support the Stamp Out Lameness Campaign to extend Healthy Livestock’s success across the nation.

AssureWel is a collaborative programme led by the RSPCA, the Soil Association and the University of Bristol, which has a primary aim of embedding welfare assessments into farm assurance schemes. Assessing and monitoring key welfare issues is critical in enabling producers to understand the level of existing conditions on-farm and to determine the efficacy of interventions to help meet Farm Animal Welfare Council targets. AssureWel therefore fully supports the Stamp Out Lameness campaign.

High prevalence of severe lameness in UK sheep is a serious welfare concern. The current extent of the problem is awkward and unacceptable, because practical and effective management practices are well defined. The UK sheep industry must take lameness control seriously, and the Sheep Veterinary Society fully supports the initiative focusing on preventive management that has been taken by the Stamp Out Lameness campaign.

Recent efforts by a number of dedicated shepherds in association with ourselves and the University of Liverpool to use the five point plan to tackle sheep lameness has seen definite results in local flocks. These steps are practical and surprisingly easy to implement.

Campaigns such as Stamp Out Lameness increase awareness and we hope this will allow us to continue to work with our farmers to reduce lameness, increase profitability and improve welfare.

Lameness remains an enormous challenge to our industry. No flock can afford the costs associated with high levels of lameness, in either financial or welfare terms. The five point plan is a clear message and it works. I would encourage farmers to engage with their vet and work out how to implement each aspect of the plan in their own flocks.

Find out more about our Stamp Out Lameness campaign