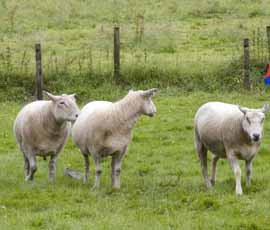 Sheep liver condemnations at a leading Welsh abattoir due to fluke are nearly three times that of its English counterpart.

Dunbia statistics show condemnations at Llanybydder abattoir, Lampeter, have averaged 18.13% from July to December 2011, compared to a 6.65% average in the same period at Dunbia’s Preston site in Lancashire.

Dunbia, which is working with Novartis Animal Health to monitor condemnation rates, said the highest daily figure recorded so far at Llanybydder was in September, when 29.9% of 4,752 sheep livers were condemned due to damage from fasciolosis.

Jim Hopkins, a vet with Steffan Veterinary Services, described the fluke problem in his area of Wales as “endemic”.

“West Wales is mild and wet, which is ideal for both grass growth and mud snails, which favours the liver fluke life cycle. Many lambs are outwintered and fattened on grass, exposing lambs to higher levels of liver fluke.

“This year we have had a very mild autumn, which will have created optimum conditions for fluke to thrive,” he said.

Mr Hopkins said most of his clients were well aware of the fluke problem in the area. “Fasinex,or triclabendazole, is heavily relied upon in this area, and we encourage our farmers to test and discuss their treatment plan with us,” he said.

“The Welsh Government’s Farming Connect Scheme offers subsidised advisory and planning services for farmers, which allows us to advise and discuss individual plans and requirements,” he said.

Novartis vet advisor Saul Harvey said the figures for ovine condemnation at Llanybydder had been consistently higher than those at Preston.

“We are very concerned about the level of condemnation, which is having a serious welfare and financial impact on farms in this area of Wales. I would urge farmers to be particularly vigilant about the threat of fluke and plan with their vets and animal health advisers accordingly,” he said. “Liver fluke is dependent on snails for part of its lifecycle, and so the incidence of fluke is related to the conditions affecting the snails. Warm, wet conditions create the most favourable environment for the snails to thrive,” he said.

“A good animal health plan is essential to ensure that adequate monitoring and protection is in place.

“We would recommend that farmers deal with all stages of fluke present at the time of treatment, including the early immature and immature life stages. Products containing triclabendazole (TCBZ) kill all stages of the parasite, unlike some compounds, which only control adult fluke.

“With the mild winter we have seen an extended fluke season, where we have snail activity and new infective cysts formed into late December and early January. These infective cysts are likely to survive on pasture right through February, so we will still see early immature and immature fluke infections.”