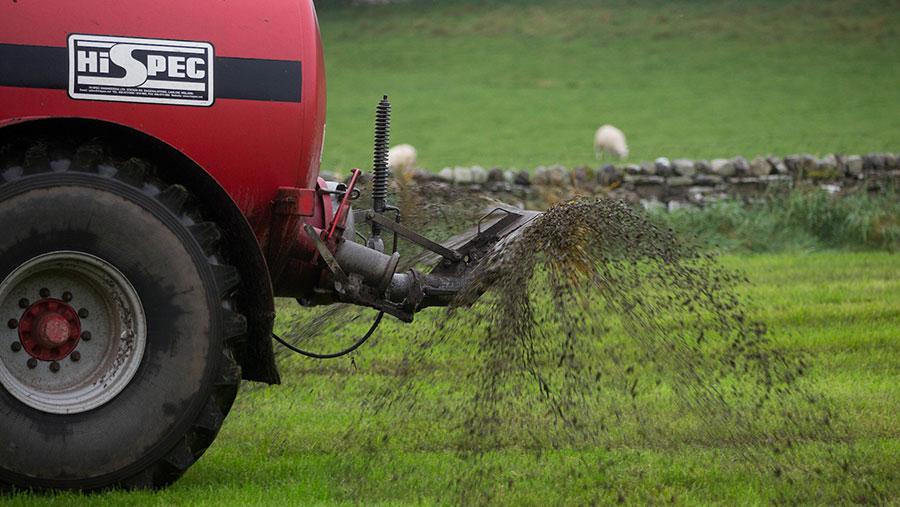 Farmers in nitrate vulnerable zones (NVZs) in England who believe wet weather will prevent them from spreading slurry before the 15 October deadline are being urged to contact the Environment Agency.

The NFU said some members had received up to three times their average rainfall on their farms in September. Heavy rain has hampered the spreading of slurry.

“We are hearing from members, particularly in the South West and the North, who are telling us they have experienced two to three times their average rainfall in September,” NFU vice-president Guy Smith told Farmers Weekly.

“That has caused delays in land work; in particular slurry spreading that has to be complete by 15 October due to NVZ and cross-compliance restrictions.

“Our advice to farmers with these concerns is to speak to their local Environment Agency Ag officer sooner rather than later who will look at their situation on a case-by-case basis.”

The NFU has alerted the agency about potential problems at a national level.

In Scotland, rain battered livestock farmers have been facing serious difficulties finding appropriate times to spread slurry. Prolonged spells of wet weather from June to September have left ground conditions unsuitable for any spreading to take place on many farms.

NFU Scotland asked Scottish government for a slurry-spreading extension to 30 October. But this request was turned down.

Under EU rules and as part of cross-compliance requirements, farmers in nitrate vulnerable zones have to respect the “closed period” for spreading slurry from 15 October to 31 January to tackle nitrogen losses from agriculture to water.