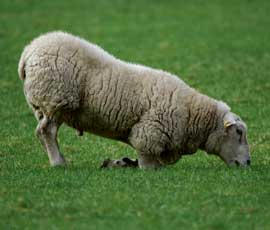 Are you a sheep farmer who fancies winning two tickets to this year’s Farmers Weekly Awards at the Grosvenor House Hotel in London? If the answer is yes, then why not get involved in Farmers Weekly‘s Stamp out Lameness campaign.

We are asking sheep farmers across the UK to complete an online survey to establish lameness incidence one year on from the launch of the Farmers Weekly campaign.

Farmers Weekly, together with MSD Animal Health, is launching the next stage of its Stamp out Lameness Campaign to aid farmers in their fight against lameness in sheep.

The campaign was launched last year to help meet the Farm Animal Welfare Council Opinion report recommendations to reduce sheep lameness to under 5% or less by 2016.

This year, Farmers Weekly will be running a four-week, farmer case study lead series to further tackle this huge welfare problem, estimated at costing the industry £24m a year.

A hit squad of experts will visit three farms over the coming weeks to assess how they can best implement the Five-Point Plan to control lameness. The team will be made up of sheep vet, Ruth Clements from FAI Farms and vet Joseph Angell, who is studying contagious ovine digital dermatitis at the University of Liverpool.

“Farmers working to implement the Five-Point Plan have shown foot-rot and scald can be problems of the past. With the right focus and commitment it is perfectly possible to significantly reduce lameness for the long term,” explains Ms Clements.

The short survey will run until 4 July. You’ll also be able to fill out the questionnaire at the Farmers Weekly stand (169) at the Livestock Event on 3 and 4 July at the NEC Birmingham. Fill out the survey now.

Read more about the Stamp out Lameness Campaign