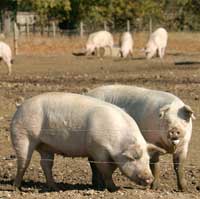 Worm infection in pig herds could seriously compromise the efficacy of Mycoplasma hyopneumoniae vaccines and knock millions off industry profits, according to Janssen Animal Health.

With pig producers already losing up to £6 a pig on worm-infested units, added costs from reduced vaccine performance could be “staggering”, says the company’s Phil Macdonald.

A study carried out by Danish and US pig scientists showed three weeks after vaccination, two thirds of pigs infected with the large roundworm Ascaris suum, failed to produce an immune response.

This was compared to 100% in the worm-free pigs during the same period. By the end of the study 22% of worm-infested pigs had still not seroconverted.

And with the large roundworm the most prevalent worm in pigs, it has the potential to seriously impact in vaccine efficacy.

Mycoplasma vaccines are used to help prevent enzootic peneumonia which, among other challenges, is estimated to reduce growth rate by up to 15.9% and increase feed conversion by 13.8%.

According to Janssen, producers spent more than £5,297,000 on M hyopneumoniae vaccines last year and are expected to spend the same this year – the potential impact of worms affecting seroconversion could be an immediate loss on vaccine costs.

“Two of the main problems on these units are that worming programmes are not based on the lifecycle of worms and they don’t cover all pigs in the herd.”

All the news from Pig and Poultry