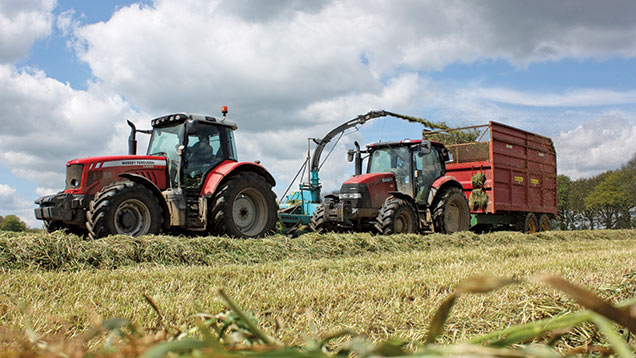 Since they were introduced more than 30 years ago, Mengele’s trailed SH40 forage-harvesters have sold in their thousands.

Heaps of DIY silage-makers like the ubiquitous machine for its simplicity and ruggedness.

Three decades on, it’s still basically the same beast under the skin, just the paintwork that has changed following Lely’s purchase of the Bavarian machinery maker in 2010.

The design of the SH40 (now known as the Lely Storm), is about as simple as it gets.

A belt-driven flywheel equipped with both blades and blower paddles chops and blasts material up the spout. Side-drives off the flywheel power the pick-up and on-board hydraulic system.

See also: A guide to buying a forager

Straightfoward as the design is, it’s not immune from abuse and does require regular TLC if the forager is to be a reliable performer. Here’s how the pre-season service shapes up.

Drop off the pick-up and pull all the guards off the forager to expose the chain-drives, belts and, most importantly, the blades and shear-bar.

A visual inspection of these critical wearing parts will give a good initial indication of how much work is going to be required.

Heavily pitted blades will suggest an unhealthy diet and if they’re damaged, there are likely to be more issues deeper in the guts of the machine.

To get a decent idea of how worn the shear-bar is, it needs to come out.

To remove it, the two coil springs that keep pressure on the feed-rollers need to be whipped off to allow the upper rollers to be levered upwards and blocked in place to get access right the way through.

With that done, remove the rubber bump stops that buffer the feed-rollers’ travel to get access to the shear-bar retaining studs.

The stops are often worn and cost £4.50 to replace.

Next crack off the four bolts securing the shear-bar in place (this might require a fair bit of heavy leaning as thread-lock is often used).

It can then slide out but be careful to take note of any shims used to trim up shear-bar alignment.

Set in the factory, these need to go back in the same place when the shearbar is refitted.

The shearbar’s hard-facing tends to wear in the corner nearest the centre of the flywheel first. A good clean edge results in a clean cut.

Rounded shoulders make for less accurate chop lengths and more power usage. The shearbar can be reversed once but after that it’s a £920 replacement.

The feed roller drive is probably the most mechanically complex part of the SH40.

Power is transferred from the front of the flywheel via chain-and-sprocket to a gearbox which spins two pto shafts that run the upper and lower feed rollers.

At the far end of the rollers, a further two chain drives transfer power between front and rear rollers.

The large chain between the flywheel and the gearbox takes a lot of flack and consequently is a regular contender for replacement.

To assess just how bad it is, whip it off and lay it flat on the floor. If you can form an arc more than a couple of inches deep over its 1.7m length then it’s probably shot.

To make a true judgement straighten it out to full stretch and measure its length.

Then squash all the links up snugly together and measure again to get an idea of slack.

Any difference greater than 20mm suggests it needs to be changed. Don’t be surprised if this is an annual event.

If in doubt about any of the other chains on the machine then repeat the exercise.

As regards the rest of the driveline, check all the pto shaft yokes for play. Usually it’s just the retaining bolts that need a quarter turn to pinch up any slack on the splined shafts.

Finally go round all the bearings with a prybar to assess their condition.

Unlike the other fluted the feed rollers, the bottom one closest the shearbar is smooth and has a scraper bar that needs removing and cleaning up with a flappy-disc on a grinder.

Inevitably where the forager has sat idle rust will have formed on the roller too so give that a quick buzz up as well.

Finally reposition the scraper and adjust so that it just touches the roller along its full length – this may mean pulling it back out and grinding it back in the shoulders to get a straight edge.

First remove the multi-vee belt on the back of the forager that powers the flywheel and clean out any accumulated dirt in grooves and this can build up and damage the belt.

Next grasp the top of the flywheel and rock it to check for play in the bearings and splined shaft that it runs on.

This is how knife-to-shearbar clearance is adjusted – the flywheel slides forwards and back on the shaft.

If there’s still slack in the set-up after the bearings have been changed then it might be that the splined shaft or boss at the centre of the flywheel has worn.

In the words of the legendary Haynes manual, refitting is the reversal of removal.

To get belt tension bang-on, wind the nut right up until you can slip a 10-pence coin between the coils of the spring.

A visual inspection of the 10 knives is usually enough to make the decision about replacement. If the forager has swallowed something it shouldn’t have, then they’re likely to be missing a few chunks.

This is fine as long as they can be ground out with the sharpening stone but if that means taking the hard-facing back to just a few millimetres then it’ll be impossible to keep a sharp edge on them and they need to be changed.

In theory they can be changed in opposite pairs but that will make trimming the flywheel-to-shearbar clearance a very difficult job.

If the circular sharpening stone is not wound fully back when out of work it can vibrate against the flywheel guards.

That wears ridges in the abrasive surface and potentially damages the bearings and bushes that it spins on.

It’s an expensive mistake to make as the new stone costs £610 and it’s another £60 for the bearings and bushes.

Bolted to the back of the flywheel, the position of the blower paddles is critical in ensuring the SH40 has enough puff to propel chopped grass into the trailer.

They’re mounted on two bolts in elongated holes so, if they have good clean edges, it’s just a case of slackening them off, sliding them forward, nipping them up and then spinning the flywheel to ensure they don’t jam up against the liners.

However they’ll usually benefit from being whipped off and having a buzz up on the grinder to square off their wearing edge.

The liners around the flywheel are a wearing part and it’s not uncommon to have to change at least one every season.

They come in three sections and the easiest way to judge how much life they have left in them is to look at the countersunk bolt heads that secure them.

Compare their size to a new one and that will tell you how much steel is left in the liner.

Getting them off will generally require a couple of blades and blower paddles to be removed to get access to the heads.

Sliding them out under the flywheel is tricky so it’s generally easiest to whip the right hand section out that side, the bottom piece out from the underside and the longest left-hand section out through the turret once the spout is folded over.

Removable hatches on the underside of the spout mean it’s easy to get a feel for how worn the chute liners and retaining bolts are.

If flywheel liners are to come out anyway then removing the ring of bolts around the turret and allowing the spout to fold is probably the easiest option.

A loader makes lowering it an effortless task but it’s also possible with a long length of 4×2 and a bit of muscle.

While everything through from the flywheel to the chute has replaceable liners, there’s one exception.

The critical point where the square-sectioned flywheel housing switches to circular turret is just single-skin steel and over time is particularly prone to wear.

This one has got paper-thin and eventually split in the corner that takes all the battering.

A replacement turret section will cost £540 but a few hours in the workshop with the grinder and welder will generally sort the job out as long as the patching-up accurately mirrors the shape of the existing steelwork and marries up with the liners.

With everything re-built and ready to go, it’s just a case of setting up the blade to shearbar clearance.

This is done by winding the flywheel forwards on its threaded boss until the blades make contact with the bar.

To start, lock the rear drive pulley latch and slacken off the flywheel locking bolt.

This will involve cranking the flywheel over with some gentle thumb pressure on the pulley latch until it drops into its corresponding notch on the main shaft.

With that done, wind the flywheel clockwise until the blades just knock on the shearbar then wind it back a touch so there’s just a gentle scraping sound.

Then release the drive pulley latch and spin the flywheel until the locking bolt lines up with the right notch in the shaft. Tighten it up and it’s good to go.

With the pick-up off, the back guards can be removed to expose the chain drives for inspection.

Just take up the slack on the adjusters – they rarely give trouble. Other than that it’s just a case of changing pick-up tines at £5.50 a pop.