Tractor sales in 2008 were the highest for 12 years, according to figures just issued by the Agricultural Engineers Association.

But that 1996 figure turned out to be a high point in farming profitability and was quickly followed by tougher times. Tractor sales dropped to 15,104 the following year and then tumbled to just 9468 in 1998.

Could that big drop happen again this year? AEA economist Chris Evans doubts it, though he does expect a fall back from the 2008 peak.

“There are still good levels of orders for early 2009, partly because tractor makers weren’t able to supply some machines in 2008,” he says. “As long as a fair proportion of them are delivered we will still be looking at a good overall figure at the end of the year.”

Other factors are also likely to slow any fall in sales, he believes. Cereal prices have slumped, but not – in relative terms – by as much as in 1996/97. Plus fuel prices have sunk back after their massive rise in mid-2008 and public interest in farming and food security is still strong.

The recession is a factor, too, he suspects. “Though farmers are affected by the credit crunch, farming should be better placed than many other industries to ride out a recession. In fact, with many sectors in turmoil, investment could well flow to safer industries such as agriculture.”

The AEA expects the 2008 figures to show a further rise in average tractor horsepower, as farmers try to boost workrates to keep unit costs down.

In 2007 the average tractor sold had 134hp under its bonnet. That figure is expected to have gone up to 138hp in 2008, though the detailed figures haven’t yet been collated.

Compare that with an average tractor power of 106hp in 1996 and you can see how we are all driving much bigger (and more sophisticated) tractors than a dozen years ago. 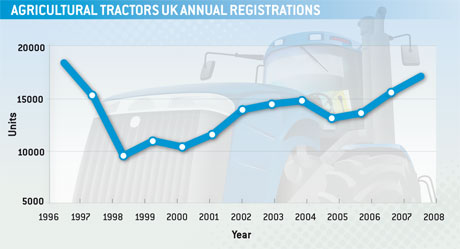