Challenger’s latest Terra-Gator, the 8333, will be the first to get Agco’s CVT transmission.

TechStar CVT has a range of driving modes, controlled by conventional foot pedal or a hand-operated Power Direction lever and has power management to match engine speed with engine revs, in common with tractors also in the Agco stable.

Built in Holland, the distinctive three-wheeled 8333 will be fitted with a 360hp Agco Sisu 8.4-litre Citius engine and adopts a one-piece chassis, which lowers the Terra-Gator’s centre of gravity and improves stability, says the company.

The cab gets pneumatic suspension as standard and is 15cm lower than previous models, also giving better visibility.

Also making a public debut on the stand was a pre-production model of Challenger’s latest self-propelled sprayer, the RoGator 600. Due to be introduced mid-2010, the three-model range will stretch from 170hp to 240hp and will feature side-mounted Sisu engines. 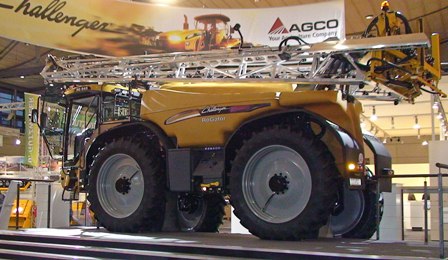 Fully independent suspension on each wheel and a new single-beam chassis design give high levels of stability, says Challenger. Hydraulic working height control and track-width adjustment, coupled with a new boom suspension and control system, give operators plenty to play with, too.

It will be available with tank sizes from 3500 litres to 6000 litres and is fitted with a fully hydrostatic transmission with power management.