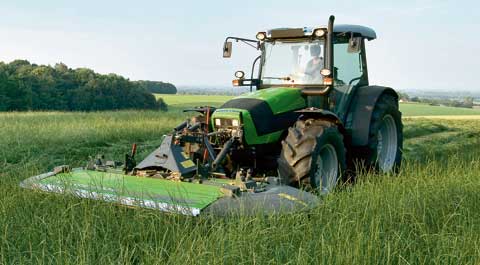 If you’re looking for a smaller CVT tractor, put this on your shortlist. Lots of driving modes, but most people will probably keep it in auto.

Deutz-Fahr has ramped-up its offering of CVT-equipped tractors with the launch of the Agrotron TTV 410, 420 and 430. The introduction of these three models takes the full Agrotron TTV line-up up to 224hp.

Powered by a Deutz 2012 common-rail engine with exhaust gas recirculation (EGR), the models have rated power of 115hp, 125hp and 135hp respectively, with max powers of 121hp, 130hp and 142hp. Electronic engine management keeps revs to a minimum once the desired rpm is reached.

In the field, we had the chance to test the usability of these cvt-equipped tractors for ploughing, trailer work, mowing and as a front loader.

The 50kph TTV transmission, manufactured by ZF, is an Ecomm 1.3 unit and is an adapted version of the Eccom 1.5 transmission used in the larger TTVs. It transmits nearly 100% of power mechanically, meaning there’s only a few occasions where it’s delivered hydraulically. Transport speeds of 50kph can be achieved at 1750rpm when the engine is in economy mode, or with a 40kph transmission at 1400rpm.

It’s also the first Agrotron to get the company’s eVISCO electronically controlled viscostatic fan, which keeps the engine and transmission cool regardless of the engine load, thereby saving fuel.

There are three driving modes; auto, pto and manual, all selected via a button under the flap on the armrest.

In automatic mode, the driver sets the target speed either through the foot throttle or the hand throttle and the engine speed is electronically regulated to at the optimum revs depending on the load.

However, it’s also possible for the operator to adjust the response behaviour, as Deutz-Fahr calls it, by adjusting a dial positioned under a flap on the armrest. If a more aggressive response is required, this dial can be turned anti-clockwise towards “power”, if less aggression is required it can be turned towards “eco”.

As soon as the pto is engaged, the transmission switches to pto mode automatically. This allows the engine revs to remain constant regardless of the speed. There are four pto speeds as standard – 540/540E; 1000/1000E and the automatic pto function is standard, meaning the pto switches off every time an implement is raised and engages when it’s lowered.

In Manual, the foot pedal goes back to setting the engine speed. However, Deutz-Fahr expects most users to operate the tractor in auto 99% of the time.

Another useful transmission feature is PowerZero, which holds the tractor regardless of the slope or load. When the driver wants to move again, it’s simply a case of putting a foot on the throttle.

Lift capacity of the new Agrotron range is 6200kg and hydraulic flow rate is 110-litres/hr. The S Class cab is inherited from the larger Agrotron models and has what seems like acres of glass both front and rear. The sloping bonnet allows the driver a clear view of both front wheels and this proves useful for loader work. A roof window is standard, too.

Deutz has also upgraded the braking system by adding a servo to reduce the effort needed to press the brake lever, as well as changing the spacing between the rear brake discs. Called PowerBrake, this set-up also allows the driver to make up to 10 braking movements even when the engine is switched off.