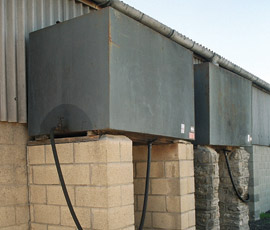 If you thought that the arrival of higher levels of biodiesel in farm diesel tanks on 1 January 2011 had passed without drama, think again. It turns out that, in most cases, the expected increase in biodiesel content in fuel never actually happened.

However, from April 2013, the percentage of biodiesel will rise from the current 4-7% level to 10%. That may sound like a small increase, but it could make a difference to farmers whose fuel stores are not up to scratch.

That’s the view of Duncan Lambert, director and general manager at Rix Petroleum in Hull. The company supplies red diesel to many farmers across the UK and keeps a close eye on the increasing levels of biodiesel that are being mixed in with mineral diesel.

One of the main changes to red diesel (technically known as sulphur-free gas oil) in January 2011 was the reduction in sulphur from a maximum level of 1,000 parts per million to just 10ppm. In fact, red diesel is now pretty much identical to the white version sold in petrol stations, except that it has a slightly lower cetane number (is a bit slower to ignite in an engine) and a red dye added.

This increased level of biodiesel in red diesel means farmers need to look again at their fuel store management, adds Mr Lambert. Biodiesel pulls in moisture from the air, which encourages water to build up in the tank, he points out. It also provides a source of nutrition for the bacteria already in the fuel and encourages them to multiply, which in can block engine filters.

Many farmers have replaced old, gravity-fed steel fuel tanks with plastic fuel stations in recent years. However, there are still plenty of metal tanks on farms that were installed in the 1950 and 1960s.

It is these tanks that may need attention if they are to continue supplying clean fuel.

Read how fuel changes affect you