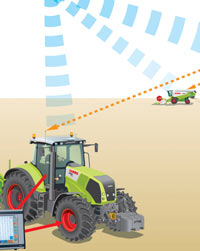 The prospect of a nationwide RTK (Real Time Kinematic) network that gives farmers sub-inch GPS autosteer accuracy has come a step closer with the announcement by Claas that its network will soon cover much of the UK’s arable heartlands.

According to Claas’s Edward Miller, the company has bought four RTK signal transmission licences and has already installed 11 masts, most of these on farmers’ grainstores or outdoor bins. These will give coverage as of now down the eastern side of the country from just north of the Humber down to mid-Essex.

Coverage will be extended down to Kent this Spring, he says, and then over the next two to three years, in to Hampshire and the Home Counties, as well as pushing up through North Yorkshire, Northumberland, the Scottish borders and Aberdeenshire.

Claas is not the only machinery company to be working on multi-mast RTK coverage. Deere and New Holland also have RTK masts but these tend to centre on individual dealers.

However, Britain is still lagging behind many other countries when it comes to offering a national RTK network. Germany, Denmark, Australia and the USA have well-established networks, partly because of their easier topography.

Each mast will cover an area 25-35 miles across and the fact that there are four frequencies means an individual farmer covered by two masts will be able to switch from one to another at the press of a button.

According to Mr Miller, the typical 25W power of its masts will provide a stronger signal and better repeatability than the typical 0.5W of a mobile RTK transmitter. It also means that anyone wanting to start using RTK doesn’t have to invest in their own fixed or mobile transmitters.

Claas’ own GPS kit will pick up the signal, he says, but so will Trimble and many other makes of equipment when fitted with the correct RTK radio. However it is not compatible with John Deere receivers.