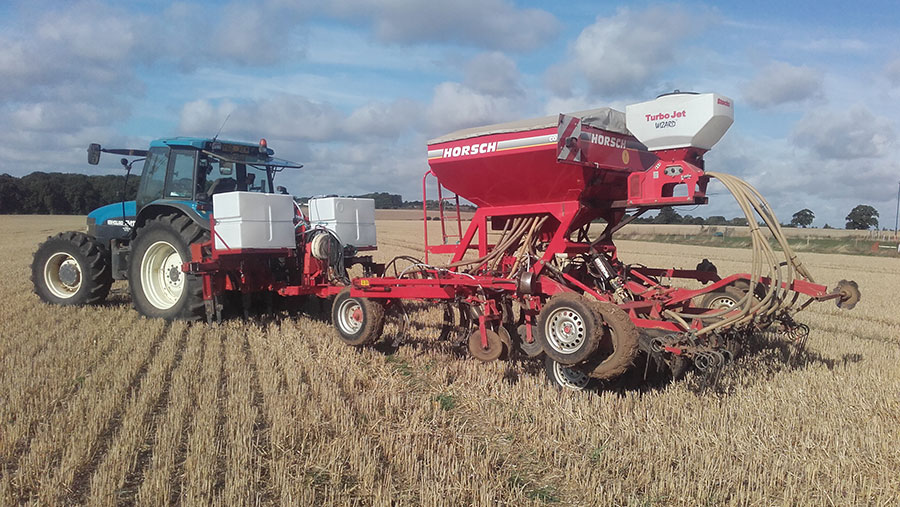 He returned to the home farm six years ago with an eye to shaking up the previous plough-based tillage system having spent a decade on a Cambridgeshire arable unit.

After poring through the off-the-shelf drilling options, it became obvious that a spanking-new machine would be difficult to justify across his 200ha block.

Not only would he need to throw the fat end of £25,000 at the drill, but more grunt would be required from his frontline tractors, too.

“At the time, most of the mainstream manufacturers were also promoting the use of a stubble rake prior to drilling, but we’ve got some heavy land that slumps badly and my time is probably better spent running through with deep working equipment to lift and drain some of the wettest patches,” says Mr Tarry.

To the drawing board

Central to the new system was to be a 10-year-old Horsch CO4 that arrived on the farm from Sharmans for £14,000.

It filled the boots of an old Sulky Suffolk-coulter set-up, which had struggled to perform on anything other than ploughed land.

With his frontline tractor topping out at 150hp, the semi-mounted CO4 was an easy-to-pull option and ripe for customisation.

He began formulating a plan that would make the most of his available tillage gear and horsepower without demanding any vast investments. 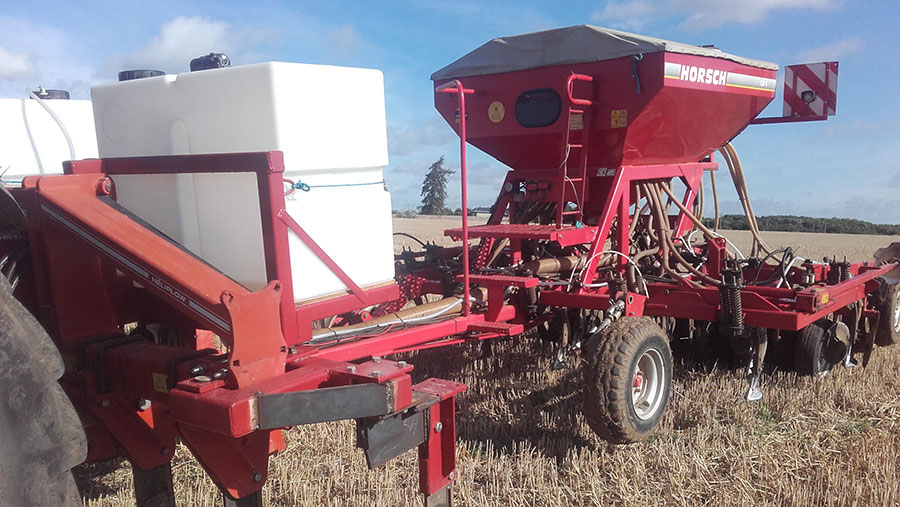 The next part of the puzzle arrived in the form of a 3m Gergoire Besson Heliplow subsoiler, which was bought new for £6,000.

“We’d dabbled with fitting a power harrow to the subsoiler’s floating rear linkage to beat down clods ahead of the old Sulky drill, but it was a slow process at a busy time of year and the subsoiler’s crank-legged tines usually left a rough surface ahead of the drill,” he says.

First up, Mr Tarry ditched the bent legs in favour of straight bodies fitted with a variation on the low-disturbance Cousins Micro-Wing tines, which he runs at 15cm deep to minimise soil heave and keep a tidier surface.

The plan was to mount the drill to the subsoiler’s linkage, but the toolbar needed wing extensions to match the Horsch’s 4m working width.

“It took a few rough calculations to work out how much space I had to work with, making sure I didn’t catch the drill’s front tyres on the headland turns,” he says.

“I ended up putting 50cm extensions on each side, so the legs are the outermost point of the subsoiler and pivot inwards ready for the 10-mile trip to the second block of land.”

Fert on the move

His second job was to build a starter fertiliser system to sit on the toolbar.

As well as providing the young crops with an early season boost, mounting the tanks close to the tractor’s back end and on the three-point linkage would add more weight for better traction in tough conditions.

As with the drill, he shopped around for liquid fertiliser kits, but second-hand, front-mounted systems were still coming in around the £5,000 mark. 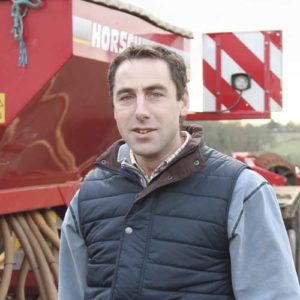 “The kits tend to be quite expensive as they use accurate, high-pressure hydraulic pumps, but I decided I could knock together a low-pressure system that would cost half as much.”

Two 350-litre Wydale tanks were mounted on either wing to try and avoid obstructing the view to the back, while the flow of liquid is tweaked by a simple pressure adjuster reached through the tractor’s rear window, just like you would on an old sprayer.

Once the pressure has been set to match the rig’s travel speed it can be left all day, although Mr Tarry does plan to invest in a flowmeter to keep a closer eye on how much fertiliser is being applied.

Another £900 went on plumbing, flow-control valves and a petrol transfer pump to fill the fertiliser tanks.

It also paid for the components needed to build a control box, which is able to sense the change in hydraulic pressure as the drill is lifted out of work and turn off the pump to save any wastage.

The challenge of using a low-pressure system for low rate applications is metering the fertiliser accurately.

Pipes from the tank feed each of the CO4’s 16 legs and Mr Tarry uses spray-nozzle-style flow metering discs to dish out the right amount of fertiliser.

“Given that it was dealing with far less product at a much slower speed, I decided to use one metering disc to service two coulters.

“That meant I split the flow to each coulter after the metering process.”

However, after a few seasons’ trials, he’s decided to fit a disc for each coulter and reckons they can cope with the miniscule quantities of fertiliser flowing through.

Mr Tarry also had to fabricate the fertiliser distributor that runs from the end of the pipe and down the coulter’s Achilles to the ground.

Canadian firm Dutch Openers quoted him £23-a-piece for a pencil-sized metal pipe with a pinprick hole at the bottom to drop fertiliser into the seed-bed.

“I couldn’t justify that sort of money, so I found some stainless steel tube, welded it to a piece of flat bar and connected it to the leg via a couple of bolts.”

“Surprisingly, it doesn’t need high pressure to blast any dust away from the outlet and, so far, I haven’t had a single block-up.”

The drill also required a few tweaks to make sure it was tailored to the new system.

“I’d spotted some American-style points on a Sumo DTS drill from Dutch Openers that I thought might stir up less soil than the standard Horsch feet,” he says.

“The upshot was that the new coulters would work in conditions that Horsch feet wouldn’t, which has saved me making an extra soil-loosening pass across each field just to make sure the drill’s coulters will get into the ground.

“Three seasons later and the drill is still running on the original points, so it looks like it was a pretty good investment.”

Adding a Stocks Turbo Jet at the back to apply Avadex or slug pellets completes the transformation into a bona fide one-pass rape drill, though a pretty steady 5kph travel speed means he can only drill about 12ha in the average day.

However, the other advantage of Mr Tarry’s system is he can split the toolbar from the drill.

“For wheat crops, I run through with the subsoiler after harvest, sometimes with the rolls attached behind.

“This helps get a decent weed chit to be sprayed off prior to drilling. I then drill in early November to give myself as long as possible to hit the blackgrass.“ 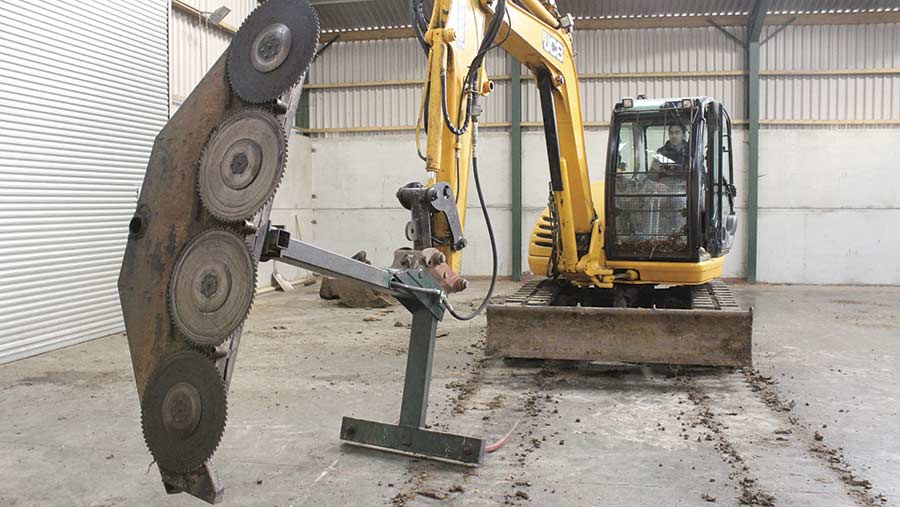 Another of Cambridgeshire farmer James Tarry’s recent inventions is a coppicing system to mount to a 360 excavator.

After sourcing a four-disc Spearhead Quadsaw from local dealer Sharmans, Mr Tarry went shopping for a digger meaty enough to carry the rig and power the discs.

He traded in a heavy-duty 15t Hitachi 360 for a JCB 8080 that could provide adequate oil flow without the pure bulk and metal tracks.

He then set about building a two-in-one headstock and frame that could carry the saw and two curved Kverneland tines to pull the chopped wood and brash out of the way ready for burning.

The saw will munch through trunks up to 6in thick and weighs just 220kg – well off the 900kg weight the digger is rated to – and has enough reach to keep the falling branches well clear of the JCB’s cab.