Since its heyday in the 1980s, the light and nimble low-ground pressure sprayer has been gradually phased out In favour of bigger, higher-capacity alternatives.

But for many operators across the country, the importance of skipping daintily across soggy soils is still more important than covering vast acreages to a fill.

For those in the market for one of these machines, there’s sadly not a lot of choice.

A few hydrostatic makers build a lighter-weight machine, but for those that want a traditional mechanical drive there are only three that fit the bill: Kelland’s Agribuggy, Bargam’s Grimpeur and Alanco’s Sprayranger. And we’ve recently been informed the latter has stopped taking orders for new machines. 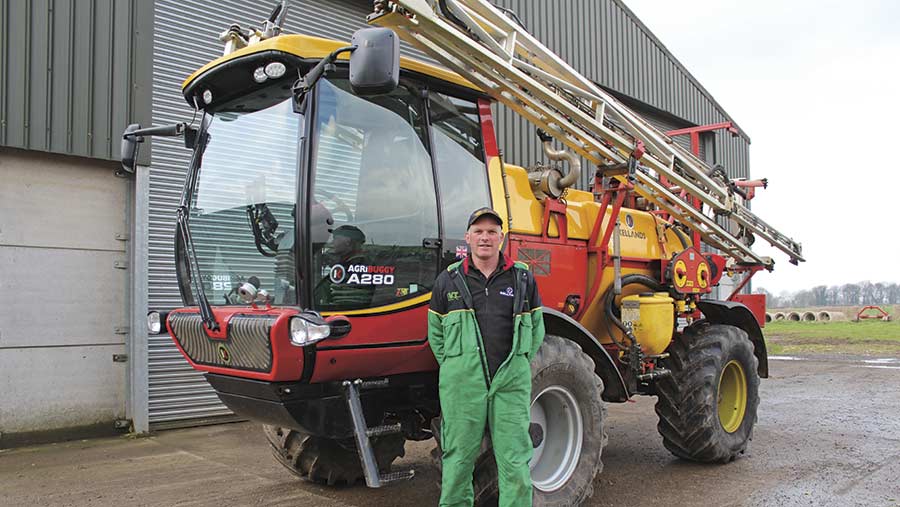 Each of these can carry at least 2,500 litres of chemical and sit well under the 10t mark when fully laden.

That’s quite a difference when compared with some of the largest self-propelled machines on the market that nudge the 13t mark without a drop of liquid on board.

To find out how each of these mechanical-drive machines has been fairing on farm we catch up with three operators that have been running their machines for two years. For the first in this series we take a look at Kellands Agribuggy.

With a long line of machines from the Kellands/Frazier stable, Derbyshire contractor Rob Hopkinson is now running one of the maker’s most recent A280 machines.

He has scaled back his work in recent years, focusing on a core customer base with around 2,200 acres of spraying to cover.

Why did you buy a low-ground pressure sprayer?

Back in 1990, I started contracting with a Kawasaki 400 quad bike and a trailed Allman 12m 625 sprayer, before quickly moving on to an early Frazier Agribuggy.

I’ve stuck with low-ground pressure sprayers ever since because there’s plenty of demand for it in the area and I’ve got a solid customer base who like the smaller machines.

Mechanical drive is also better in tough conditions because you’ve got a diff lock and you don’t have to worry about them running out of steam on the banks.

What made you pick a Kellands A280?

I have had Kellands and Frazier sprayers all my contracting life. My first self-propelled was a 12m 3D, which I upgraded to Gambetti booms for extra versatility – I could spray at 12m, 18m, 20m and 21m.

This had the Ford Escort engine, which really struggled on the hills, although the tractor unit is still going strong on a neighbouring farm to this day.

Of the lot, the Frazier Stealth was the best sprayer I owned. It had a Land Rover 300 TDI engine and an auto box, which none of its competitors offered.

When I came to replace my previous Agribuggy 2700, I looked at the Alanco but it didn’t have enough technology on it for me and I preferred the Agribuggy styling.

On top of that, I’ve got an Agribuggy dealer close by and have a very good relationship with the guys there – this has a large bearing on my buying decisions, because good back-up is essential.

There’s only really one spec with the current Agribuggy, which means it has a 2,700-litre tank and 24m aluminium boom. It’s got five steering modes and a headland management system that switches from two- to four-wheel steer as the centre spraying section switches off at the end of the row.

The drilling tractor on the farm where I do most of my work has auto-steer guidance and puts in tramlines, so I couldn’t justify the extra expense for auto-steer on the sprayer.

I have got Teejet auto-section control running on the Egnos signal, though. This has made a huge improvement to accuracy because flicking seven sections can become tiresome.

Kellands has also added a bracket to attach a Stocks slug pelleter to the rear of the booms. It can spread to 24m and you can adjust the rate on a separate box in the cab running off the signal from the Teejet box.

It has the standard leaf and coil springs attached to Melo axles, which still provide a comfortable ride. There is a reversing camera as well for extra visibility.

I have owned the sprayer since September 2015 and have covered 700 hours on a mix of arable and grassland. I can’t fault it.

It’s got plenty of torque compared with the 2700 I had before, which is crucial for the mix of terrain around here.

Kellands also seems to have addressed some of the problems we had with the 2700. That machine had a small compressor on the pump for nozzle shut-off that gave up the ghost.

The version on the A280 is much bigger and is driven straight off the engine. It hasn’t given us any problems and is now more than capable of altering tyre pressures during a fill up, which on average takes around 12 minutes with the 274-litre/min pump.

We have three sets of wheels for the sprayer and it’s so easy to change them over. Two of us can do a full set in about half an hour – with the larger sprayers it can be half a day.

In the early day’s Agribuggies were problematic machines. We had head gaskets go and the FPW axles gave us some serious headaches. I remember being up most of the night to fix them before the next day’s work.

Thankfully, we haven’t had anything go wrong with this one yet, but it’s only done 700 hours so far.

The biggest improvement compared with the 2700 has been the joystick controller.

All on-screen adjustments are now controlled via the joystick, from selecting steering modes to controlling the master spray switch.

The cab has been improved significantly too, with small features such as a sunblind on the front window and a buddy seat. 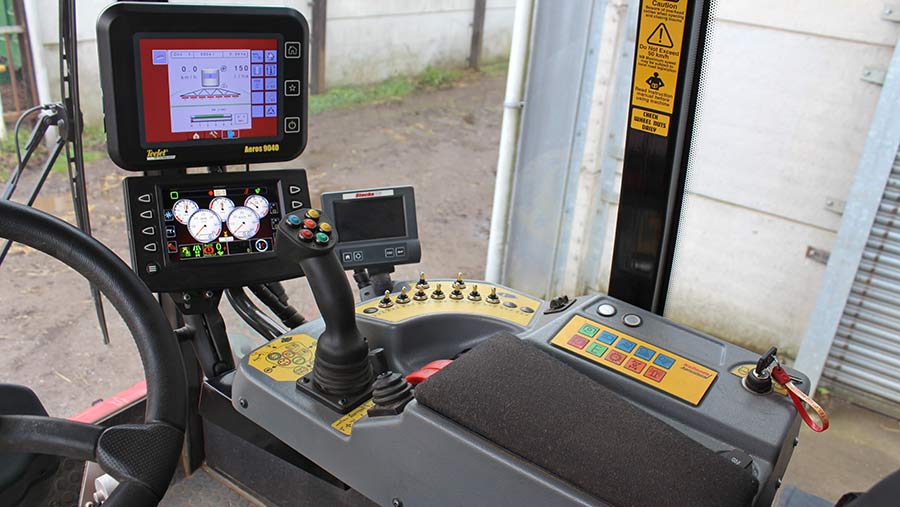 There’s also a switch under the seat to alter the fill-up speed, so you don’t have to enter the cab with your spray gear on.

Having a GPS speed sensor has also improved the accuracy of the rate controller.

On previous models I used to find that wheel slip would play havoc with the rate controller and you’d end up with not enough or too much chemical. Now it’s just about perfect.

The tank-measuring system also removes the need for a Pony flow meter, which I had on my older machines. It’s a very accurate system for identifying what is left in the tank when in the field.

The only downside with the A280 is the ground clearance, but that’s to be expected with a machine sitting on axles.

It would be nice to be higher though, especially when desiccating oil seed rape.

I would love to have auto boom levelling, but Kellands aren’t specifying this on the options list because they don’t fully believe in a system yet. Once they do, it’s an upgrade I will take.

When I bought my Agribuggy I felt there could have been a few extra options; they are generously equipped for the price, including electric mirrors and climate control.

Since I purchased my machine Kellands have updated the options list, which is now very well stocked with toys.

In a heartbeat. In my opinion they are the best lightweight sprayer on the market and the back-up from Kellands is second to none. I enjoy the ride and the mechanical drive, and with the improved cab it’s a nice place to be.

Mr Hopkinson isn’t afraid of a welder and has fabricated his own 12,000-litre water bowser from an old lorry fuel tanker.

The green-and-yellow-liveried bowser is equipped with a bunded chemical storage area, a fast-fill pump and a huge John Deere logo emblazoned on the rear to match the existing tractor fleet.

Towed by his own John Deere 6430, it has allowed Mr Hopkinson to cut down travelling time between jobs and he can spray 400 acres per day when using it. 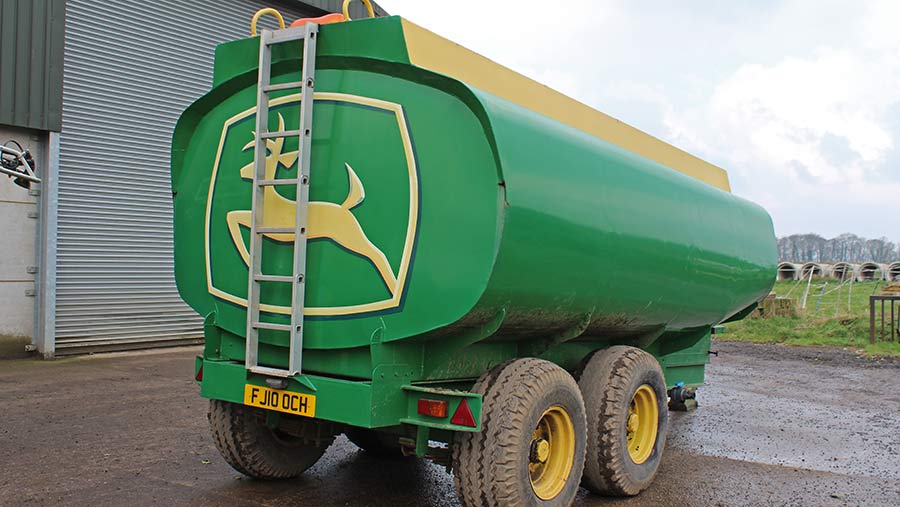