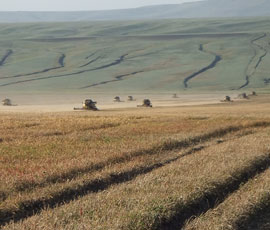 Production of agricultural machinery across the world is expected to increase by 6% to €96bn  in 2013. That’s according to the VDMA Agricultural Machinery Association, which represents German farm machinery makers.

“With a market share of more than 30%, the European Union continues to play a leading role,” says VDMA managing director Dr Bernd Scherer.

Turnovers of European machinery makers are expected to be stable this year, despite the fact that overall demand in the EU is slightly below last year’s levels.

Most companies are said to be optimistic, with a third of bosses anticipating a growth in turnover for the industry, 40% expecting level sales and 25% foreseeing a decline in turnover in the coming six months.

While European makers are decidedly cautious, higher growth is expected in India, Brazil, China, USA and – for the first time in years – Japan.

In many countries this growth in farm machinery sales is largely driven by state investment subsidies. Governments in Brazil, India and Japan, in particular, have strengthened the incentives they offer to farmers to buy new machinery and tractors.

However these subsidies are often only available for machinery made in that country.

That is worrying, says the VDMA, as are the increasingly restrictive import policies that some countries are imposing.

In fact, restrictions on imported combine harvesters coming into the customs union of Russia, Belarus and Kazakhstan are expected to mean there won’t be enough threshing capacity for this year’s harvest.

All in all, selling agricultural machinery into eastern Europe is proving tough at the moment, says the VDMA.