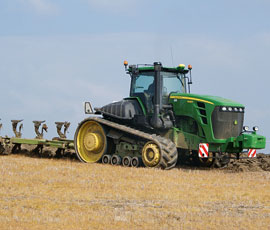 British farmers may be getting more security conscious, but a continuing steady flow of thefts of high-value kit from farms suggests the thieves may not be about to give up.

One of the key weapons in the farmers’ armoury is the CESAR/Datatag registration and security tagging system, which involves giving tractors and other machines a visible tag as well as covert identification tags. These can be read by a special scanner used by police forces even if the thief has removed all other forms of ID.

According to Datatag, 15,000 items of construction and farm equipment were tagged in 2010 and that figure is expected to rise to 25,000 in 2011. Tractor manufacturers such as John Deere, McCormick, Landini and Valtra now fit the system as standard on new tractors and other big makers are expected to follow suit.

Though 80% of these tagging systems are fitted at the point of sale, there’s also a growing demand from farmers wanting to get their existing tractors tagged.

Another important deterrent is the rising number of immobilisers and GPS trackers that farmers and contractors are fitting to their machines. Many of these attract worthwhile insurance discounts (as do the tagging systems) and the NFU Mutual alone says that 4100 CESAR/Datatag systems were registered with it between January and August 2010, as well as 2040 immobilisers.

The number of thefts has remained broadly steady compared to this time last year, but recovery rates are now higher according to NFU Mutual’s Bob Henderson.

“Before CESAR started, recovery rates were 5%, this has now increased to more than 20% in some areas.”

“As soon as a machine is reported stolen, a bulletin and photograph is sent out to all ports, police forces and to our partners abroad.”

The trend is showing a 20% increase in the value of machinery stolen, however. “Although we’re recovering more, the size and cost of the machines stolen is getting higher.”

Recoveries are not restricted to one particular area, he adds. “Eight tractors are currently on their way back from Poland, and recoveries have been made from northern Cyprus, southern Ireland and closer to home, too.”