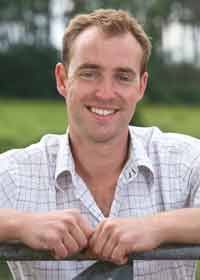 After only a few minutes talking to Andrew Rees, it’s apparent why he was awarded the best student award when he attended the local agricultural college, Brooksby Melton in Leicestershire, after leaving school.

Thirty-one-year-old Andrew is driven by a determination to succeed in everything he does. Yet he does so in a quiet, intelligent and modest way. His ambition – to build a profitable but sustainable farming business – has been realised on this mixed 150ha tenanted farm.

In the 16 years that Andrew has been a full partner, with his father Ken, he has modernised the business, sought a new milk buyer and invested (using his own money) in infrastructure that will keep this dairy herd in place for many years to come.

He has made the best use of his land to fit the farm’s capability to grow grass, wheat and maize for feed to the right number of milking cows, low input heifer rearing and sheep.

The dairy cows are Holstein Friesians, with some of the more “extreme” cows crossed with a few Swedish Reds: “I only buy in bulls and the last one was a Simmental from my neighbour, because I knew where it came from,” says Andrew.

When the dairy he was supplying wanted him to move to a cheese contract, he approached Arla. “I felt liquid milk would better suit my system and asked my neighbour, who has a bigger dairy herd, to join me in discussions. It was the best thing I did. We went to Arla and soon after Tesco approached me to join its local choice group which guarantees me a milk price over my production costs.”

He has since invested in the farm including building 25,000sq ft of sheds and a new £80,000 12:24 parlour out of the farm’s profits. In addition, he introduced a Heatime detection system, which has reduced involuntarily culls and helped to tighten the calving interval considerably.

He is a big user of straw. “I believe housing cows in winter on straw makes a huge contribution to their health and happiness. A Bristol University study conducted here for the past three years shows that our lameness levels are among the lowest recorded.”

Walking through the farm, you get a clear picture of how much Andrew enjoys the farm and the animals in his care. He also finds time to be on the NFU‘s next generation dairy board as well as chair the NFU Market Harborough branch. His enthusiasm for the industry is infectious and it’s hard to imagine a better role model for young farmers.

• Created a profitable, and sustainable, business

• Shares his knowledge with others

• Engages with the general public

Andrew’s enthusiasm for what he does is truly outstanding. He has made a mixed farm profitable through innovation and investment

Young farmers are the future of our industry. Massey Ferguson is proud to be associated with the recognition of this year’s entries, who have demonstrated enthusiasm in delivering their achievements.

Antony’s drive to understand where the best margins lay though detailed data analysis is impressive. His ability to share this knowledge with others makes him a great ambassador for farming

George has achieved a lot in the past nine years, modernising this arable business and moving it onto a viable footing. He’s producing great crops, an expanding contracting business and a beautiful farm for wildlife