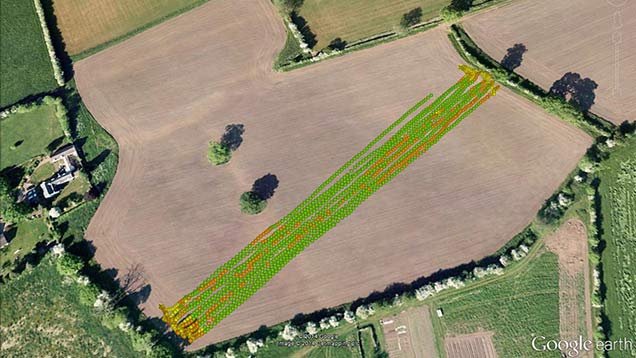 It might not be quite as expensive or far-flung as plopping a spacecraft on top of a comet travelling at 84,000mph, but getting real-world figures on the amount of carbon monoxide, nitrous oxide and methane coming out of a tractor exhaust pipe is surprisingly difficult.

No problem if you’re testing cars, of course. Put two vehicles on the same road at the same speed and you can easily work out which is chucking out the most carbon monoxide.

Try to do the same thing with, say, two tractors and cultivators in the same field, however, and you run up against all sorts of knotty problems. How do you know if both ploughs are working at exactly the same depth, for example? Are the soils precisely the same in all parts of the field? Can you be sure that one tractor isn’t slipping more than the other?

The answer to those questions in the past was to strap the tractors on a test bed, run them at the same revs, and see who uses the most fuel. But that wholly lab-based system really doesn’t tell you much about relative fuel consumption on a greasy topsoil in Upper Wood Field.

It was these (and many other) problems in comparing carbon monoxide/dioxide that prompted Harper Adams University and machinery giant Claas to get together to find a way to accurately compare fuel consumption from one tractor to another.

The people given the task of overseeing the project were Driffield farmer’s son Rob Fillingham (who had already spent a year at Claas testing combines and had moved on to studying greenhouse gases and how they can be reduced as part of his PhD) and MEng ag engineering graduate Miles Metcalfe.

They approached UK company Emission Analytics, whose founder and CEO Nick Molden has been studying fuel consumption and greenhouse gas output over the past three years. He now offers a real-world set of car fuel consumption figures in What Car? magazine as an alternative to the somewhat flaky ones printed on new car brochures.

The result was a project to run two Claas tractors (a Deere-engined 184hp Arion and a 235hp FPT-engined Axion 830) with a full set of emissions-sniffing kit on board.

“We trialled the tractors in three conditions,” says Mr Fillingham. “Using a dynamometer to add a variable load to the pto shaft, road-testing at high speed with a fully laden trailer and in the field with a subsoiler and power harrow.”

Carbon dioxide, carbon monoxide, nitrogen oxide, total hydrocarbons and fuel consumption were measured on the go with the EA kit. With GPS position, engine load, pto speed and forward speed all constantly monitored, it meant that, for the first time, ag machinery could be monitored in the same way as cars.

And the results showed stark differences even when small changes in depth were made.

What difference will that make to tractor design in the future? Not much right now, concede Mr Fillingham and Mr Metcalfe, but their research should help cut tractor fuel consumption as well as reduce greenhouse gas emissions in the years to come.