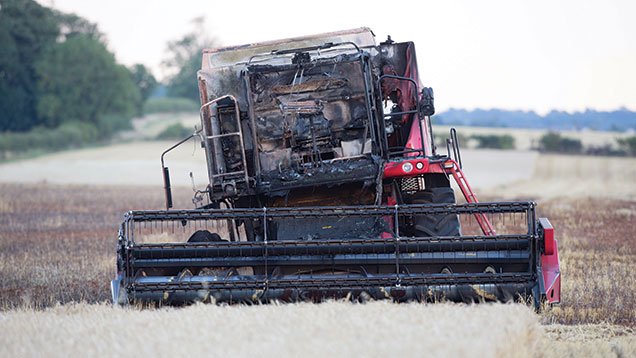 Combine fires are far from a new phenomenon. From the earliest petrol-powered Masseys to the latest tracked Claas Lexions, they are all capable of succumbing to the destructive forces of fire.

However, the problem appears to be getting worse. Every year we see more and more dramatic pictures of combines engulfed in raging fireballs.

And it’s not the ageing, grubby combines with perished oil pipes and choked radiators that seem to be to blame. Most of the headline-grabbers are the biggest and newest machines with price tags that rival those of a sizable Cotswold cottage.

Why are we seeing more combine fires than we used to?

The number of combine fires actually varies considerably from year to year. The worst in recent years was 2013, when we had 73 fire claims, many of which were due to the tinder-dry conditions that harvest.

See also: Mobile calls fail as grower is caught up in combine fireball

So far this year we have received 50 claims, but that could continue to rise. (See “Combine fires in numbers”).

One of the reasons why they are appearing to be more common is that people are sharing the pictures more on social media.

Why is it that modern combines that seem to be catching fire?

The bigger, newer combines are working longer days and covering vast acreages, which puts them at a higher risk than an older machine that’s doing less work.

The changes to emissions legislation are another factor. To meet current targets engines have to run hotter, have larger exhaust systems and when dry chaff and dust comes into contact with them there’s a higher risk of fire.

Mechanical failures are less common on new machines these days, but when they do happen – particularly on a larger combine – they are often more dramatic. That’s because they have high-pressure fuel systems, gallons of hydraulic oil on board and plastic fuel tanks. When these melt the fire really gets going.

What is the most common cause of fire?

Dust and chaff build-up is a common cause. That is partly due to the extra heat generated by modern engines and partly because people are not blowing the combine down as often as they should. Because these combines process so much crop, dust and debris can build up very quickly.

Bearing failures, electrical problems, burst fuel and hydraulic pipes are other causes, but they tend to be more common on machines that are a few years old.

What can farmers do to reduce fire risk?

Regularly blowing off the combine is an obvious place to start, particularly in dusty, dry conditions. Tending to any oil or fuel leaks and replacing worn bearings is another simple way to reduce risk.

It’s important to have a good set of fire extinguishers on board and it might be worth looking at fitting an automatic fire suppression system.

Could combine manufacturers be doing more?

NFU Mutual is currently reviewing how the risk of fires can be reduced and what can be done to stop a fire spreading if something does go wrong.

We’re hoping to discuss with manufacturers the possibility of fitting fire suppression systems on new machines.

These would help reduce the risk of fires spreading as well as the chances of a driver or machine coming to harm.

Eventually we could get to the point where machines fitted with one of these systems attract a reduced insurance premium.

NFU Mutual insures roughly three-quarters of the UK’s farmers. These are its recorded figures for combine fires over the past three years:

I was driving up the field when I got a call from the corn carters to say they could see flames coming from the bottom of the engine bay.

I tried to drive away from the crop, but bits of burning combine were dropping off as I went. We lost 15 acres of standing crop as well as the combine.

The insurance company sent out a forensic investigator and he found that one of the main drive bearings off the engine had collapsed. It was supposed to be a sealed-for-life bearing so had no grease nipple on it.

With so much power going through this as it was breaking up it must have got incredibly hot and is the most likely cause. There was no dust on it either as I’d just cleaned it down. I always try to keep the combine clean using a combination of the built-in compressor and a leaf blower for shifting the bulky material.

We also nearly lost the New Holland hire combine that we had to replace ours. This time I got another call from the corn carters to say they could see white smoke. It turned out the fuel pipes had ruptured and were spraying a fine mist of diesel.

There was another incident with the wobble box on the header drive, too. This had got packed with straw and got so hot that I could smell it smouldering from the cab. When we pulled the straw out it set on fire.

It was a 2013 model that was just starting its third season.

I don’t think there was anything we could have done to prevent it starting, but if we’d had some better extinguishers, we might have been able to get the fire under control.

Our combine was fitted with two powder extinguishers, which were next to useless – it just blew away in the wind. When the replacement combine arrives I think I’ll fit three foam extinguishers.

We had just washed the combine off and fuelled it up after finishing cutting the barley and were working our way round the headlands of a field of Crusoe milling wheat.

On the second time round I noticed a hydraulic warning light come on and when I looked in the mirror I could see flames licking around the engine bay.

I tried to drive away from the crop, but only got about 15ft before the hydrostatic drive failed. The engine then cut out pretty soon afterwards.

The fire was too strong for the extinguishers to have any effect, but they were useful for stopping the fire spreading into the crop.

The fire brigade was with us in about 10 minutes and it took six engines to put it out.

This is the first time we have had a major combine fire and there was no warning. In the past we have had combines get hot and you usually get a whiff in the cabin before it gets too serious.

I’m guessing there was some sort of rupture in the hydraulic system that caused hot oil to spray on to the engine. But because the combine was so badly burned it is hard to pinpoint it exactly. The fire got so hot that it bent the axle.

It was a 2008 model and we’d had very little go wrong with it up until that point. There certainly had not been any problems with the hydraulics.

The combine had just been washed off and was regularly serviced, so there was nothing more we could have done. However, my phone battery was flat and I later realised that one of the tractor drivers had spotted some flames and had been trying to contact me.

This was about the same time as I spotted the flames, so I doubt it would have made a difference, but it’s one to remember for next time.