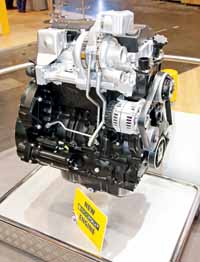 JCB’s new Ecomax engine has managed to achieve Tier 4 Interim (Stage 3B) emissions targets without the need for after-treatment of exhaust gasses.

The 4.4-litre powerplant has an improved combustion system which reduces pollutants during the first burn meaning gases don’t have to be dealt with later. A variable geometry turbocharger has also been fitted and exhaust gases are cooled and recirculated to be cleaned before release.

The unit is a similar size to the current engine so bays will not need to be altered significantly.

JCB is also launching a new skid-steer range for 2011 with 11 wheeled and eight tracked models as well as a smaller version version of their pivot-steer loader range called the TM170.

The Groundhog ATV has been re-branded as the Workmax and a smaller 800D model has been added. The compact buggy has a 20hp diesel engine and 400kg deck capacity.