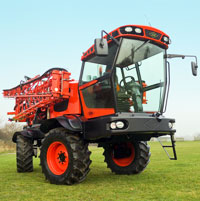 As the name suggests, Norfolk sprayer maker Sands reckons its new Vision sprayer has one of highest levels of visibility of any on the market. The cab is slightly curved, it says, and the interior is plusher, with a higher-spec CD radio with iPod and MP3 player compatibility.

An all-new control panel (pittured, below) sees controls grouped by function in five individual banks, with the most commonly used ones falling closest to hand. There’s also a multi-function joystick close to the operator which controls forward and rear travel, boom section controls and the main spray on-off control.

At the front of the control panel is the spray controller. On standard-spec versions this is the RDS Delta 4 unit, but those using GPS, auto shut-off or auto boom levelling can opt for systems from other manufacturers. 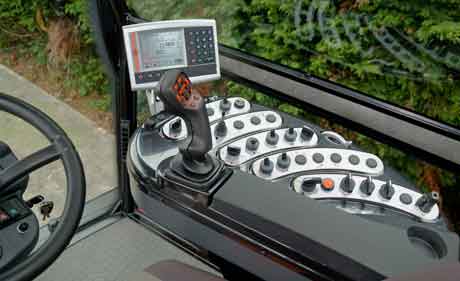 The fibreglass roof is hinged to give access to the air-con unit and has a mounting spot for GPS antennas. At the back of the cab, there’s also a sealed opening that allows extra looms for demount spreaders and variable rate systems to be fitted.

Sands has also improved the hydraulics by fitting a new valve block and reducing the number of hoses and fittings. Its Prime and Purge boom recirculation system has been improved by adding some clever low-volume plumbing, too. So higher pressures can be used to prime the boom before spraying and when rinsing after work.

There’s also a two-stage lift ram which gives a maximum nozzle height 2.5m above the ground. However minimum height is still 0.65m above ground for early soil-based spraying.