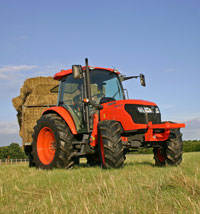 John Deere increased its share of the UK tractor market to more than 29% in 2007, maintaining its position at the top of the market for close to 10 years.

Deere’s nearest competitors in the 2007 market were New Holland and Massey Ferguson,coming in second and third with just 0.2% between them, selling 2809 and 2766 units, respectively.

In what was a strong year for tractor sales, almost all manufacturers saw an overall increase in the number of units sold, with the number of tractors registered in 2007 totalling 17,089.

Both Case IH and Claas shuffled up the rankings to third and fourth, respectively, with Claas (formerly Renault) strengthening its position for the second year running, selling almost 200 more tractors than last year.

McCormick came in fifth, while Same Deutz-Fahr, which owns the Same, Lamborghini, Deutz-Fahr and Hurliman brands, increased market share to nearly 4.5%, just a year after entering the league.

Kubota, which is strong in the compact tractor market and again entered the AEA league in 2007, grew its market share, maintaining a strong eighth position.

Premium-priced Fendt again came in 10th, while there was a bit of a reshuffle in 11th and 12th, with JCB regaining its position from Landini, selling 237 units.

The figures, which are recorded by the Agricultural Engineers Association, are tractor units registered for road use under the Department for Transport as agricultural tractors. Although almost all tractors sold for farming are registered, some smaller tractors under 50hp which are sold in other markets may not be registered.