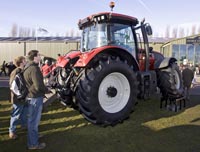 Valtra’s newest range of 270-370hp S Series tractors could be available for demos as early as harvest 2009, says the company. All but the smallest S232 model has the option of the same SCR technology as sister-company, Massey, and all five use stepless AVT transmission developed alongside Fendt.

Also seen for the first time in the UK are two new models in the N and T series, recognisable by their new engine covers and rear mudguards.

The Versu features a multi-step five-speed powershift transmission, whilst the Direct has stepless transmission controlled by a lever on the armrest. Dealers are expected to have the Versu available from May-time and the Direct in August, however full production for the former starts in August and for the latter in October.