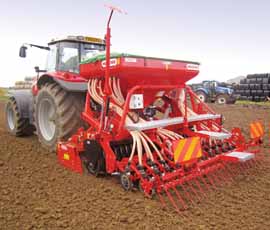 Opico says it intends to showcase the entire Maschio product range at LAMMA along with the launch of a new drill and power harrow range. It will be recalled that as from 1 November 2011 Opico took on the marketing of Maschio following its departure from Reco.

New products to be seen at the event include the Toro heavy duty, folding hydraulic power harrow which is available in 5m and 6m working widths. Their drivelines have been designed to cope with up to 380hp at the pto.

The new product line up continues with the launch of the Aliante Plus pneumatic drill and Dama box drill, both of which are aimed at the small-scale mixed enterprise farmer. 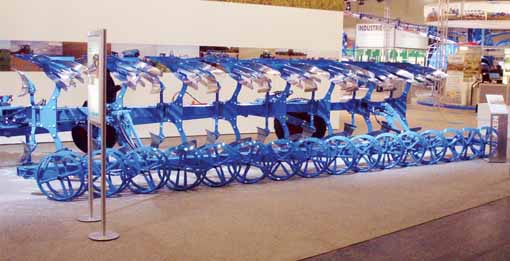 Lemken plans to launch the new Diamant 11 and 12 semi-mounted ploughs at LAMMA – ploughs which were first exhibited at Agritechnica last November.

Using the same 160mm beam used in the Diamant 10 version, new features include use of high carbon steel DuraMaxx slats and mouldboards which have no drill or punch holes in them which would reduce their wear resistance. Instead, they are hooked onto the rest of the plough.

The Diamant 11 is available with a maximum of nine furrows and the 12 model can have up to 10 furrows. Fitted as standard is the Hydromatic auto-reset system which can have its trip pressure setting adjusted from the cab.

Both models can be specified with a traction increase unit, the Diamant 12 has a new version which includes headland management which automatically regulates the pressure in the hydraulic system to ensure the tractor remains stable at all times.

A company making its debut appearance at LAMMA, Derwent International is exhibiting the Block Stem security system it is importing from a company in Italy.

A low-cost system, the Block Stem comprises two sections which are clamped on to a tractor’s steering ram and locked into place when the wheels are at full lock. With the inability to straighten the wheels, the tractor can only be driven in circles.

The company reports that Block Stem is already established in Europe where it qualifies for a reduction in insurance premiums. 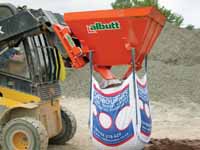 Need a simple system to fill big bags with grain, sand, sawdust or feed? Albutt may have the answer. Revealed for the first time at LAMMA is the company’s Bag Filler, which is a bucket attachment for use with tractor or telescopic loaders.

Material scooped into the bucket is held over a bag which is attached to it and the contents are released by opening a hydraulically operated trap door so they pour into the bag without any spillage. When full, the bags detach themselves from their securing hooks without the operator leaving the cab. Albutt says up to 40 bags an hour can be filled.

JF Stoll’s new 60 Series trailed forage harvesters feature a new chopping cylinder which, by making it heavier than before, is claimed to create an improved flywheel effect and an increased output of up to 25% as a result.

Greater control of exiting grass is achieved by using hydraulic folding chutes – optional on the FC 1060 and standard on the FCT 1360.

The manufacturer has also introduced new electro-hydraulic controls for all chute, reverse and pick-up adjustments and also pick-up hitches when fitted. A roller crop press to even out the crop and provide a better feed to the intake rollers automatically lifts clear when the reverse is employed to clear blockages. 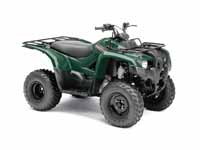 Yamaha will be using LAMMA to introduce its new Grizzly 300 ATV which, says the company, has been designed as much for leisure as it is for commercial operations.

A two-wheel drive machine, the Grizzly 300 replaces both the 350 2WD and the Big Bear 250 models and is powered by a 287cc liquid cooled, four-stroke single pot engine.

In the transmission department it’s a matter of opening the throttle and going – there is no clutch in this automatic box. A centrifugal clutch takes up the drive as engine speed increases and powers though a V-belt primary drive. There are high and low ratios available.

Equipped with front and rear carriers capable of transporting 65kg, the Grizzly 300’s towing ability is put at 227kg.

The UK launch of Simba Great Plains V-300 range of drills takes place at LAMMA. Designed for conditions in Northern Europe, the new 3m mechanical drill is said to be suitable for operation with 100hp tractors and can be worked in either min-till or as a direct drill.

The V-300 has a 3,100 litre seed-only hopper and the V-300F has a split hopper for seed and fertiliser. Both can be equipped with a small seed attachment.

Using Great Plains Turbo Coulters, row spacing is 15.8cm and coulter pressure can be up to 250kg. Each of the 19 coulters cultivate a 5cm strip of soil into which the seed is placed


LAMMA preview: Best of the industry on offer