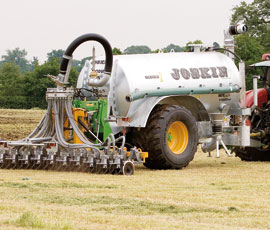 With just eight months to go before the NVZ regulations governing the storage and application of slurry and livestock waste come into force, it’s no surprise that compliance with the new rules is a key focus at the Manure and Nutrient Management Centre.

Peter Dampney, principal scientist at ADAS Boxworth, is expecting a busy time at the event, as almost half of farms in NVZ areas still cannot store all slurry produced by cattle from October 1 to March 1, as required under the new regulations.

“There is still a lot of work to be done, and time is running out,” he says. “Farmers visiting Grassland & Muck who would like help with assessment and recommendations on their own farm can come and talk through any aspect of the regulations with members of our NVZ solutions group.”

A timely introduction of the new version of PLANET nutrient management software, which for the first time includes grassland recommendations, will also help farmers comply with the new regulations, says Mr Dampney.

“The main attraction of this computerised version of the RB209 Fertiliser Manual is that it is an approved means for demonstrating record-keeping compliance with NVZ regulations. And it also helps ensure that farmers use expensive fertilisers more effectively.”

Latest results on LINK-funded work on woodchip pads will also be presented. “We are hoping to have farmer guidelines available, explaining the key dos and don’ts,” says Dr Ken Smith, principal research scientist at ADAS Wolverhampton.

Although such pads now have to have a containment system to manage the effluent, research has shown that they can still offer a low-cost alternative to housing or yards for beef cattle and dry cows.

“And there is strong evidence that the effluent produced should be treated as dirty water rather than slurry, which would get round significant NVZ restrictions on storage and spreading. This is something we will be following up with the regulators,” he adds.

Other topics under the ADAS spotlight include ways that farmers can improve production efficiencies while reducing greenhouse gas emissions, particularly nitrous oxides following the application of N fertiliser and organic manures. The use of anaerobically digested food and other wastes and compost recycling on farms will also be highlighted.

NVZ storage and best practice will also be highlighted on the AHDB stand. “It is vitally important that farmers look at the likely spreading windows available to them on their farms,” says Nigel Penlington, environment programme manager at BPEX.

“Farmers might find the five-month storage requirement (six for pigs) is insufficient, when they look at their cropping and harvest patterns. Also from next year they will have to use minimum available N figures for any slurries or manures applied – 35% for cattle slurry and 45% for pig slurry – in their nitrogen calculations.

“It is now, even more than previously, in the farmers’ interest to make the best use of the manure N content, as they may no longer be able to make up all the entire shortfall in N supply with bagged fertiliser, and crops could go short.”

NIRS muck testing will also feature. The technique is already widely used to test silage and feed, using infra-red scans to assess nutrient content. The process with manures is as quick; multiple scans are taken for each sample to provide a robust result, giving farmers greater confidence, Mr Penlington explains.

“This takes accuracy to a new level, allowing farmers to target manure use even more effectively. The first 25 farmers on the stand each day will qualify for a free test, so remember to bring your sample in a sealed bag or container.”