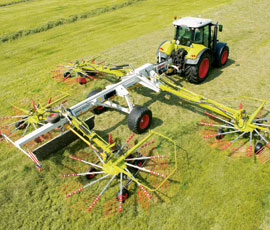 Forage equipment specialist Krone is planning a demonstration spectacular to mark the introduction of machines destined to push harvesting outputs to new heights.

First in line is the BiG M 500, which deploys a split-fold front mower and two wing units to cut 13.2m with every pass – enough for 20ha an hour, reckons Krone.

Its 520hp engine drives four wheels using hydraulic wheel motors and there is four-wheel steering for maximum manoeuvrability. With the auger swathing option installed, grass can be laid in a single swath or spread for a rapid wilt.

The firm’s new six-rotor rake – the Swadro 2000 – will gather up spread grass or swaths using its adjustable 10-19m working width to pull sufficient material together to suit the appetites of two self-propelled newcomers.

The most obvious change on the Krone BiG X 700 and 1100 destined for the event is a new operator’s cabin designed to provide a more comfortable working environment and improved visibility. 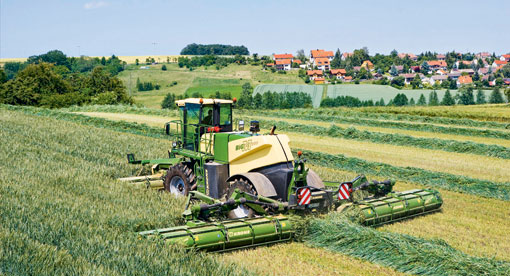 But underneath the vast rear bodywork, MAN engines have replaced the single and double Mercedes-Benz diesel installations.

High-tech engine management and common rail fuel injection produce big peak power outputs – up to 775hp for the BiG X 700 and 1,078hp for the BiG X 1100. But there is also an Eco Power alternative engine setting for applications such as second-cut grass that do not require such high-power output.

Come autumn, the operator can revert to the X-Power maximum output mode for chopping maize.

Claas, John Deere and New Holland (with the special 50th edition livery) will also put their latest self-propelled machines through their paces, while the alternative harvesting approach using chop-and-haul silage wagons will also be much in evidence.

In addition to the machines now turned out in Lely and Kverneland livery, Strautmann’s novel Continuous Flow System (CFS) pick-up, accelerator roller and chopping rotor combination will feature for the first time on a Super-Vitesse demonstrated by importer Reco, and Dutch concern Schuitemaker will have its revised Rapide 145 in action.

The MkII is narrower overall at 2.55m to meet future transport regulations but has the same internal width to maintain load capacity; the RapidStream front panel to improve loading performance; a new seven-row tine rotor, and faster unloading thanks to a hydraulic circuit now suitable for 120 litre/min oil flow.

Producers who like to bale all or at least some of their silage will take an interest in John Deere’s radical departure from normal round baler design.

It does away with the familiar clamshell format by using an arrangement of belts enclosed at the rear by just a ‘curtain’. 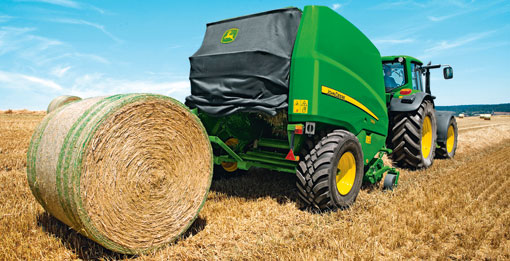 This lifts so rapidly once the bale has been netted that discharge time has been cut to just five seconds – up to 10 seconds faster than some round baler designs, says John Deere.

A new design of flexible side panel is said to help the baler achieve maximum density, while a drop-floor in the intake area helps clear plugs. A new pick-up with five rather than four rows of tines is also part of the package.

‘Pro’ versions of the Variant variable bale size round balers introduced by Claas have more output potential thanks to additional features over the standard Variant models. The 360RF (RotoFeed) and 365RC (RotoCut) make bales up to 1.55m diameter, while bales from the 380RF and 385RF go to 1.75m.

This gives the operator the confidence to push the baler to its maximum capacity, says Claas, for greater daily output. It will be first time out at a public demonstration for the latest Vicon round balers. The variable chamber RV4216 and RV4220 models use five endless belts and a closed chamber configuration with two rollers positioned at the front of the bale chamber to get bale rolling underway.

The RF3325 is the flagship of the fixed bale size line-up and built to a heavy-duty specification for silage baling. It uses 17 ribbed steel rollers to achieve positive bale rotation, aggressive roller cleaning and consistent density control.

Kuhn’s exhibit will feature the balers that used to be supplied under the Vicon name – as well as the i-Bio baler-wrapper from the Kverneland stable that has also now been added to the Kuhn grass harvesting range. 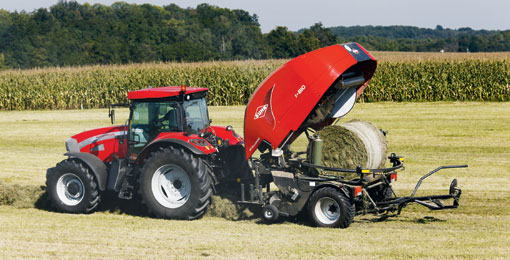 This novel machine bales and wraps in one chamber, making it a lot more compact than a baler with separate wrapper. Eighteen ribbed rollers form the bale-making system, fed from a 2.3m wide pick up via a rotor and 14- or 23-knife cutting unit, with a drop-floor helping to clear plugs of grass.

Despite the almost universal use of conditioning systems on mowers to encourage rapid moisture loss during the wilting period, some operators do like the weight and power advantages of operating a machine without conditioner.

Manufacturers have responded by introducing more options, with Fella’s contribution to this trend at the Grassland & Muck event being a third model for the manufacturer’s inner skidless disc mower range. 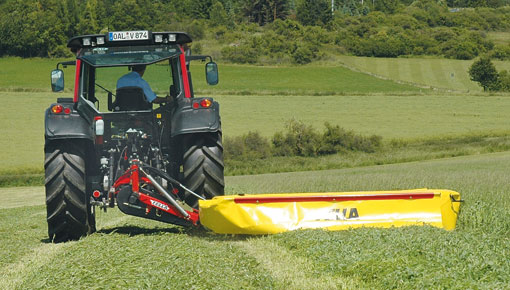 The SM 3280 ISL joins two existing models – the SM 2460 ISL and SM 2870 ISL – with a design that does away with an inner skid and has direct drive into the top of the first disc. Thereafter, drive is transferred to the other discs by a series of spur gears housed in an oil bath, with primary drive provided by vee belt from the tractor pto.

New features include a novel linkage levelling system that helps counter the offset weight of the mower and is complemented by hydraulically adjustable ground pressure control to minimise friction against the field surface.

Kuhn also has another non-conditioning triple mower in its portfolio but this one is a wide-working triple.

The GMD 8730 fells up to 8.75m of forage with every pass using two rear-mounted units with Lift-Control hydro-pneumatic suspension to follow ground contours effectively in combination with a 3.1m front-mounted disc mower.

Fast-fit blades are installed on the Optidisc cutter bar as standard, along with a mechanism designed to protect the gear train from damage.

The latest front-mounted mower being featured on the Claas working plot does have a conditioning tine rotor – as well as new Active Float hydro-pneumatic suspension designed to follow uneven contours without scalping. It employs two single-acting cylinders connected to four pressure accumulators.

The Disco 3100FC has the P-Cut bed with the discs set lower than with previous designs for a cleaner cut and improved crop flow.

Operators responsible for filling the clamp will be shown two very different heavy-duty newcomers in action – an industrial spec Merlo telescopic handler and a wheeled loader from the construction equipment arm of New Holland.

The P55.9CS telehandler sports a 140hp Deutz engine and 40kph hydrostatic drive, as do others in the Merlo range, but also 5.5t of lift capacity.

The company says that the machine’s heavier-duty chassis and boom construction are clearly evident, with the low boom pivot giving good rearward visibility.

Its principal novelty, however, is a cab suspension system designed to give the operator a more comfortable ride as it tackles the rough and tumble of a silage clamp.

It is powered by a 194hp version of the FPT 6.7-litre engine that motivates many New Holland tractors, with electronic fuel management providing a choice of three power/torque curves: up to 157hp for light carrying duties, 182hp for normal loading situations, and the full whack for more demanding applications.

A torque converter and four-speed powershift gearbox send this output to the wheels mounted on a rigid front and oscillating rear axle. Load sensing hydraulics deliver up to 206 litres/min and it weighs in at about 14.5t in “long boom” configuration.

Manitou’s less spectacular but arguably more significant MLT 625T is a newcomer to the field of mini telehandlers.

The new Massey Ferguson 9000 Series telescopic handler range will also be on show, so potential buyers can check out the novel wrap-around right rear-quarter window design that eliminates one of the pillars that otherwise blocks the view.

Likewise, the latest Quicke Dimension tractor loader range, which now comprises 20 models, including the Q98, which is reckoned to be the world’s largest and fits big six-cylinder engined tractors.