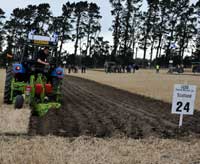 New Zealander Bruce Redmond was the winner in the conventional ploughing category, with Andrew Mitchell from Scotland second, and Samuel Gill from Northern Ireland third.

• Next year’s World Ploughing Championships take place on 13 and 14 May 2011 in Lindevad, Sweden.