The D-Max has struggled to turn itself from a popular, low-priced workhorse into a refined top-spec option. The cheapest truck on test came with an asthmatic 1.9-litre engine, which stood out like a sore thumb against the big-blocked Amarok and Ranger.

The indecisive auto transmission and complicated screen didn’t win many admirers either – we reckon you’re off better sticking with Isuzu’s lower-spec versions. 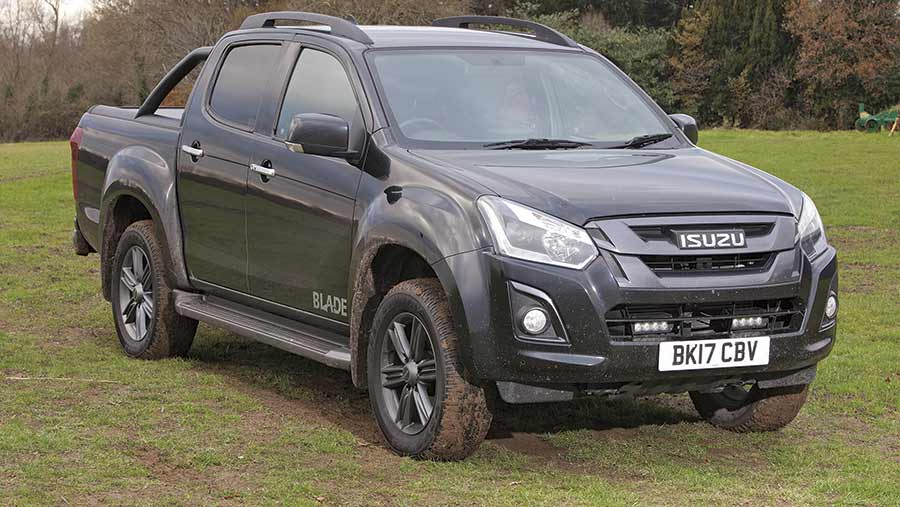 It came as no great surprise that the D-Max was very pedestrian in getting to 62mph in 13secs.

But what was more of a surprise was the eardrum bashing it gave the occupants when doing so – a reading of 74db in the cab at peak acceleration was only topped by the Ranger with the throttle pushed to the floor.

We wouldn’t be ticking the six-speed auto box option of the spec sheet either.

During our mixed-driving week, the auto gearbox proved very unsettled as it hopped around in search of the right cog.

Throttle position didn’t seem to have any relevance to when the box would shift up or down and we would definitely favour saving a few quid by picking the simpler manual option. 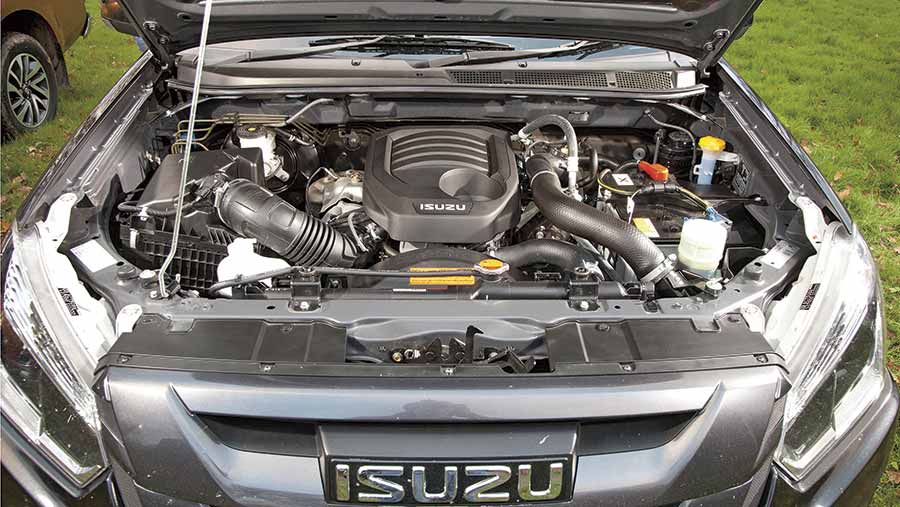 However, it was comfortable at 60mph and the 64db kicked out at a settled speed was reasonable, though a little way off the eerily quiet Hilux at 62db.

It’s a shame the top-spec D-Max doesn’t have the option of a bigger lump, as it could really worry the mid-ranking stalwarts such as the L200 and Nissan Navara.

That said, having a car-sized lump wasn’t all bad and it topped the economy league table with a very respectable return of 31.68mpg.

The interior, with its orange stitching and Blade-etched seats, was easy on the eye – albeit more young farmer than country gent.

Opening the driver’s door at night reveals the word “blade” illuminated on the floor in an orange glow, which is unlikely to impress anyone born before the turn of the millennium.

The controls are logically positioned, with simple dash read-outs, decent plastics and plenty of storage space.

The lack of chrome was also a welcome sight – especially when compared with the Hilux – and added to its workaday image. 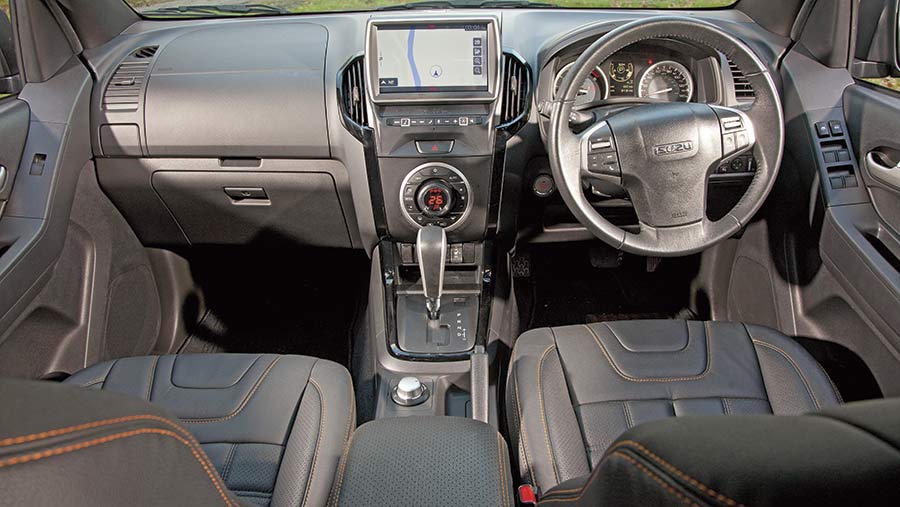 Heating and air-con functions were some of the easiest to use in our test, with a large rotating temperature dial in the centre and big, simple buttons around the edge.

Heated seats are controlled through a rocker switch, which we found refreshingly basic compared with the Ford Ranger’s bank of small, close-together buttons.

However, the same can’t be said of the big 9in touchscreen display, which had a selection of hot-key buttons underneath for the menus, satnav and volume control.

We felt these needed to be clearer and, for first-time drivers, it was a bit of a guessing game to find the right button.

Connecting a phone was fairly simple, but talking hands-free left a lot to be desired – even with the microphone volume cranked to max, the caller on the other end still struggled to follow the conversation.

Points are also lost for a lack of in/out adjustment on the steering wheel, which may be an issue for shorter drivers.

Paying the £412.50 extra for laser lights gets you two front grille-mounted LED light bars, which are wired up to the main beam and leave Blackpool in the shade when switched on.

Despite having a smaller-than-average engine, the D-Max can tow the full 3,500kg, although daily heavy towing will likely take its toll on the 1.9-litre engine.

The ride on farm tracks was equal to that of the Hilux and someway behind the coil-sprung Navara. It’s not horrendously bone shaking – in fact, it’s exactly what you would expect from a farm pickup.

Riders in the back sit lower than in some of the other test vehicles and rear access is also tight, so a second-row seat isn’t particularly appealing for long jaunts.

Elsewhere, the reversing camera had an angled yellow line across the screen that wasn’t very relevant and actually became confusing. 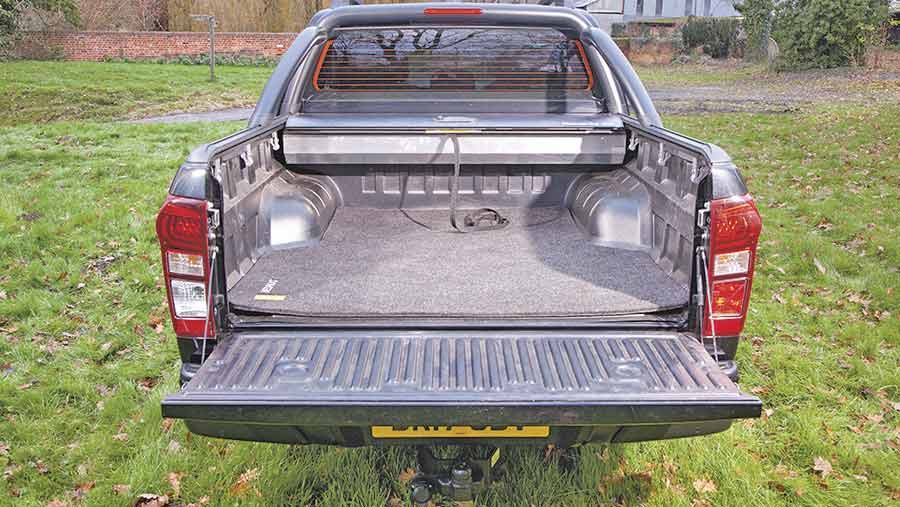 A simple, but very effective detail was a couple of small dampeners added to lower the tailgate in a sedate fashion, whereas most of the others had to be supported to avoid a thud.

The height of the gate when opened was also the best-on-test at 810mm, so lugging in 25kg feed bags is less of a chore.

Our D-Max was fitted with both hill start assist for scaling inclines as well as hill descent control for safely returning back down them, while it offers a payload of 1,101kg (second only to the Hilux).

The Blade we tested is the range-topper, with four options below it starting with the entry-level Utility models coming in at £15,704 (excluding VAT), which offer hill descent control, air conditioning and LED running lights.

In terms of extras, the real leap is to the Utah spec, which gets you a host of mod-cons, including satnav, smartphone connectivity and leather seats.

Isuzu has let Arctic Trucks get its hands on the new D-Max and you can now buy the AT35 version of the pickup, which offers wider arches and tyres, a splash of AT logos all over and embroidered headrests, with the double cab version setting you back £37,995 (including VAT).