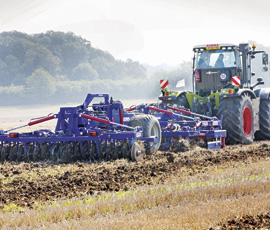 There are two fundamental ways to save money on tillage costs. First, have a strategy that cuts down on unnecessary fieldwork (so-called recreational tillage). Second, respond to what your soils are telling you.

Tweaking the kit to ensure you do a good job is also an important part of cost-effective cultivations. But you can save a lot more by not doing a pass that wasn’t needed. Meanwhile the kit you’re using is getting heavier. You can do what you like to reduce ground pressure, but compaction will always be a problem. It must be managed or yield will reduce, and with wheat at £200/t, that makes minor fuel savings pale into insignificance.

Keep an eye out for obvious signs of soils that will be limiting a crop’s potential. Water gathering on headlands and thin crops point to problems beneath the surface.

But the surest way to tell is to get digging. The best time to do this is early summer, when you can see all the roots and will be able to identify any pans that will be limiting growth. Crop roots go to 1m depth, so a mini-digger may be the best tool for the job.

Typically a compacted layer will develop just under ordinary cultivation depth, so 4-6in for shallow cultivations and 8-12in when ploughing. Sand compacts easily, but is easy to put right, as long as a pan does not develop at depth.

Clay looks worse, and a pan can be hard to remove, but a dry summer can naturally cure a problem. Silts are also very susceptible to damage, and you need to keep an eye on these.

You can only rely on shallow work for so long before you need some deeper cultivations. Typically you should aim to have a rotational policy that deep works a third of the farm every year.

But this will be your most expensive field work. Target it to the areas of the field it is needed most – tramlines and headlands, for instance. Set it to the correct depth for each field it works, which is why an exploratory dig is worthwhile. And make sure it shatters rather than smears – pull a subsoiler through wet soils and you do more harm than good.

A key way to cut down on subsoiling is not to create the pan in the first place. Keep wheelings to a minimum, especially at harvest time. It can require a regimented controlled traffic policy to keep the combine, grain trailer, baler and bale-grab from covering the entire field.

There is combination kit now available that is masterful in its design. You can adjust on the move, every component has been refined to create the perfect tilth in a staggering array of circumstances. The tragedy is that too many farmers set them up once and then don’t make any on-going adjustments.

There are three components you should adjust, depending on field conditions:

• Disc angle: Adjust this depending on trash – a more aggressive angle will bury more but leave the surface less level. But a good mix of soil and stubble should be the key requirement. Modern drills can cope with surface trash, even if your fastidious sense of what a good job looks like cannot.

• Tine depth: In dry conditions, keep it shallow – you don’t want to bring up clods or risk losing precious moisture.

• Roller pressure: This should be set to complement the tines, so transfer as much weight to the rolls as possible when it’s dry.

Usually tines, followed by discs and then rolls is the best combination. For high trash conditions you may wish to lead with the discs.

Ideally you will do the job in just one pass. But weed control could dictate two passes are necessary. In this case, the early one should do little more than scratch the surface to encourage weeds to chit. The second pass creates the final tilth for the seed-bed.

On many farms it is getting harder to justify the plough, or maintaining a tractor best-suited to pull it. It does have a key role to play in rotating cultivation practice, and is invaluable for weed control.

Ploughing is an easy way to lose money, especially if you dogmatically plough every field simply because this is easier to manage. It doesn’t have to be expensive though – on light and medium soils broad and shallow ploughing can match the cost of shallow cultivations. Here trash burial should not be a key aim, and a good job will still be done even if it doesn’t look satisfying. Remove the skimmers and set the mouldboards wide, if you can.

The one area where the plough still reigns supreme is blackgrass control, however. Good trash burial is key, and this comes down to correct set-up, which is something of a black art.

The skimmers should be set at a height and angle to throw the top inch or so of soil into the bottom of the furrow. Correct set-up to achieve this will depend on soil conditions and forward speed. This can be especially tricky as a plough will vary its depth depending on field conditions. This is less of a problem if you set it to go deep, but then there are cost implications of deep ploughing.

“If the seed-bed’s right, the crop will benefit amazingly. But if you work the soil when it’s not fit, it’ll come back to haunt you throughout the season.”

And he should know – Basil Baird (Fareham) grows 400ha (1000 acres) of potatoes, mostly on grade 1 alluvial silty clay loam soils around Chichester. With half of the crop now salad potatoes, if the bed’s right, the crop has a better chance of maximising yield and quality. But compaction and smearing are easy and costly mistakes to make, and ones Mr Baird is keen to minimise.

“The one big change we’ve made is to form the beds in the autumn, then let nature break down the clods over winter and form the tilth,” he says.

The trick is to subsoil as soon as possible after harvest, plough, and then ridge up straight away with the bedformer. For a while this was done without the plough, but Mr Baird found the beds they formed weren’t cloddy enough.

“You need the maximum surface area to break down over the winter. It works without the plough on sandy land we farm elsewhere, but our clay loams need the plough to form the best tilth.”

For Mr Baird the saving is that the weather does the work for him, and generally does a better job than smashing into soils with heavy kit.

“All we’ve changed from our original practice is to shift when we form the beds. It’s not a silver bullet, and won’t work in every situation, but it works for us.”