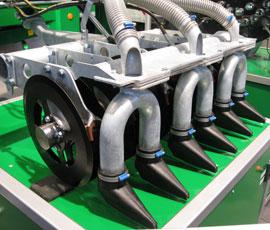 Samson has re-designed the injector nozzles on its TE and TD slurry tankers to give twice the number of injectors per metre.

Three pipes are grouped into one-metre sections and attached to a plate that splits the flow into two injectors. Disc bearings have also been upgraded to lifetime units, normally found in car axles.

The 12m version will be available later this year and 9m and 18m versions will follow. An anti-drip device has also been incorporated into the new system, which the company says will come as standard on the new models.