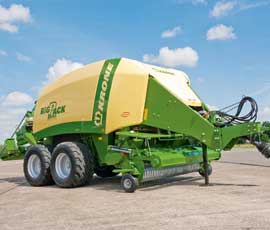 As ever, Grassland UK will be a great place to see new equipment working. Andy Collings rounds up some of the new models on show.

Although Krone says it won’t have the Ultima non-stop round baler on show, the Big Pack High Speed (pictured right) will be there.

By increasing the throughput of the variable chamber feed system and also the speed of the plunger, outputs in straw are claimed to be up to 80t/hour.

Krone will also be showing the Bellima fixed chamber round baler (pictured above) for the first time. Featuring the camless, low-maintenance EasyFlow pickup, this baler is based on the KR 125/130 round baler.

Kuhn is set to introduce a new round bale wrapper with auto loading capability. The trailed RW 1600 C turntable wrapper uses a new system which picks up a bale and places it on the wrapping table without any input from the driver.

Autoload senses when a bale is within the arm and lifts it accordingly. If there is a bale already being wrapped, it will hold the bale clear of the ground until the wrapped bale has been unloaded.

The system can handle bales weighing up to 1,200kg and the whole machine – the loading and wrapping process – is controlled from a computer.

John Deere’s approach to faster round baling is the Fast Release System, which is now employed on new 900 Series variable chamber round balers (pictured right).

Rather than using a traditional heavy door, these balers use a ‘curtain’, which allows bales to be ejected in less than five seconds – 10 seconds faster than a conventional machine.

900 Series balers are available with a choice of 2.2m-wide RotoFlow or MaxiCut 13 or 25 blade pre-cutter and produce bale diameters from 80cm to 160cm and 80cm to 185cm, respectively.

Vicon’s latest range of round balers, complete with upgrades for the 2012 season, are set to be displayed at Grassland. The company says it has ‘tweaked’ the netwrap system to reduce bale tying speed and, in doing so, has boosted output.

Revised electronics through the Focus ll control box are also claimed to have simplified the monitoring and control process for fixed and variable chamber balers. The LCD screen now enables bale diameter and density adjustment, and includes a steering wheel graphic for in-row guidance.

Claas will have its new Rollant and Quadrant balers, larger rakes and 9.1m triple mower, complete with autoswather.

The largest crowd-puller, though, could be the company’s new multi-power Jaguar

These top-end machines now have single engines that can automatically change between 11 different power output levels in response to load demands and, says Claas, be more efficient than the previous two-engined versions.

Kverneland is keen to tell visitors to Grassland how to cut costs without losing productivity – and that, it says, could mean using a triple mower without a conditioner. The new 5087 triple uses three 3.2m mower units for an 8.7m-cutting width and requires a 140hp tractor to power it – a similar sized mower with conditioning units would require up to 250hp and use significantly more fuel. 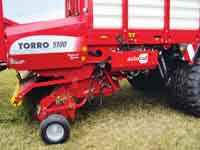 Pottinger plans to demonstrate the latest addition to its HIT range of trailed tedders – the 10.11 T, which is a trailed 10-rotor unit having a working width of 10.6m.

In operation, the chassis wheels remain on the ground at all times – an arrangement which means no extra weight is added to the tedder by having to carry raised wheels. It is a system which also allows good headland manoeuvrability and smoother running.

The company’s auto knife-sharpening system is now available for the company’s Torro loader wagon, enabling all 39 knives to be sharpened in situ in just three minutes.

Kongskilde will show the new 60 Series trailed forage harvesters from its JF-Stoll brand. These feature new chopping rotors that have been designed to provide a true ‘flywheel’ effect – the rotor is heavier and also has the ability to create a greater blowing capacity. As a result, capacity, when compared to the 50 Series models, is 25% higher.

FCT 1060 and FCT 1360 versions can have hydraulically folding chutes which, for transport, enables the chutes to be folded forward and rested on a stand at the front of the draw bar.

Included in the specification are electro-hydraulic control systems for the chute, reverse and pick-up.