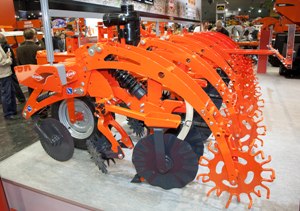 Kuhn has launched a novel strip cultivator for sugar beet, maize and oilseed rape crops which leaves ground between rows untouched.
This means just 20% of the field is cultivated which cuts fuel costs and improves work rates.
Because soil movement is decreased, moisture is preserved in the seeding area and soil temperatures increase, which helps plants establish quickly. Erosion risk is also reduced as most of the field is untouched.
A leading disc cuts the initial slot which is followed by a set of angled spiked discs that clear trash out of the seeding area. Behind this, an adjustable leg can loosen soil to 30cm to improve rooting and an optional applicator can drop fertiliser behind the leg.
Wavy discs either side of the leg aerate the soil and a final wheel consolidates the seed-bed.
Several versions will be available from 4 to 12 rows and row width can be adjusted from 45cm to 80cm.
All soil preparation components are spring assisted to work in stony conditions.
A six metre, eight row machine costs €25,000, however it’s predominantly aimed at countries growing large areas of maize.