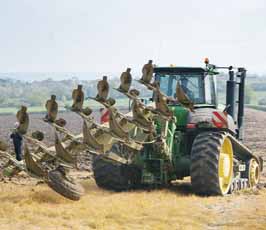 A stolen tractor worth more than £200,000 has been recovered by its owner after a tip-off from fellow farmers.

It was taken along with an eight-furrow Dowdeswell plough in what was thought to be Britain’s biggest single theft of agricultural equipment.

The tractor was found on 12 March in a field close to the M40 and about 35 miles away from Mr Waters’ farm business, DJW Contracting. The plough, worth £30,000, remains missing.

Mr Waters told Farmers Weekly that word-of-mouth through his contractor clients and other farmers led to uncovering the machine’s whereabouts.

“It was then down to a final drive around until we found it sitting in a hollow behind a hedge,” Mr Waters said. But he added that the machine had been severely damaged.

“The windows, lights and instrument panels have been smashed and thieves have removed panels, probably looking for a Tracker device,” he said. The Starfire Receiver GPS system had also been removed.

“The damage was probably caused after the tractor had been left in the field,” Mr Waters said.

According to locals it can only have arrived in the 48 hours or so before it was found, he said.

“We think it was driven there in stages rather than transported and dumped. So where it was in the two weeks or so before that is a mystery,” he added.

If you saw the tractor (reg OU08 FJV ) between 23 February and 12 March or have seen the eight-furrow Dowdeswell plough, please contact your local police force or call us at Farmers Weekly on 020 8652 4911. We will pass on the information.