Inside a few shabby-chic ex-safe rooms in London’s famous Hatton Garden jewellery quarter, some of the best and brightest minds are refining and polishing a technological diamond that is set revolutionise applied agronomy.

From its days as a start-up at the Imperial College Incubator innovation and entrepreneur hub, the company launched into agriculture full time in 2016.

Its advisory board now includes the head of Google UK and farming giant Velcourt’s technical director, Keith Norman, and its mission is to take a farmer’s crop imagery data and produce something that can directly influence management decisions in real time.

The returning data – of which, a shape file containing an input application map is one example – must also be affordable and provide a tangible return on investment, according to Hummingbird’s CEO Will Wells. 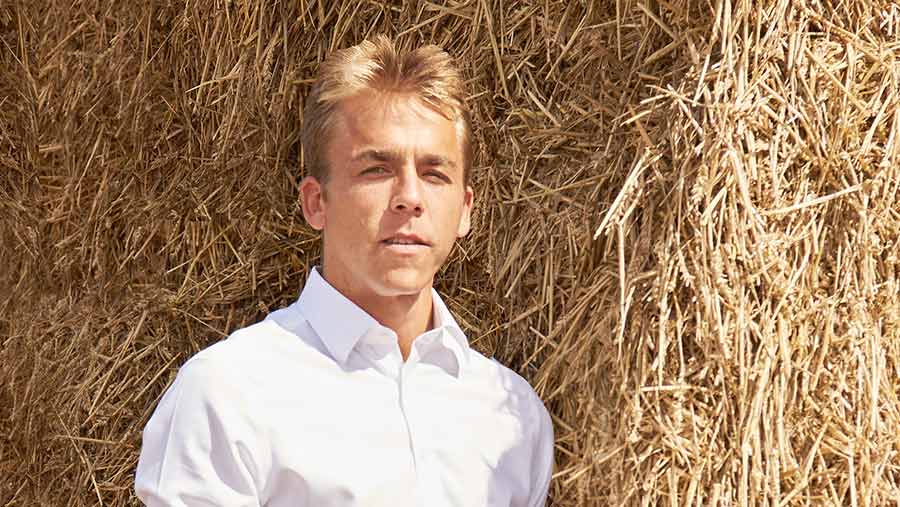 “Effectively, we are using drone, satellite or plane imagery, combined with machine learning algorithms to solve practical management problems, alleviating the issue of walking and scouting for assessing crop development, disease and weeds over large areas of land.”

Hummingbird has a team of 40-50 CAA-qualified drone pilots – many farmers and junior agronomists – that fly over crops and capture image data using state-of-the-art multispectral cameras.

The data is then transferred into its cloud-based platform, where Hummingbird’s expertise comes into play. 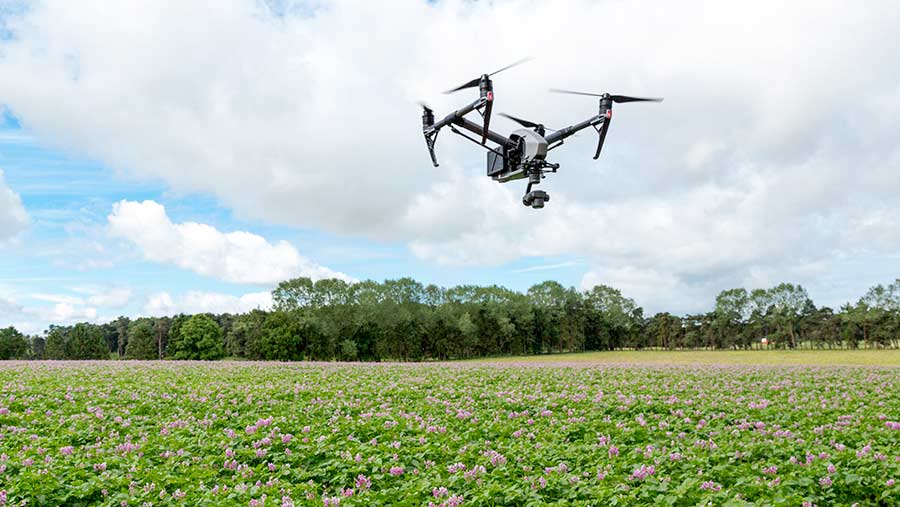 They have created a programme that begins to process the information automatically as soon as it hits the cloud and, within hours, its machine learning algorithms – a software process that learns and produces predictions from data – will have produced any number of desired analytics, depending on customer needs.

These are available to customers within 24 hours via Hummingbird’s online platform on computers or mobile devices.

All data is in a form that is transferable into software systems such as GateKeeper or, if required, machine control units for variable input applications.

On top of the increased interest in the UK, the firm has also expanded into grain-producing giants Brazil, Ukraine and Russia.

Customers growing a range of crops including wheat, barley, oilseed rape, sugar beet and potatoes can access a wide range of precision farming products via the platform (see table). 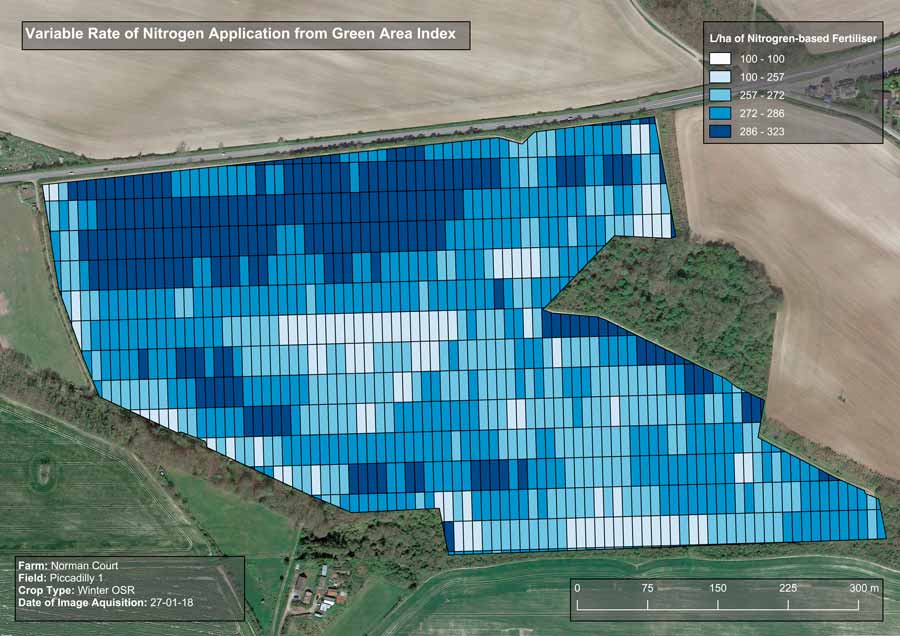 Plant counts in root crops are also possible to help inform the need for re-drilling and a yield prediction tool can allow beet growers to better plan lifting schedules late in the season.

It is paid for on a subscription basis, which includes a set number of drone flights at critical growth stages and costs £20/ha/season for wheat, barley, oilseed rape and sugar beet and £25/ha/season for potatoes.

At present, the company’s biggest cost is piloting the drones and this is reflected in its price structure.

However, Mr Wells expects these costs to come down as more agronomists, farmers or farmer groups invest in their own drones with cameras and is something the company is firmly in favour of.

“Right now, the hardware [drone with camera] would cost a little less than £10,000 and for a big farm, payback on that would be palatable, but [technology] costs are coming down all the time,” he says.

The company can also tap in to the Planet satellite platform, which has a daily revisit and resolution down to 0.8m/pixel, which can offer farmers a more cost-effective option for more basic crop analysis.

“The spatial resolution of satellites is also improving and cloud-penetrating technology will also make it more reliable in the future,” adds Mr Wells.

Mr Norman says there have been “pretty pictures” of fields circulated in crop sector for years, but except for nitrogen application maps, which are well understood, there has been no clear direction on data interpretation and its practical application.

“There are an awful lot of biomass maps, for example, that give a generic feel for a field without honing-in on what the information actually means and if you need to do anything on the back of that information to make a difference.

“One of the things I’ve been passionate about is getting meaningful data from the field with the precision and scale we need to make interventions in an appropriate way,” explains Mr Norman. 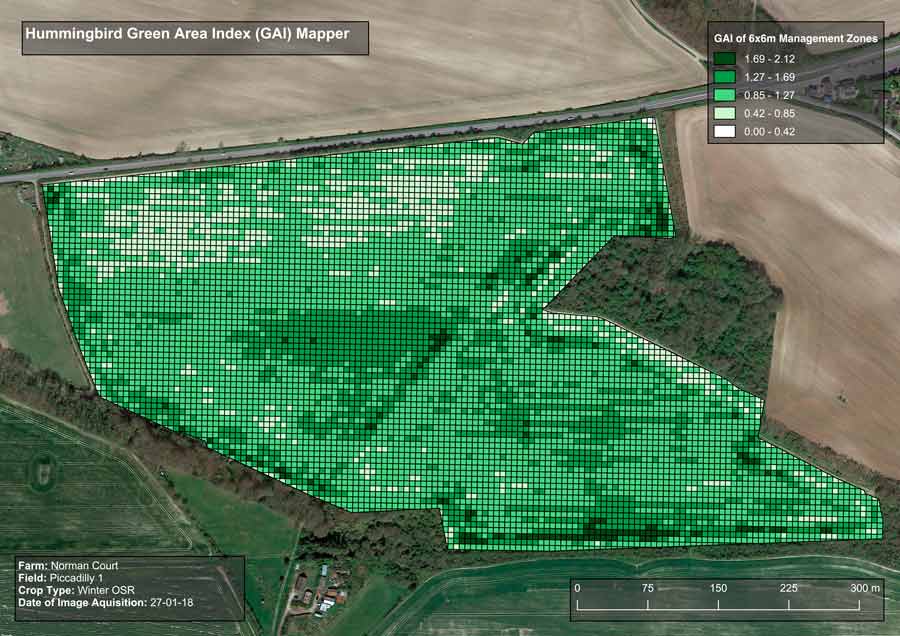 An example is Green Area Index (GAI) in oilseed rape, which is intrinsically linked to yield and for a 3.5t/ha crop a target GAI of 3.5 is required. Each GAI unit requires 50kg/ha of nitrogen.

There are apps that take 1m square images to give a GAI figure and a decent general idea of crop nitrogen requirements, but a Hummingbird-analysed drone image of the whole field down to 2cm/pixel accuracy takes canopy management to a new level.

First, variable rate nitrogen application plans can be drawn up for each pixel grid to achieve optimum canopy size.

Second, spring plant growth regulators (PGRs) can also be applied where most needed using variable rate maps. This is vital, as applying PGRs to plants too small can cause yield loss if taking a blanket approach across a field.

Third, areas of high GAI do not need early applications of nitrogen so applications to those areas can be later in the season, prolonging the life of the crop and extending seed fill.

“At £30/ha for some oilseed rape PGR products, it is very cost-effective to have variable maps and the savings per hectare will pay for an extra sprayer pass,” explains Mr Norman.

While the company has a suite of products that are tried and tested and provide the core offering to subscribers, it has a heavy focus on research and development and a long pipeline of new precision tools in development (see panel below).

The nature of building algorithms means that each requires a vast amount of ground truthing and Hummingbird demands a minimum accuracy of 80% before any soft commercial roll out.

Development will be accelerated by a recent round of investment that netted the company £3m, which included a European Space Agency award, and a further European Innovation Partnership Award will be spent on expanding field trials and improving its technology.

Mr Wells says engaging with customers – mostly agronomists and top-end farmers – is also crucial in the development of new innovations, because the more year-on-year data and feedback they can obtain, the better Hummingbird’s algorithms will become.

“It’s not as difficult to get to 80% accuracy as it is making small gains beyond that 80%, and that’s why we want to keep farmers in the ‘feedback loop’. It is an opportunity to improve our machine learning and we very much value that feedback,” he adds.

This is particularly crucial to the “Holy Grail” of accurately identifying pre-symptomatic disease – something the company is in the latter stages of being able to achieve.

When Hummingbird’s software identifies what it believes is yellow rust in a wheat crop during imagery processing, if the farmer validates in the field for the company, he or she will receive £5 as an incentive.

It is also conducting split field trials using its asymptomatic assessment of disease in wheat ahead of the T2 fungicide timing, which aims to help improve timing and fine tune rates.

Agronomists will be engaged in ground truthing and working alongside the EIP-Agri Award project, which is being managed through the Rural Payments Agency (RPA). Results will be published on a new website to show what the technology can do and the return on investment it can provide.

On a basic level, Mr Norman says the Hummingbird model will help to counteract the disadvantages of farms getting bigger, where crop management can suffer because of diseconomies of scale.

The development and introduction of more advanced remote sensing and biosensor technology – such as electronic noses that can smell plant pheromones released when under pest attack – is also gathering pace.

This will provide accurate pictures of where weeds, pests and disease are and allow precision pesticide application on an unprecedented scale. 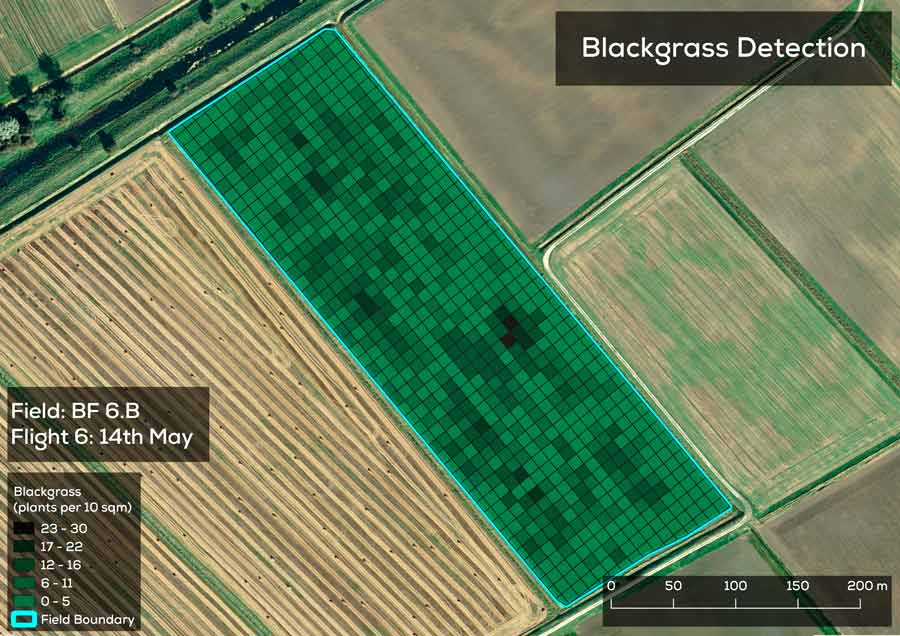 With drone spraying unlikely to be allowed in the UK, the more realistic target is having four or five crop protection products on a sprayer and using direct injection technology to mix and match the applied pesticides on the go, according to detailed application maps.

“The transition is going to be gradual, but Hummingbird is paving the way and will be an integral part of integrating sensing technology and farming.

“We probably won’t see it for at least another five years because at present, the data analysis is outstripping the development of the technology for the actual application on the ground,” adds Mr Norman.

Hummingbird is offering many products to its subscribers that are still in the development phase. These include: