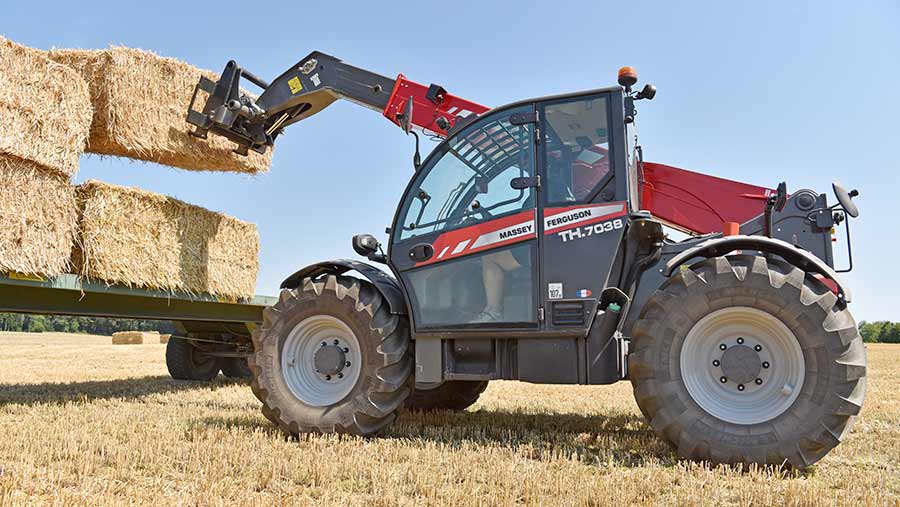 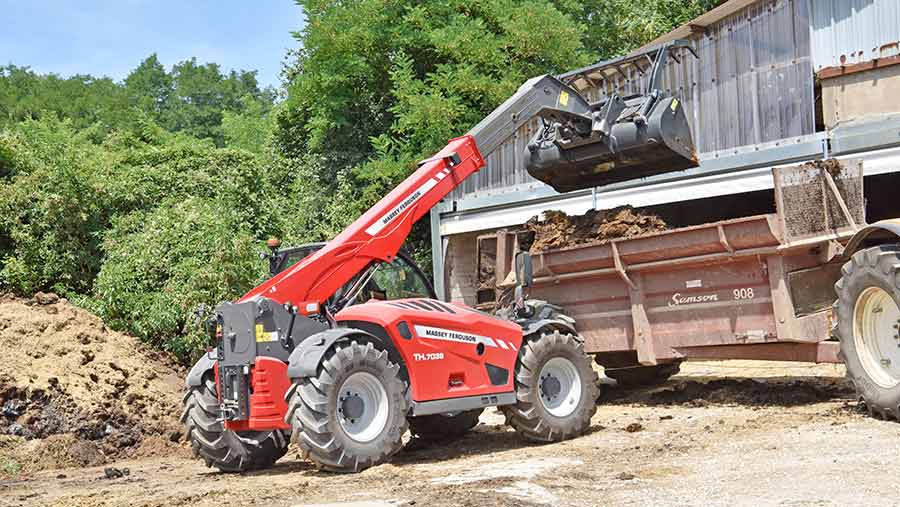 Other than its colour scheme, the TH.7038 is identical to the Bobcat TH38.70 tested last year.

We duly repeated the tests to see if there was any significant difference between the two, but unsurprisingly, most of the results were within spitting distance of one another. The turning circle was the only anomaly, which could be down to the setup of this particular machine.

In line with our findings last year, the Massey turned out to be a simple but decent machine that delivers impressive hydraulic performance. However, you do need to give it a few revs to get any decent return from the 190-litres/min pump.

We liked the solid construction-spec feel and spacious cab, but like the Cat, it was a fairly noisy place to sit.

The handler’s shallow tipping angle also made it slow and tedious to fully empty a bucket. 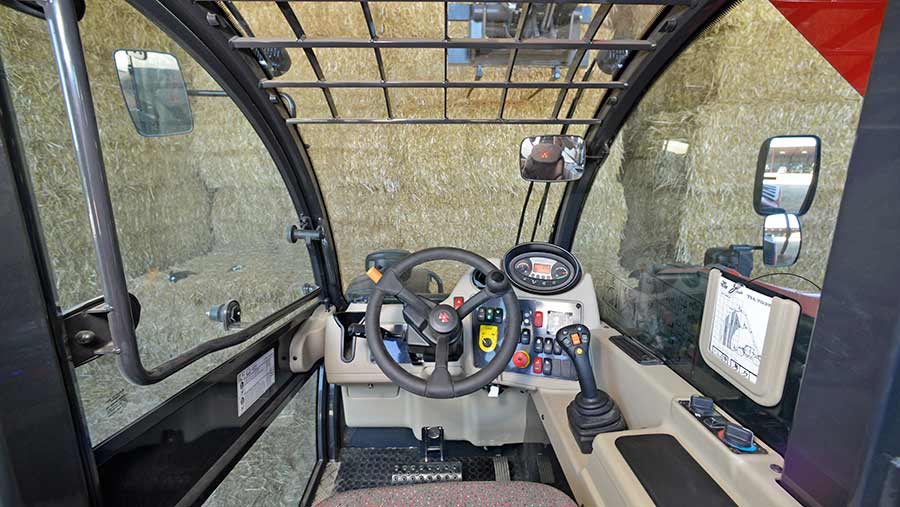 The Massey has one of the most basic cabs in the test, which for most people is no bad thing.

There is also a reasonable amount of space behind the seat for stashing ropes and ratchet straps and most of the switchgear is reassuringly solid.

However, because you sit fairly low in the machine and there’s a bulge at the top of the engine bay, visibility out of the right-hand side isn’t as good as some of the other handlers on test.

You do get a decent view of all four mudguards though, so there are no excuses for knocking it about.

Unfortunately the base of the door can’t be pinned back and the catch is a bit of a stretch to reach, but the wide opening and relatively low cab floor mean it’s a breeze to hop in and out.

Generally, the MF’s controls were simple, with a straightforward joystick, shuttle lever and pedal arrangement.

Some of the testers found the joystick a little basic and heavy to use, but it does make it easy for anyone to operate.

If we’re being ultra picky, the armrest is a little high and can’t be adjusted like it can on the Cat.

There are also a few functions hidden away in the screen that you can only properly fathom by delving into the manual. These include the creeper speed setting, intermittent reversing fan setup and oil flow to the third service.

Once we worked out the obscure lettering of the functions, we got on well enough with them.

One feature we did really like was the auto-electric handbrake that flicks on and off without you having to think about it. This means the handbrake should always be on when you disengage drive and hop off the seat. 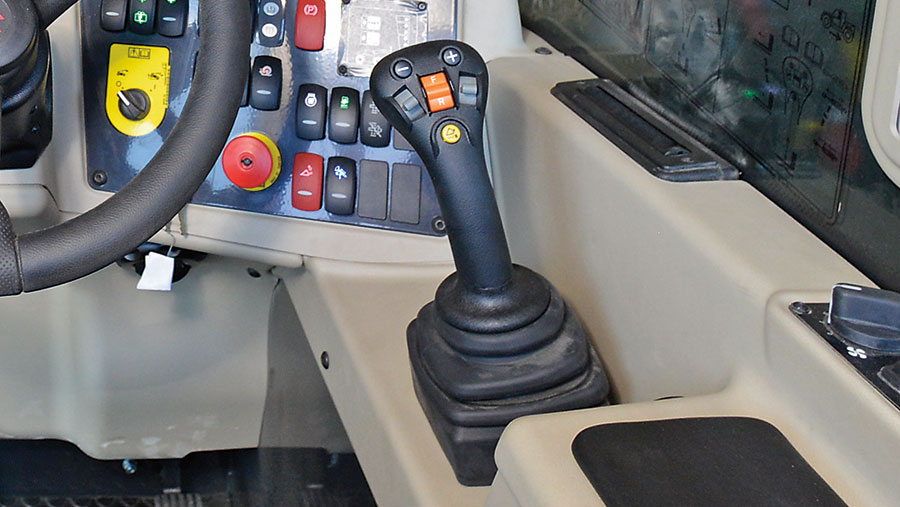 Like the Bobcat on which it’s based, the TH7038 sports a new four-cylinder engine from South-Korean construction giant Doosan.

It gets round Tier 4 final emissions regs by using exhaust gas recirculation, a diesel oxidation catalyst and an SCR system.

As for fancy functions, these are limited to a creeper setting that allows drivers to adjust revs independently of forward speed and a system for setting intervals for the hydraulic reversing fan to kick in.

Once we got to grips with the lettering of the functions, we found the creeper speed easy to use and the speed adjustment on the joystick is a nice touch.

The two ranges are changed using a rocker switch on the dash and the handler has to be at a standstill before you can do this.

However, it does also have a two-speed hydrostatic motor that can be changed on the move. This is engaged by pressing a button on the end of the left-hand forward/reverse shuttle lever and when activated, it feels as if you have another gear to play with.

Rather than an old-school dump pedal, standing on the sizable brake pedal disengages drive so you can rev up to shift a heavy load.

The transmission is also set to creep when lifting off the brake pedal, so you don’t have to use the accelerator when inching up to loads.

A 190-litre/min pump make the TH.7038’s hydraulics seem sprightly, but it does need to be given some revs to unleash its best performance.

This meant the handler struggled in the low-rev cycle time test, but when we gave it full power, it was able to dominate. It’s a shame, as operating at high revs should be unnecessary for most tasks.

As for boom suspension, there is a two-stage accumulator system, which means it can adapt to different sized loads. This can also be switched on and off using a button on the joystick, which we thought was a handy feature.

The EN 15000 safety lockout could be overridden using a key on the dash, but thankfully we didn’t need to resort to using it that often.

For some, the positioning of the hydraulic couplings on the boom will be a little awkward, but there’s a handy system for releasing the pressure in the lines before uncoupling. 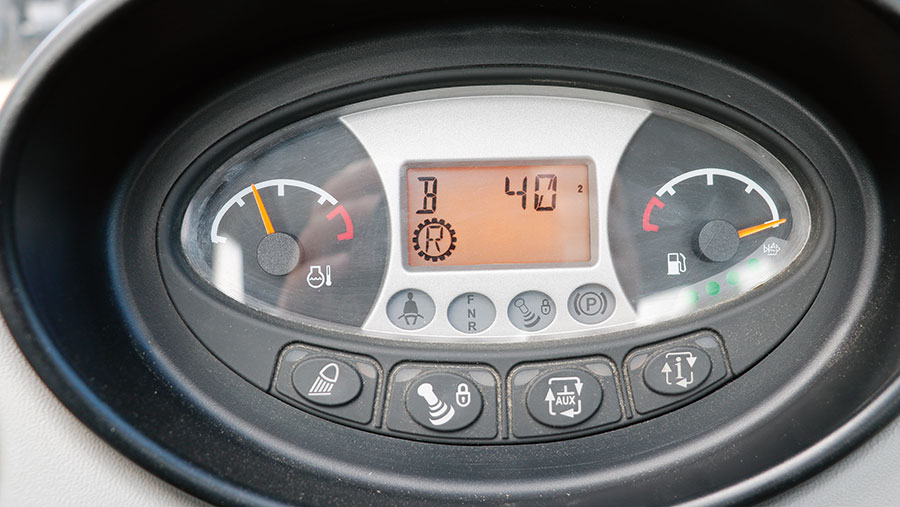 The Massey Ferguson and Bobcat partnership goes back many years, and until recently there was a clear deal where Bobcat covered the construction market and Massey handled the agricultural side.

However, Bobcat now offers ag-spec models too, so the two are effectively in competition. That said, the machines are virtually identical in spec and price, so the decision on which to buy comes down to the dealer or colour you prefer.

Bobcat offers more choice, but Massey Ferguson has chosen to concentrate on five key models, with the TH.7038 being the biggest.

At the compact end of the scale there’s the TH.6030, which has a 3t lift capacity and a 5.89m reach. Power comes from a 100hp Doosan engine, it has a simpler hydrostatic transmission and there’s a 100-litre/min hydraulic pump on board.

The rest of the 70-series is fairly similar in size with different engine, hydraulic and transmission options.