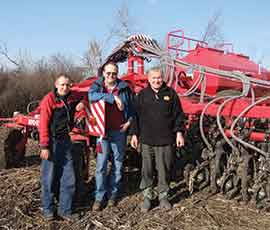 In our latest update from Eastern Europe, well-travelled farmer and agronomist Robin Jewer explains why selling all the farm’s kit is the best, and most gung-ho, way to implement a no-till system


After several years spent switching an 18,000ha Russian farm from heavy tillage to a no-till system I’ve decided to change farms. And countries.

I’m now based in Vinnystsia, a town 150 miles south-west of Kiev. Ukraine is a nicer place to work than Russia and the farm is a big start-up project covering an initial 12,000ha, but growing to 50,000ha by the end of next year.

Being a new farm means we can tailor our machinery purchases to the job, rather than making do with existing kit and adapting the farming system to suit it.

For now we’ve got one big 330hp Case tractor, which spends its time pulling the 9m Agrosuyuz direct drill. It sows wheat and soya, but we have a 16-row precision drill for maize and sunflowers, too. 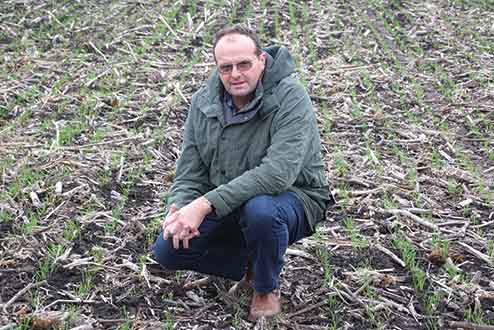 We’ve also got two 120hp tractors in the shed, which do all the spraying and spreading, as well as two Case 5130 combines. Buying all the kit from the same manufacturer should make sourcing and storing spare parts a bit easier. It also means all the drivers should be able to operate every machine.

GPS is fitted to everything – it’s the best way of maximising output and controlling fuel usage. In the future this should play a big part in implementing controlled traffic farming, too.

Developing a no-till system in Ukraine will be a challenge. Each piece of land brings its own difficulties – location, soil type and a lack of information on previous cropping – and it has a bearing on which crop is grown.

We plan to grow wheat, sunflowers, maize and soya, but the extremes of winter weather mean the rotation is predominantly spring sown. Headlands will need subsoiling where they’ve had lots of heavy traffic running on them, and the investment in a chaser bin should help reduce future compaction.

The biggest problem with no-till systems in Eastern Europe is changing people’s mindsets. They can’t get their heads around the fact that fields look messy from previous crop residues and the temptation is always to pull out the plough.

The best way to solve this little problem is to sell all the kit on the farm. It’s gung-ho and a bit dangerous – it’s nice to have the safety net of a plough tucked in the back of the barn – but it guarantees we’re all singing from the same sheet.

Seed rates are on the high side for several reasons. Firstly, germination is generally low for Ukrainian wheat varieties, and I’ve found that European varieties do not like the bitter winters in Ukraine. Wheat out here also tends to tiller less – you’re most likely to get one or two tillers per seed.

We ended up going for a wheat seed rate of 279kg/ha and the plant count going into the winter is 500 plants/sq m, but I’m not sure how the no-till system will cope with the winter weather. Time will tell, I guess…

Robin Jewer is the senior farm manager and agronomist on a rapidly-growing 4,000ha start-up farm in central Ukraine. Crops include wheat, sunflowers, maize and soya. He previously worked as farm manager on an 18,000ha farm in southern Russia.