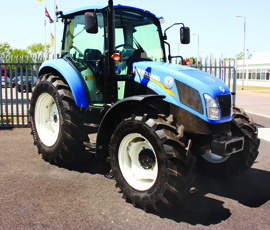 UK sales of tractors and combines have not exactly been sparkling for any maker in the last few months, but New Holland says that prospects for the second half of 2013 are looking good.

At a press conference at NH’s Basildon plant last week, UK managing director Andrew Watson said that the 25% drop in tractor sales across all makes in the first half of the year looked to be ending.

In fact, he said, the upturn started before that; however the three to four month gap between a farmer signing the deal and the tractor being registered means that it takes a while for the trend to show up in the sales figures.

Sales of combines for the 2013 harvest were some 40% down on the 1,140 figure achieved for the 2012 harvest. That sounds like bad news, but last year’s figures were unusually high thanks to good grain prices and yields, so it’s more a case of the market returning to a more normal level. “It was a big peak that could not be sustained,” says Mr Watson. This year’s sales are likely to return to the market norm of 750-800 new combines a year.

Changes to capital allowances have also had the effect of pushing up sales (or sometimes bringing them forward).

Forager sales are also looking good, partly thanks to the new markets opening up in Eastern counties of the UK for chopping maize for biodigesters.