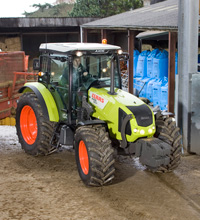 Tractor sales steadied themselves somewhat in June, with 1686 new machines sold. That’s just 6.1% done on the same month last year, leaving sales for the January-June 2009 period just 42 units down on the same period in 2008.

Given that 2008 was a record year, 2009 is holding up remarkably well, says industry body the Agricultural Engineeers Association. But with prices of cereal, milk and some livestock lower than in 2007/08, it expects a quieter second half of the year.

Arable farmers are traditionally the biggest new tractor buyers, so manufacturers will be watching the progress of harvest with great interest. The area sown is down and prices have been weakening lately, says the AEA, but stocks remain modest and a lot depends on the weather over the next two months.