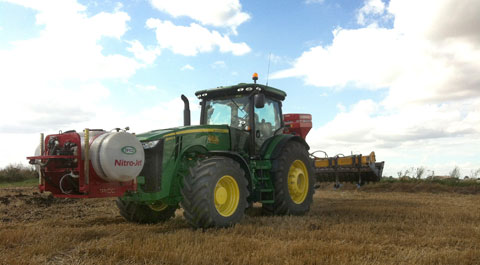 With 1,500 acres of arable, 300 acres of potatoes and 200 acres of onions, Matthew Latta is a busy man. At his farm near Holme Fen Drove he grows combinable crops as well as potatoes for chipping, processing and onions mainly for the pre-pack market.

Getting granular ammonium nitrate on to the crop at a rate of 60kg/ha after drilling had been done by a contractor using a Simba Solo and Stocks Fan-Jet for five or six years and then a second dressing from the farm’s own Amazone ultra fertiliser spreader.

The results were good, he says, but he was keen to get the operation back in-house to reduce the cost. The answer was to shift to Opico’s Nitrojet, which dispenses liquid fertiliser via a strong-looking TWB seven-leg subsoiler.

As well as cutting the cost/ha of the operation, this has boosted accuracy by dispensing the fertiliser in narrow bands rather than spinning across the whole width of the machine. Typical application rates are 100 litres/ha, amounting to a 40% saving in nitrogen.

The liquid fertiliser is also placed closer to the seed so the roots get to it quicker than with granular fertiliser.

The same unit is also used at potato planting time. Under the previous system, a Microband granular applicator placed fertiliser in the row at planting time. However granules had a habit of bunging up the machine on damp mornings, requiring constant vigilance on the part of the operator.

Moreover the mechanical chaindrive on the metering system could be awkward to calibrate, he adds, and the sprockets can be laborious to change.

The four-tine toolbar he now uses mounts between the tractor and Standen planter and applies liquid N in bands. Application rates can vary between 200 and 400 litres/ha.

Swapping over from OSR to potatoes is relatively simple, with the tank mounted on the front of the tractor and restrictors in the distribution manifold changes to allow for increased application rates.

Per-hectare costs of the liquid application system are slightly higher than with granules, he admits, but that is more than outweighed by the fact that the fertiliser gets to the plants quicker.

Liquid fertiliser is easier to work with, too, he says, with the tank easy to flush out. The tank is easy to put on and take off thanks to quick-release couplers and a 1000-litre IBC and self-contained pump mounted on a flatbed trailer makes for a useful a nurse tank.

So what’s the next step? Mr Latta reckons it could be variable rate N application. He already has an all-singing-and-dancing Topcon RTK system with +/- 2cm accuracy that is giving better potato and onion seedbeds, less compaction and more precise spraying. Variable-rate application via the Nitrojet unit could be on the cards, though maybe not quite yet.