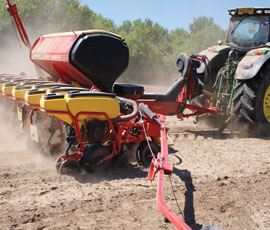 Vaderstad claims the new seed metering mechanism developed for its Tempo drill outperformed rivals in trials in Germany by achieving the lowest number of seed doubles and misses and maintaining its accuracy at up to a remarkable 18kph.

The Gilstring metering unit, named after the Vaderstad engineer who developed it, uses three singulation wheels plus a sensor to count seeds individually. It is pressurised to avoid variations caused by vibration or sloping ground, and the complete unit is based on a 28 seeds/sec delivery rate, equivalent to an 18kph working speed.

Each unit is powered by an electric motor to avoid the inaccuracies and maintenance needs of chain drives. A pto drive operates the fan that pressurises the metering units, and it also powers a generator producing electricity for the metering unit motors.

In tests by the Swedish maker comparing the accuracy of the Tempo system with that of rivals, the Vaderstad drill was said to be slightly ahead at speeds up to 7kph, with all makes achieving less than 1% of seed doubles and skips or misses.

However, faster speeds widened the performance gap significantly, says the company, with doubles and skips averaging 5% for the other makes at 15kph while the Tempo was still under 1%. At 18kph the fault score for rival machines was more than 9% but the Tempo was apparently still below the 1% threshold.

Mounted Tempo drills are available with six or seven rows, and there is also a trailed model with six or eight rows. Row space settings for both versions are 700, 750, 762 and 800mm, but the absence of wheels on the mounted drill also allows narrower 600 and 650mm spacings to be used.

The eight-row trailed Tempo, expected to be the preferred model in the UK, has list prices starting at £46,000 and rising to £64,000 for the full specification version for applying fertiliser and microgranules.

Launching the new drill in Norfolk, Vaderstad UK’s managing director, Mike Alsop, said that maize acreages are likely to expand rapidly because of the crop’s use in anaerobic digesters plus an extension of the cropping areas due to climate change.

The drill’s UK maize-only recommendation is likely to be a temporary measure, he explained, as it is already approved for additional crops overseas, including sunflowers and sorghum.

“Testing is also being carried out with other crops grown in this country and a sugar beet version could be available by about 2015,” said Mr Alsop. “I think oilseed rape is another possibility; it used to be considered a low-margin crop to be sown as cheaply as possible, but there is increasing interest in better establishment. There are plenty of other possibilities for the future, and we might even use the same metering mechanism for cereals.”