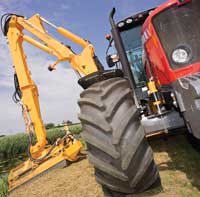 Watercourse management used to be solely the responsibility of the Environment Agency, now it’s something that environmentally conscious farmers and contractors are increasingly having to take account of to meet tightening regulation.

Lincolnshire firm Mastenbroek has always been a big player in this market, with a range of equipment to help contractors and farmers keep waterways clear in the short operating period available.

Although the EA is the single biggest customer for these type of machines, there’s a growing demand from larger contractors and farms keen to manage the environmental regulations themselves, says sales manager Paul Clayton.


“There’s a short window of opportunity for drain clearing because contractors can’t start mowing until 1 July, so machines have to be robust enough to do 1200 or so hours in a short period of time and they need to be flexible enough to complete a range of tasks to make them viable.”

And that’s where the Dutch-made Herder mowing arm comes in, he explains. “If a contractor is going to buy a unit for watercourse management, it’s quite an investment. But Herder arms are tool carriers rather than fixed mowing arms.”

What this means is that as well as traditional flails, mowing buckets, hedgecutters and even spraying attachments can be fitted to one unit.

The range consists of four models: The Grenadier, the Cavalier, the Frontier and the recently-launched Rapier model.

The mid-mounted Grenadier accounts for the bulk of sales, explains Mr Clayton, particularly in Holland. Offering up to 11m reach and with numerous hydraulic options, it’s the most heavy-duty and sophisticated machine on offer.


The Cavalier, a smaller version of the Grenadier with reach of up to 7.5m, is targeted at the export market, he adds. The mid-mounted Frontier is smaller still and used for canal and riverside work in built-up areas.

New at the open day was the Rapier MBK 180, a simpler mechanical three-point linkage mounted mowing arm with 180% slew allowing right or left cut. Fitted with a support wheel which lifts when in transport, it generally carries a 2.25m head unit and has a maximum reach of around 5m. Also new in the UK was the Conver Silt Pusher. Conver, another Dutch company, offers a range of boats for watercourse management, including this diesel powered model which is essentially a floating bulldozer.


Used in Holland to remove silt build-up in ditches and waterways, it’s fitted with a three-piece dozer blade, adjustable tail piece and auto-spooling winches which are connected to fixed points to drag the unit to and fro, scraping the bottom of the ditch or canal.