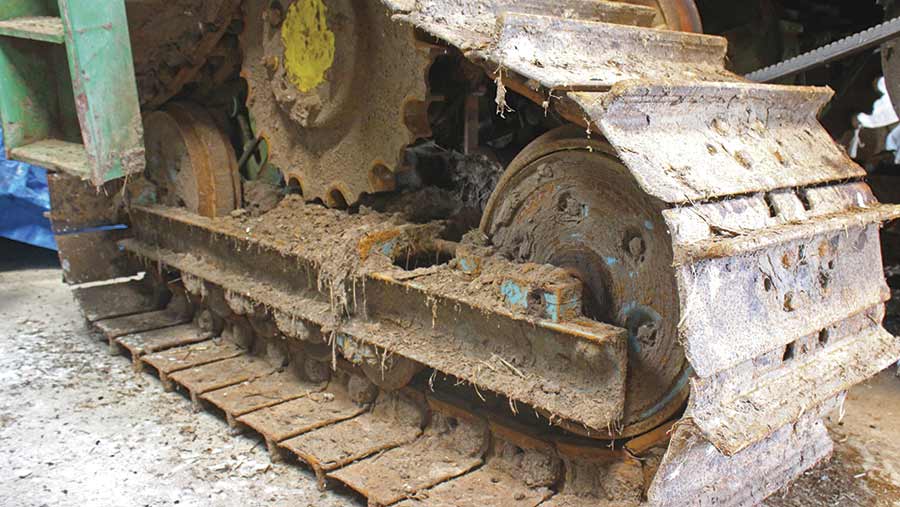 Farming on the Orkney archipelago in the north of Scotland throws up challenges unlike anything on mainland Britain.

The biggest of those is the weather – the Gulf Stream brings beating rain, relentless winds and humid air across from Central America.

It makes Orkney’s climate much milder than other places across the same latitude – but it also guarantees cool, wet summers that plague arable farmers in the region. 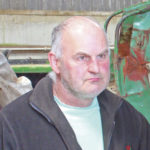 Things got so bad in 1998 that contractor Keith Foubister resorted to building his own set of tracks for a 14ft-cut John Deere 975 combine that was his frontline machine at the time.

“It was a particularly bad year – the cattle were only on grass from June to August because the fields were in such a state and we were so short of straw that round bales were selling for £30 a piece,” says Mr Foubister.

“One chap didn’t even get the combine’s back wheels off the road before getting stuck and grain was coming off at well over 30% moisture.”

At the time, the concept of tracks on a harvester was novel – you had to wait until 1997 to see the first of Claas’ TerraTrac-equipped Lexions – and four-wheel drive kits were rare, too.

Watch his tracked combine in action.

Mr Foubister started the modification as a mid-harvest panic mission, so with swathes of cereal crops still standing, there was little time for planning.

The process was fraught with challenges, including how to jack up the combine to get started.

“We needed to get at the axle with the wheels off, so finding a safe way of hoisting the combine off the ground was near impossible.”

To keep things simple, he used the same driveline as before. He replaced the standard wheel with a 1m diameter sprocket to transfer the power to the track.

The downside of that was the reduced circumference, which meant travelling in a higher gear in the field and a limited top speed of 15kph.

The drive sprocket sits at the top of a pyramid structure. At either end of the ground-running section are two idlers that sandwich another two wheels to make sure the whole of the track remains in contact with the ground.

The idlers are fitted on a walking beam-type axle to reduce the horrendous strain of the combine’s weight on a small pressure point as it negotiates uneven ground. 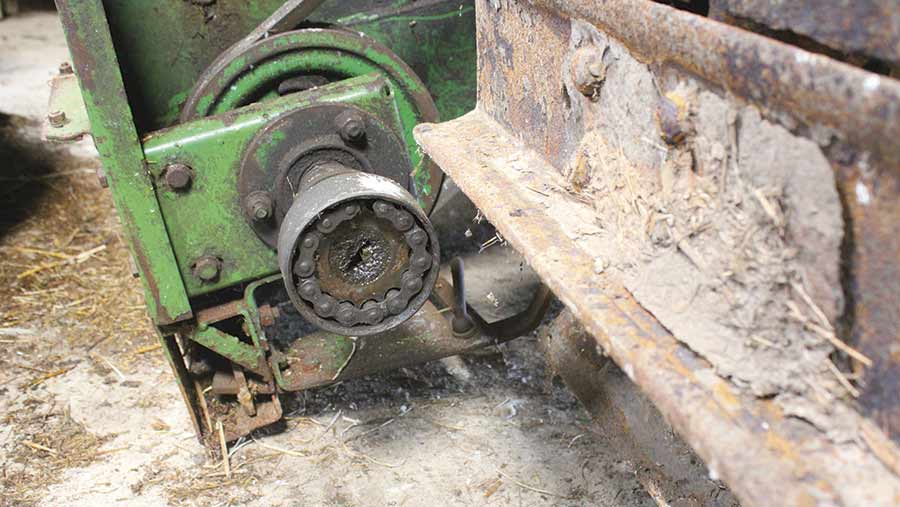 Where did the tracks come from?

The metal tracks were sourced from a forestry machine. Rubber versions were also available, but Mr Foubister deemed them unable to provide the sort of grip required across saturated stubbles.

Instead, aggressive 50mm lugs weigh 30kg each and provide maximum traction, but also cause serious damage to hardstanding in the yard, so it’s a low-loader job to shift the machine between fields.

Adding the track arrangement lifted the combine by almost 300mm, so he also fitted bigger rear wheels from a dump truck to make sure the threshing system was running level.

There was also the minor job of altering all the pipework and guards to make space for the new running gear. The device for reversing the drum had to be removed and the steel pipework to the header was replaced with rubber tubes. 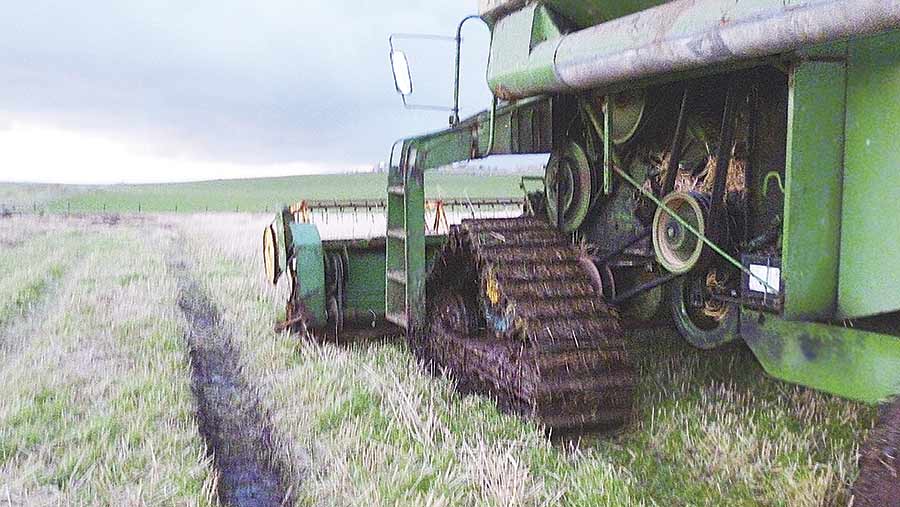 In the first year it harvested almost 125ha, but it wasn’t a complete success.

“The ends of the track lugs caught the header drive, which meant we had to run the combine table high and leave a huge stubble.

“Still, no one complained about the high stubble that year. Usually the farmer trails the combine looking for wasted grain, but they were just so glad to get it done that they weren’t bothered.

“We thought about driving the header hydraulically, but there just wouldn’t have been enough power from the relatively small pump to run it along with the steering and lifting rams, so in the end we lengthened the intake housing by 430mm instead.”

How was it to drive?

“It wasn’t any noisier during work than with the wheels fitted,” Mr Foubister said.

“People thought it might be tougher on the transmission with the tracks, but we found the opposite – wheeled machines ploughing through boggy ground put a massive strain on the driveline.”

Mr Foubister actually found he had to pull the grain trailers out of the field as well as harvesting the crop as the tractors were getting stuck, too.

Claas has been fitting tracks to its combines for decades. The first Lexions to be launched in Europe with rubber tracks came in the shape of the 480, 460 and 450 in 1997.

However, go back as far as 1989 and a Commandor 115CS wowed the crowds at the Royal Show when it was fitted with a set of full-length rubber tracks. 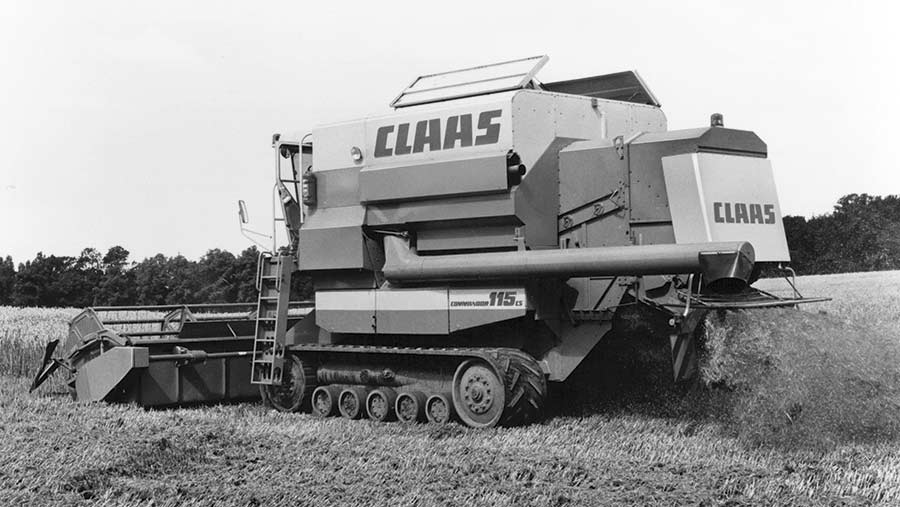 Has it been tweaked since?

The second version was even more drastic. It saw the combine cutterbar ditched altogether in favour of a forager pickup at the front.

“We ran through the cereal crops with a two-drum, 10ft cut mower before picking it up with the combine. Obviously the barley was way past its best, but we tried to collect what we could and managed to get a few trailer loads.”

That system actually worked better with a flat crop because the mower can’t throw the material about so much and grain loss is reduced.

“If you mow it and leave it a day then it lets everything crisp up a bit – including the chickweed – and reduces the losses slightly.

“That said, you could hardly see the barley for grass that had grown through. It wasn’t perfect, but was a salvage job because the next crop needed to be drilled.

“Such extreme situations are fairly rare, so the combine has been parked in the shed for the past couple of years and we use our John Deere 1075 instead.

“Most of the farmers on the islands have geared themselves up for bad weather with four-wheel drive kits for combines and foragers, but you never know when a really wet summer might strike again.”

If you’ve been busy building something a bit different in the farm workshop, it’s time to get your entry in for this year’s Farm Inventions Competition by emailing oliver.mark@rbi.co.uk.

Just send us a few details about your creation, including why you decided to build it and how you put it together, as well as a high-quality picture or two.

Remember, there are three categories: simple, intermediate and complex, so whatever the scale of your project, there’s a chance you could win one of six cash prizes.