Agriculture, in many ways, bucks the trend of the economy. When there is a weak pound, shipping produce abroad is worthwhile as farmers are actually receiving a better price for their wares.

It’s a similar story with farm subsidies as these are dished out in euros, so a favourable exchange rate means a few extra quid for the farmer.

March is still the month when manufacturers tend to see a healthy jump in sales. Some farmers may keep some cash in reserve in case of a disastrous harvest or disease outbreak and then splash out on some shiny new metal before the tax man takes his cut.

See also: What farmers bought in 2012

An increasing trend for UK manufacturers is to dip-a-toe in the overseas market as many of these remain untapped.

Half of units shipped abroad are tractors, mainly coming from Basildon (CNH) and Uttoxeter (JCB), but there are still big markets for other equipment such as sprayers.

So how did 2017 shape up? Was it a year that encouraged more investment with the significantly weakened pound, or did the continual uncertainly about what the politicians are doing in Brussels stifle any machinery purchasing?

Established in 1875, the AEA collects statistics from British manufactures and suppliers of farm machinery and acts as their voice on a national level.

There’s nothing unique about the news that big seems to be better for most buyers. The largest horsepower sector is now 140-200 whereas at the turn of the century, this was the 100-120 bracket. 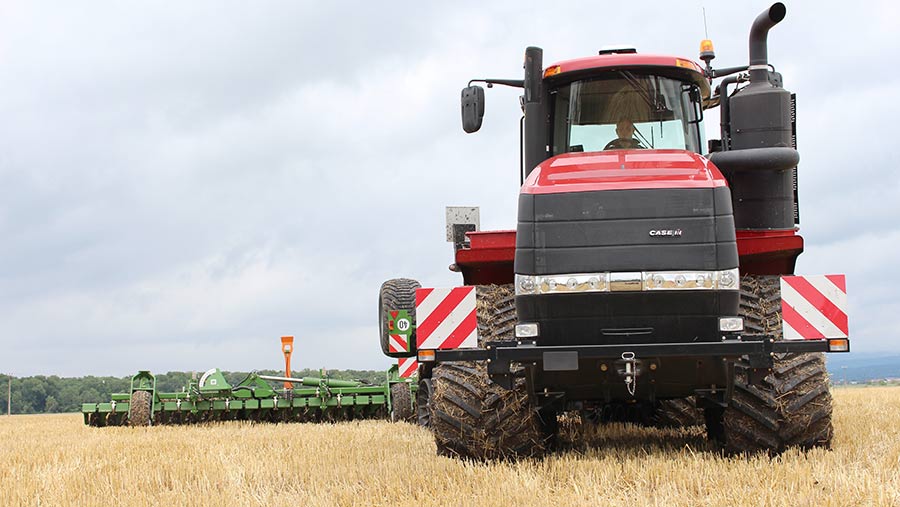 Due to pinching budgets, there is no longer the luxury to have a machine for every job so having a capable all-rounder, which can turn its hand to feeding animals in the morning and dragging a plough in the afternoon, is key.

Last year saw 12,033 tractors registered in the UK, which was way above the 2016 figure of 10,602 and also accounted for the first yearly rise in registrations since 2011.

Average horsepower continues to climb – up by 2.4% on 2016 – with the typical tractor sold having 162 horses under the bonnet. Compare this with 2008 figure of 138 ponies, and it’s been a steady growth as farmers have demanded more power from fewer machines.

Having a loader on the front of a tractor may be a great way of saving a few quid for those who can’t justify the expense of a telehandler but in reality it’s steady market. 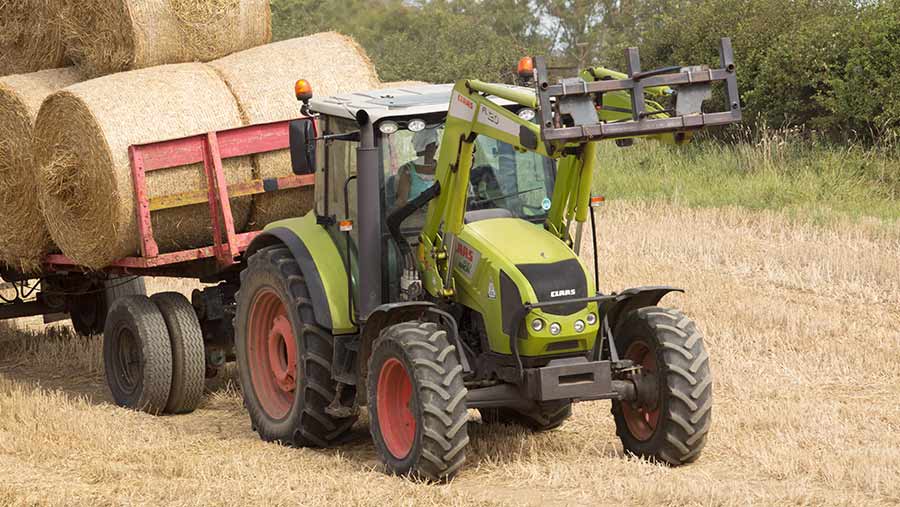 Last year saw 3,350 loaders shifted, which is 525 units lower than the 2012 figure and does highlight that the appeal of low-powered tractors is decreasing, with a large chunk of these models having a front-loader attached.

The ever-dependable telehandler hasn’t pulled up any trees either with its 2017 sales and remains steady, although a 17% rise on the previous year will be welcomed by loaders salesman, but should be viewed as short-term rather than long-term growth. 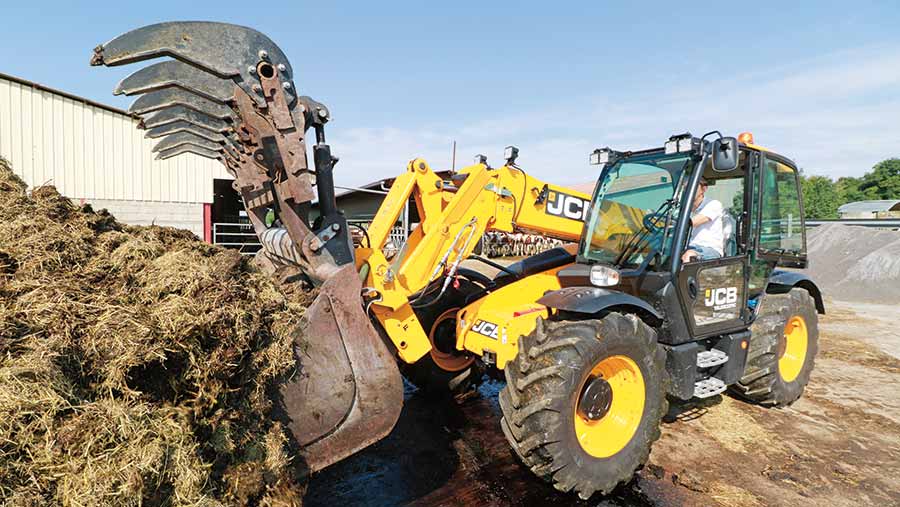 A large self-propelled can now cost the fat end of £270k, depending on what colour machine you prefer, which means that replacing one is a carefully thought out and mulled-over decision. 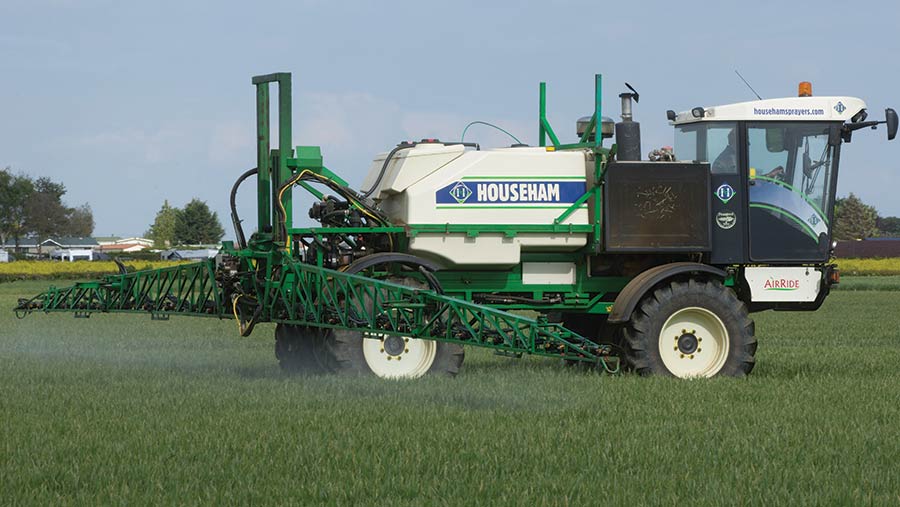 Some 780 new sprayers were sold into the UK last year, with the headline news that 270 of these were self-propelled, down 20 units from 2016. This figure stood out even more as the trailed sprayer market rose by 7%.

Mr Howarth says there has been a slow-down in sales of large-acre sprayers. Farmers who may have traditionally replaced the sprayer every three years, may now squeeze an extra year out of the machine due to the lack of confidence in the Brexit outcome.

Behind tractors, sprayers account for a decent dollop of the export trade, with British brands such as Bateman, Knight and Househam all reporting growth abroad.

Since 2011, combines sales have plummeted, but this figure hides the increased size of the average machine sold today. 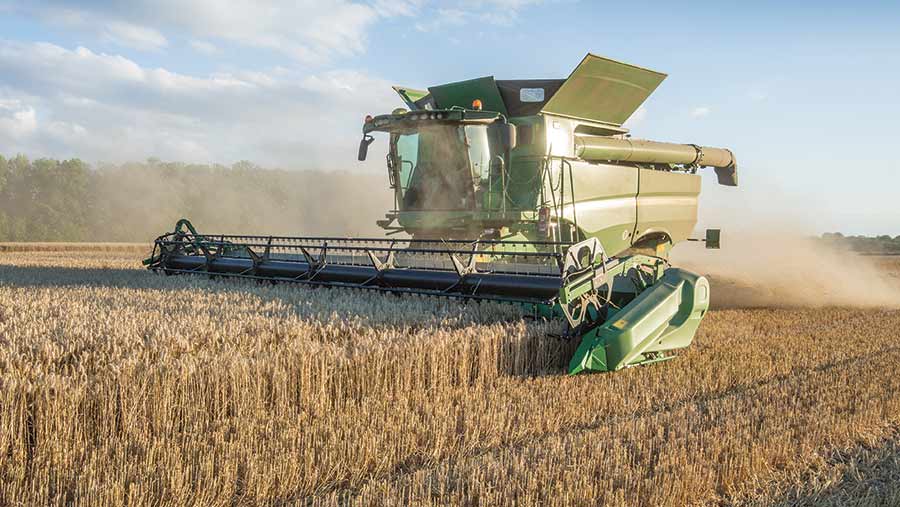 The calendar year figures indicate a rise of 20% in combine sales, but this doesn’t represent a real-life account of when farmers buy combines, with negotiations usually happening after harvest and concluding by the following April.

The market sits around 750 machines per year so the feeble 530 combines sold between September 2016 and August 2017 indicates that farmers may be keen to hold onto machines for another year.

Rotary combine sales topped 300 units and still have the edge over the conventional straw walker machines, which were down at 230, although this split has remained constant.

In a similar theme to self-propelled sprayers, farmers are cautious over replacing these big-ticket items, despite a strong finish to 2016. 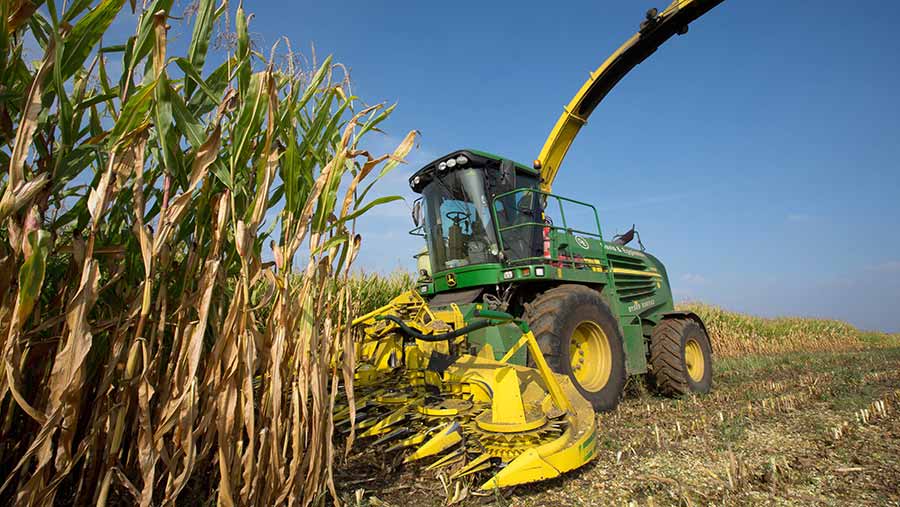 Only 135 foragers were bought in 2017, which was down on the previous two years, but this hides an above average short-term trend. The latest figure is around the expected level for foragers, although some way off the 2010 peak of 180 choppers sold.

The varying fashions for cultivation techniques seem to change quicker than a newborn’s nappy, which is why plough sales showed a 20% increase in 2017 as farmers bought 800 new units, with the humble four-furrow model the best of the bunch. 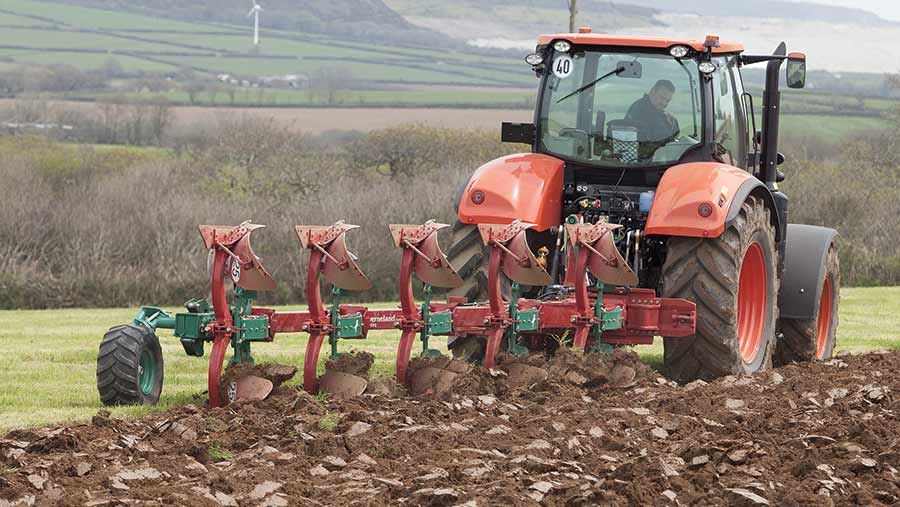 Blackgrass isn’t going away and farmers are having to turn back time using tried and tested methods to eradicate the problem weed.

To complement its soil-folding friend, the robust and faithful power harrow maintained some decent sales in 2017, with drill combinations still popular. 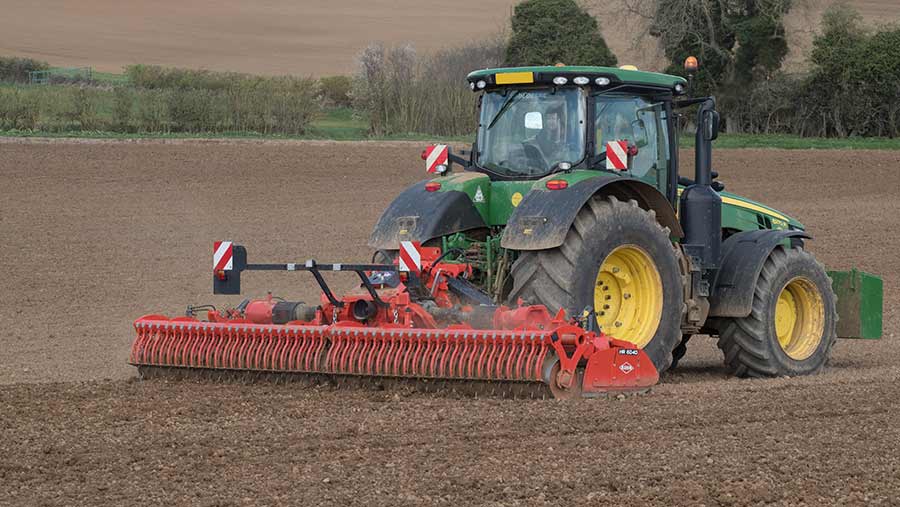 Although 2017 saw only 950 machines sold, which is a some way short of 2011’s figure of 1,370, it’s still respectable from a machine considered almost dead and buried not so long ago.

Mounted drills accounted for 375 of the 650 units sold in 2017, with almost all of these being under a 4m width. The trailed market gobbled up the rest with 275 units nearly all wider than 4m. 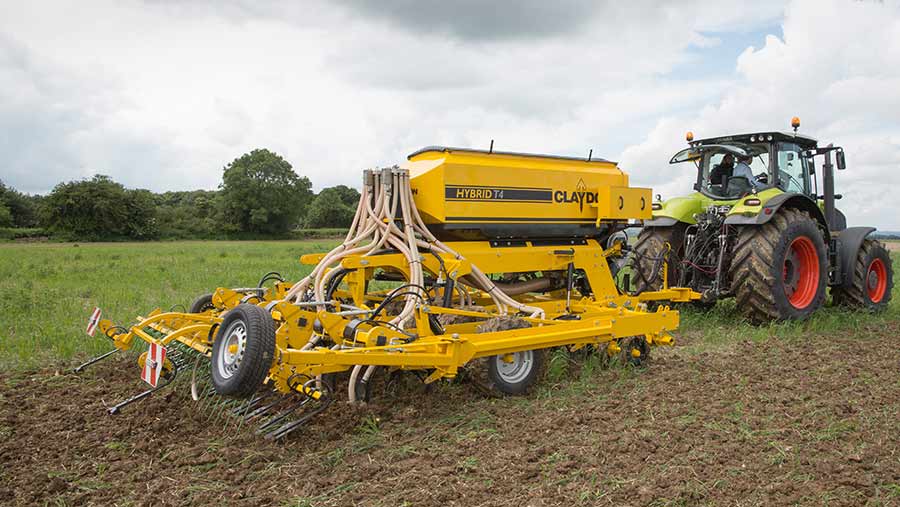 Mr Howarth says large-scale drills have seen a slowdown over the past year, mainly due to the high-ticket price, but increased spring cropping areas may also have affected this.

Growers might favour a smaller, lighter drill to get on the land earlier in the spring and wait to replace the main drill as workload becomes more spread out. 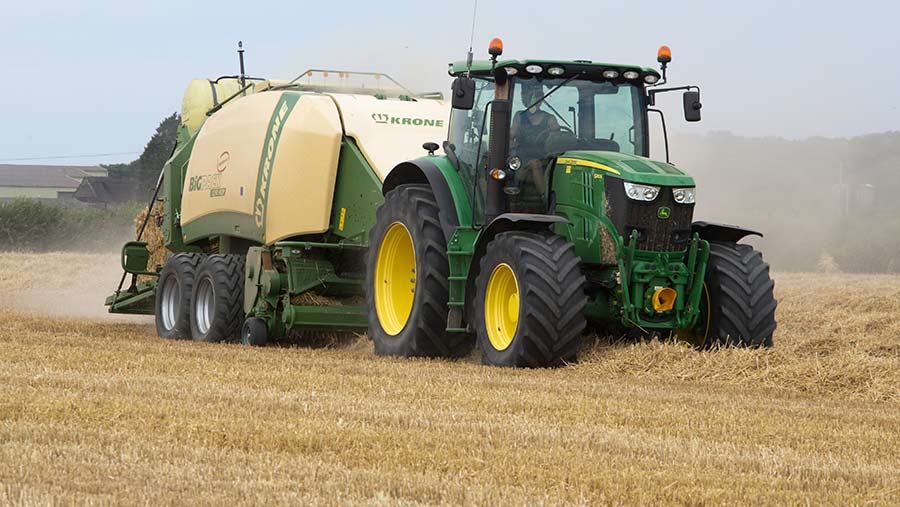 Big square balers seem to be the contractor’s favourite for hoovering up huge swaths of straw from modern combines, but it’s the faithful round baler that holds the keys to the lion’s share of baler sales.

Deals for round balers hung around the 1,000 unit-a-year mark, proving they are still the ideal machine for the majority of farmers who produce their own bedding and feed.

Large square baler sales are up and down like a yoyo. 2017 was a good year, seeing 225 models sold, up on the previous year but someway of the boom experienced in 2012 of 315. 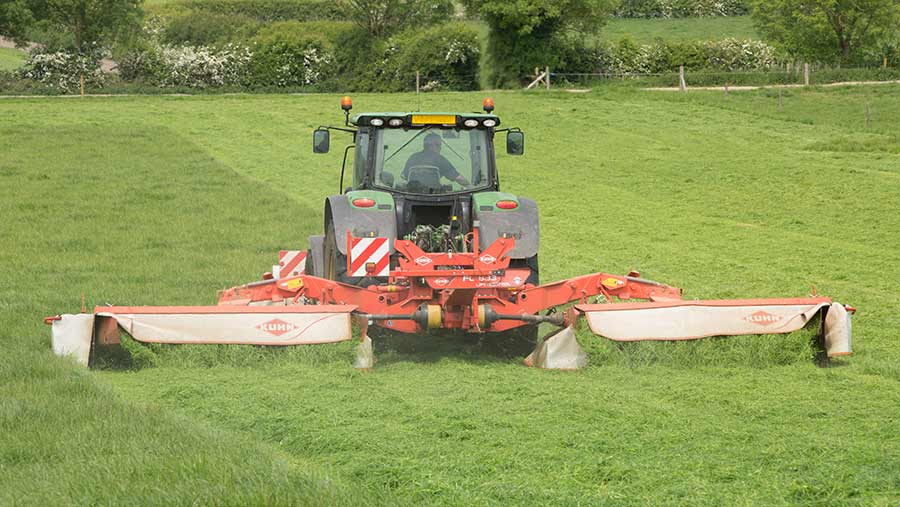 As long as grass will grow mowers and conditioners will still be in high demand. Not requiring investment levels similar to that of self-propelled machinery, the market has remained fairly stable.

In 2017, 2,100 mower conditioners were sold, which nearly eclipsed the 2008 peak of 2,175, while most grassland equipment experienced some growth.

The AEA member forecast for 2018 is more of the same with a slight increase possible in certain areas. January’s tractor registration figures indicate a positive start to the year, up 64 units on January 2017.

It looks as though farmers will choose between two competing schools of thought: do they spend subsidies while they have them in fear that there may be less money when Brexit happens, or do they sit tight and keep hold of cash so there is a buffer to take up the slack after we leave but risk being left with an ageing fleet.