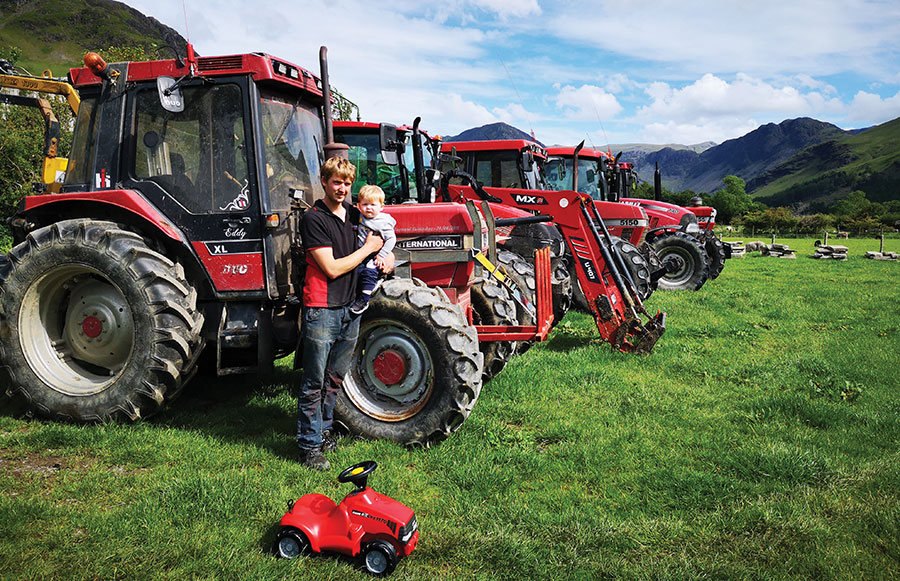 The latest instalment in our long-running What’s in Your Shed? series features 27-year-old Cumbrian livestock farmer and contractor Edward Beard.

He reveals the best and worst of his largely Case-branded machinery fleet, with tractors ranging in age from a long-in-the tooth K-reg 1455 to a brand-new Puma 165.

I grew up in Cockermouth, but my grandad really got me into farming. I was offered the tenancy of a 40ha farm, plus fell rights, when I was 18 and straight out of college.

I started with 250 sheep and eight Galloway cows, along with an old Case 895 tractor and McHale wrapper. 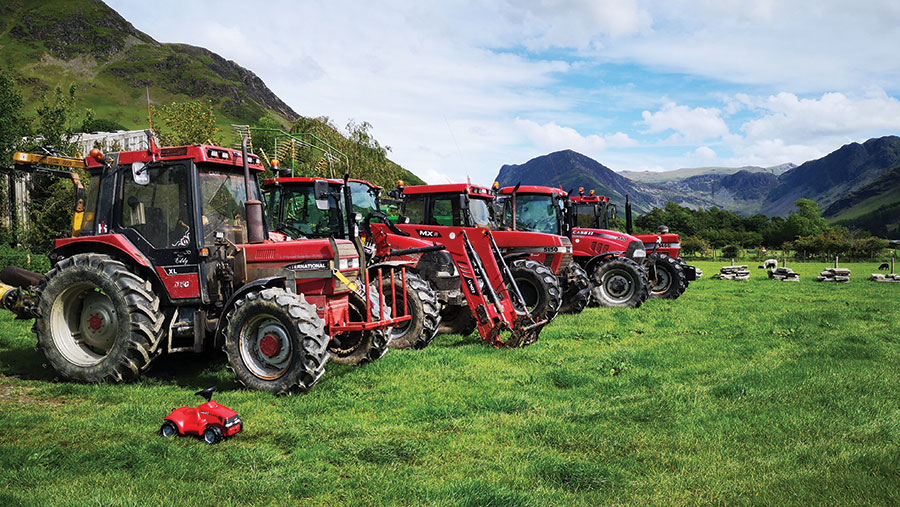 It was a steep learning curve and it took me several years to start making any money.

Somehow, I scraped together the cash for a Case 5150 and began taking on more land, to the point where I now have 180ha, 800 sheep and 65 Blue Grey suckler cows.

Alongside the farm, I offer contracting services, including mowing, tedding and baling.

But the thing that keeps me busiest is fencing – I did 12km last year, a lot of which was done by hand for the National Trust and River Trust.

That said, the new tractors don’t excite me quite as much and I occasionally mull over the idea of getting an old Fendt. 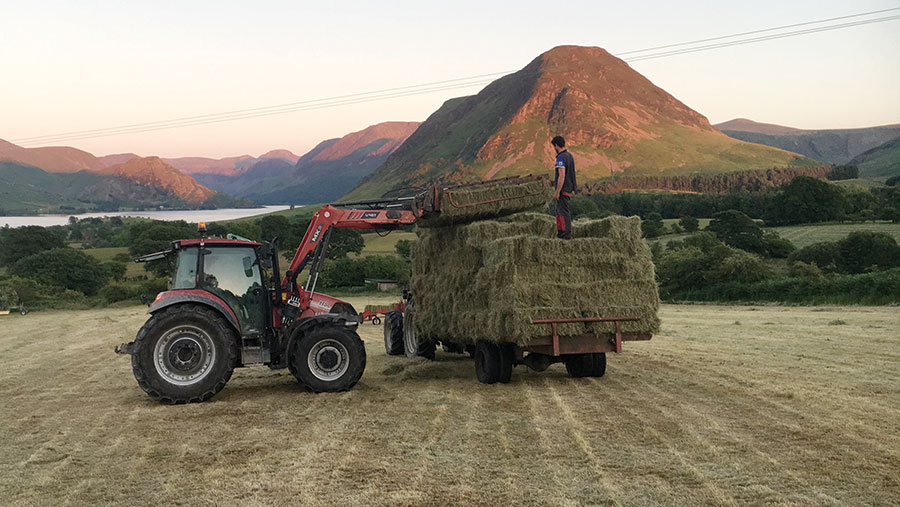 CT Hayton at Wigton is my go-to for tractors – the Puma and Farmall came new from there and the JXU and Maxxum were second-hand.

Their service is good and, more importantly, the man in the parts department knows exactly what he’s talking about.

For most other stuff, I tend to use David Johnson Agricultural Engineers at Broughton-in-Furness. They’ll source pretty much anything, can be contacted at any time of day and I love how brutally honest and straight they are.

They’ve also just moved to a smart new premises and must have one of the biggest workshops in Cumbria.

My undisputed favourite is the Case 5150, but we’ll come to that later. Apart from that, it’s my new 9t Takeuchi digger kitted up with a Wrag post knocker.

It’s far more stable than a five-tonner and has the reach we need to get into awkward places – it’s already been in some fairly gnarly locations on the fells.

Least favourite is the McHale Fusion 2 baler wrapper, though it’s because of the way I run it, rather than its performance.

There are too many buttons to think about while concentrating on changing gear in my old tractors, particularly because most of the work is on hills.

That said, I wouldn’t change it and the weight in the bales is amazing – I usually make 5,000, but expect to add another 1,000 this year.

A brand-new Puma 165, which arrived just before Christmas. I also picked up a second-hand Walter Watson Spiral Blade Aerator for £4,800.

It was recommended by several farmers for alleviating soil compaction caused by sheep.

It is far heavier-duty than other aerators I have tried before – 6t fully laden – so should penetrate the ground a bit better. 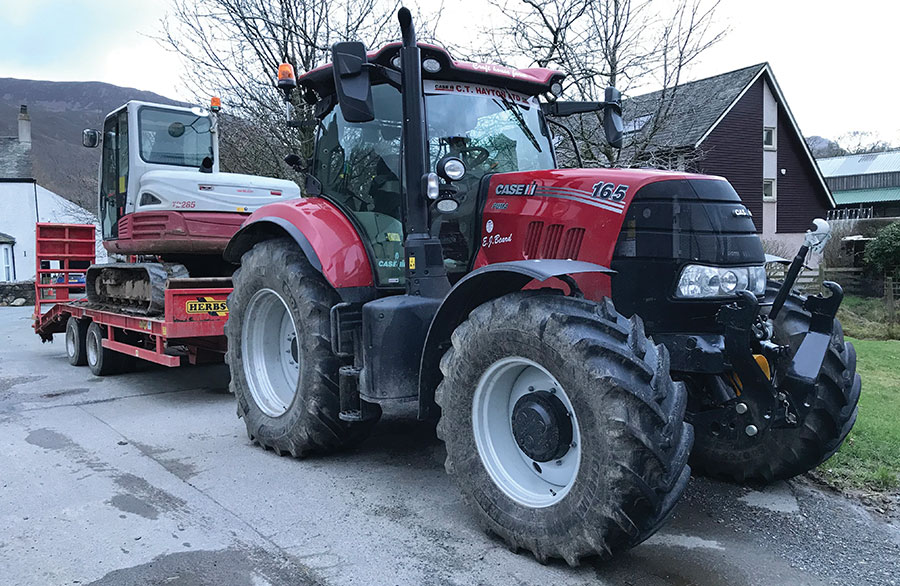 I could have sold it for £28,000 last year, but chickened out at the last minute.

Last year, it ran the Fusion and hauled trailers – it’s ideal for the job, as it has so much power and torque.

It’s also pretty heavy, which is important because the Fusion can weigh 8t with two bales on the back.

However, the 35kph top speed is a bit slow and I’m getting more reluctant to use it in case I blow up the engine.

As long as possible – I wouldn’t buy any of the kit when it is finished here. I usually chuck it in a collective sale when it’s no longer useful.

The reality is that, until the past couple of years, I haven’t been able to afford any really decent machinery. But I’m now in a position where I can be a bit more selective about what I buy.

Hopefully I can add to the Case tractor collection with a baby brother to the 1455, so either a 956 or 1056. It will be an investment, as I can’t see them dropping in value.

Ideally, I’d like to upgrade the trailers as well – I’m keen to get everything on commercial axles with a Tilly Pass certificate, particularly given the steep hills, narrow roads and abundance of tourist traffic around here.

I once reversed the 21ft livestock box into a parked car, pulling off the back wing and shoving it into a dyke.

It wasn’t really my fault, though – I’d met a local service bus on a single-track road and had to back up, but the car was parked on double yellow lines at a passing point with no sign of the owner.

The Maxxum 140’s back-end. The handbrake had been sticking and, while I was on a dual carriageway near Penrith, the disc shattered. It destroyed the crown wheel and pinion, casing and the brakes.

The bill was £7,000, but the dealer offered to knock the cost off the price of a new Puma, which was all the incentive I needed to expand my tractor fleet.

I saw it at Lamma and bought one for £600 – a small price to pay for accurate fertiliser spreading and field mapping.

I recently upgraded some of my Makita tools to Milwaukee and I’m seriously impressed. The 3/4in impact driver is a beast for rattling off wheel nuts, so I’m already eyeing up the 1/2in-drive version.

Favourite: Mowing, as it is fast and satisfying to see the work you’ve done.

The reason I bought the Fusion 2 is that my main part-time employee got himself a demanding girlfriend who wouldn’t let him work late, so I needed to make the baling and wrapping a one-man job.

I recently bought an Isuzu D-Max Blade on 18,000 miles. It replaced a Rodeo and seemed like a good deal – £18,000 for built-in satnav, leather seats and 3.5t towing capacity.

My runaround is a little Y-reg, 90,000-mile Suzuki Jimny. I’ve had it a year and not yet managed to get it stuck.

It can clock up to 80 miles a day during lambing and I’ve stuck a load liner in the boot for the dogs, along with a spare battery for emergencies. 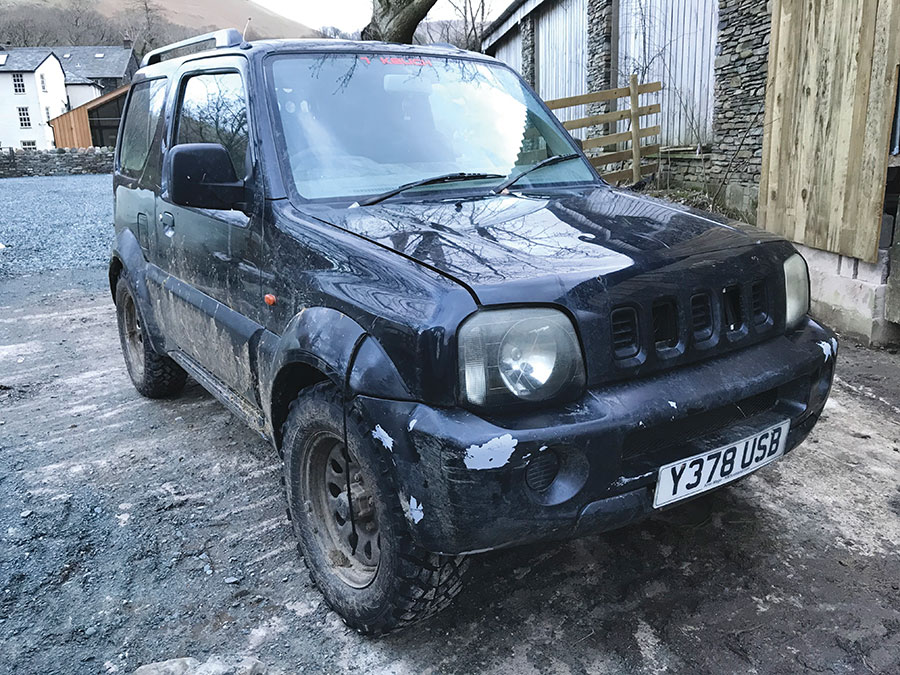 I had the head gasket done as soon as it arrived five years ago, but have had no problems since then, despite their reputation for iffy electrics.

It’s now on 10,200 hours and still goes on the rake in the summer. I’ll never part with it – it was the tractor that got me started.

An International 454 that I had for scraper duties. It had lived on easy start and the tractor was OK once it started. But it eventually drank all the oil from the sump and blew up.

The ex-demo Puma, mainly because it saved me paying the Maxxum’s transmission bill and I’ve got it on 0% finance and three years’ warranty.