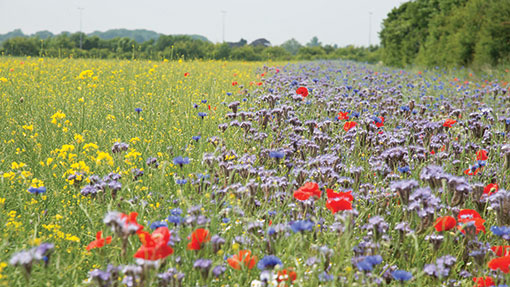 The government’s new flagship environmental scheme – due to be introduced by DEFRA following CAP reform – is “not fit for purpose”, the NFU has warned.

The New Environmental Land Management Scheme (NELMS) will replace environmental stewardship in England when the government implements CAP reform from 1 January 2015. The first NELMS agreements are expected to start a year later.

DEFRA is continuing to develop the new scheme. Further details will be published later this year. But it is already clear that NELMS will be more focused and targeted – prioritising environmental work that improves biodiversity and water quality.

In one area, for example, farmers might be reimbursed for enhancing habitats for rare farmland birds. In another, farmers might be able to apply for funding to reduce soil erosion and run-off into watercourses from their fields.

The NFU argues that this means many farmers will miss out. All farmers had access to environmental stewardship, said NFU deputy president Minette Batters. But not everyone would have access to NELMS – even though all farmers faced lower direct payments to fund it.

“It is about having a level playing field for all farmers,” Ms Batters told Farmers Weekly. “There is every chance under NELMS that many farmers won’t be able to join the scheme. It costs money to look after the environment and I think it is a tragedy to take that away.”

“There is every chance under NELMS that many farmers won’t be able to join the scheme. It costs money to look after the environment and I think it is a tragedy to take that away.”
Minette Batters, NFU deputy president

A higher level NELMS scheme would be by invitation only, based on location rather than credentials, said Ms Batters. “NELMS will be available to far fewer people,” she added. “There are some very good farmers, doing a very good job, who will be penalised by their location.”

Part of the problem is that an estimated £2.2bn of the government’s £3.1bn agri-environment budget is already committed to completing entry-level and higher-level agreements under environmental stewardship – leaving less than £1bn for NELMS over the next six years.

Criticism of the new scheme came as DEFRA sent a CAP Reform Countdown leaflet to more than 110,000 land-based agreement-holders in England. The leaflet includes a timeline of progress towards the introduction of the new CAP reform measures (see Business p20).

Farm minister George Eustice said DEFRA was determined to implement the CAP in a way that was as simple, affordable and effective as possible. “Our aim now is to ensure everyone who wants to apply for a share of these CAP funds is able to do so quickly and simply.”

A DEFRA spokesman said: “All farmers will continue to be able to apply for the new scheme, but we want this to be competitive so only those who are able to deliver the greatest environmental benefits will be accepted into the scheme.”