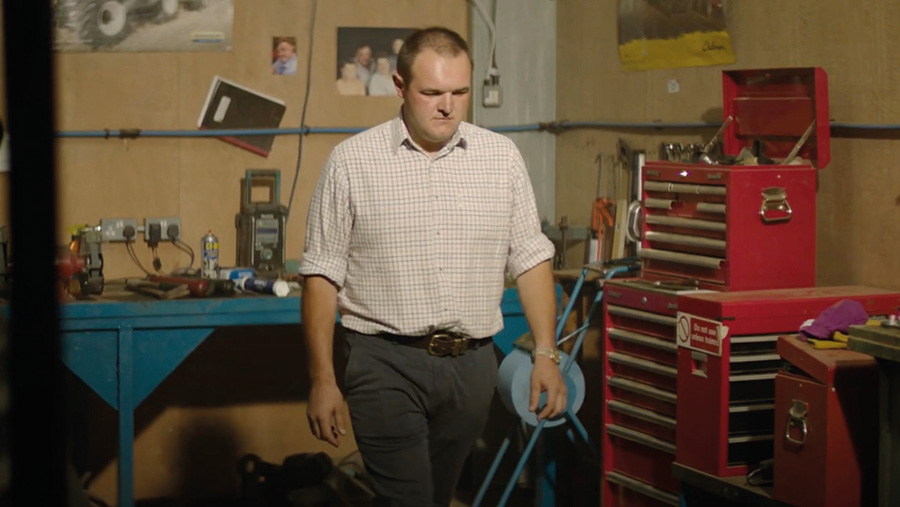 Every farm fatality is a tragedy, especially for those who are left behind and have to live with the anguish of losing a loved one and the knowledge that it might have been avoided.

Jack Fisher, 27, who runs a small family farm with his two brothers and mother at Freethorpe near Acle, Norfolk, as well as a haulage business, knows from experience, having lost his father, Peter, 53, in a freak accident involving falling bales.

He spoke to Farmers Weekly about his experience.

Can you describe the circumstances of the accident?

The accident happened in February 2017. My Dad, who had given up his farm contracting business and was working as a haulier, was picking up a load of Hesston bales from a farm near Dereham in the early hours on a Saturday, to take to the power station at Snetterton.

We had family staying that weekend from Nottingham, so he’d started early as we were all due to go out for lunch and he wanted to be finished in time.

As he was adjusting the ratchet straps, three of the big bales toppled off – each weighing more than half a tonne – and he was crushed.

It was a freak accident. Dad was very safety conscious anyway, but it just shows how easily and quickly things can happen.

Where were you at the time?

I was actually working on a dairy farm as a stockman – coincidentally right next door – and I too had gone in early to do the feeding, with plans to be done by lunchtime.

I had noticed the ambulances and police sirens and knew something had gone on, but had no idea what.

I went home, had a shower and was then driving to my Mum’s 40 minutes away when I got a call from my brothers, saying I needed to get there quick.

I was still none the wiser, but when I arrived, there were two policemen breaking the news and I could hear my Mum in a distressed state.

It seems the Dereham Police had asked the Acle Police to call round quickly as they were worried about news breaking out on social media, before next of kin had been notified.

They still could not confirm the identity – just saying that a 53-year old called Peter had died on a farm near Dereham – but we put two and two together.

We later had to go to the police station to pick up Dad’s personal possessions – it was very raw, one of those things you would never dream of happening.

What has been the emotional fallout for you?

It hit me so hard – for the first year I was adrift.

I did not want to go to work, to do my job; I was deeply unhappy.

Later that year, my then manager suggested I got some counselling.

As a Young Farmers Club member, I was able to have three free sessions with the mental health charity YANA (You Are Not Alone), which helped greatly.

I used to think of counselling as a sign of weakness, but now I see it as a sign of strength – it is the hardest thing to actually admit that you need help.

I made some very tough life choices that year, too,  including coming out as gay, which was something I’d been keeping a secret for years and had buried.

Has this experience changed your approach to farm safety?

Yes, massively. Our whole family is far more alert to the dangers.

For example, my brother has two young daughters, and whenever they are with our mum at the farm, they are not allowed near the place unaccompanied.

When handling big bales, we are rigorous about safety – never putting straps on while a lorry is being loaded, or standing blindside when someone is using a loader.

If there ever was an accident with a falling bale, we are mindful that it would be the loader operator who would be just as affected.

The other big change is that I now take more time for myself.

Yes, farming gets very busy, especially trying to complete jobs between the weather.

But we all aim to have a better work-life balance

My main tip for farmers this harvest would be to take your time and get enough rest, so you can stay focused.

It is tiredness that causes so many accidents.

And where are you now with your life and your business?

Even now, I still have days when the loss of my dad hits – especially when I’m working alone and it all comes back, maybe triggered by a song on the radio or something like that.

But things are going well. As well as running our small family farm, me and my brother are doing some contracting and running our own haulage operation – both of which are expanding.

I have also become a Yellow Wellies ambassador, helping to spread the message about farm safety.

Ironically, we still deliver Hesston bales to the Snetterton power station – the activity that cost my dad his life.

Some people say we are crazy, but you have to carry on and we get a sense of satisfaction doing the job that he did.

We take pride in that, and we really focus on safety.