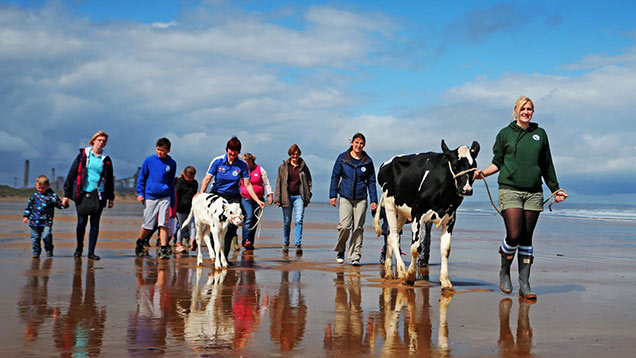 Farmers staged a day of peaceful demonstrations across the UK in their campaign for fairer milk and lamb prices – which included targeting supermarkets and taking cows to the beach.

The protests were held at four locations throughout the day on Thursday (30 July).

Holidaymakers were left stunned in Redcar, Cleveland, after farmers took dairy cows to the beach on Thursday to raise awareness of low milk prices.

Dairy farmer Andrea Chapman, from Stokesley, said she wanted to speak to the public face-to-face about how low milk prices are devastating the industry.

“We just wanted to speak to people and see if they realised the real cost of producing milk,” she told the Northern Echo.

“We need to charge 35p/litre to cover our costs, but some people are being forced to sell theirs for 20p/litre – if that goes on there will be no future for dairy farmers.

“Most people we spoke to today said they would be happy to a little bit more for their milk if it meant people didn’t go out of business.”

Meanwhile, about 100 farmers gathered outside a Tesco superstore in Morfa Lane, Carmarthen, south Wales, in a protest over falling lamb prices.

Welsh farmers complained that Tesco was selling too much foreign lamb, especially lamb from New Zealand, at the expense of homegrown produce.

The price of lamb at market is 20-30% lower than this time last year, but farmers say the price fall has not been reflected on the shelves.

Tesco said it was the biggest buyer of UK lamb, but did stock New Zealand lamb “to ensure customers have consistently high and affordable lamb year round”.

The protest, which began at about 8pm on Thursday, lasted for three hours and attracted about 250 farmers.

FFA regional co-ordinator for Cheshire Tom Houghton said: “In all the years I have been an member of the FFA, I have never seen as much frustration and anger starting to boil over.

“Farmers have had enough – they are at rock bottom.”

Earlier on Thursday, about 200 farmers took a convoy of tractors for a protest at Stormont in Northern Ireland, while ministers held crunch talks on the dairy crisis inside the building.

On Wednesday (29 July), a group of 50 farmers held a protest outside a Morrisons store in Stoke-on-Trent, Staffordshire, over low prices.

On Monday (27 July), farmers emptied milk from the aisles in Morrisons, Tesco and Lidl supermarket stores in south Gloucestershire, as part of a “milk trolley challenge” in protest over plunging milk prices.

A video of the Morrisons protest, posted on Facebook, has gone viral, viewed more than 70,000 times.

Last week, irate farmers staged a rolling tractor road blockade on the A50 in Staffordshire.